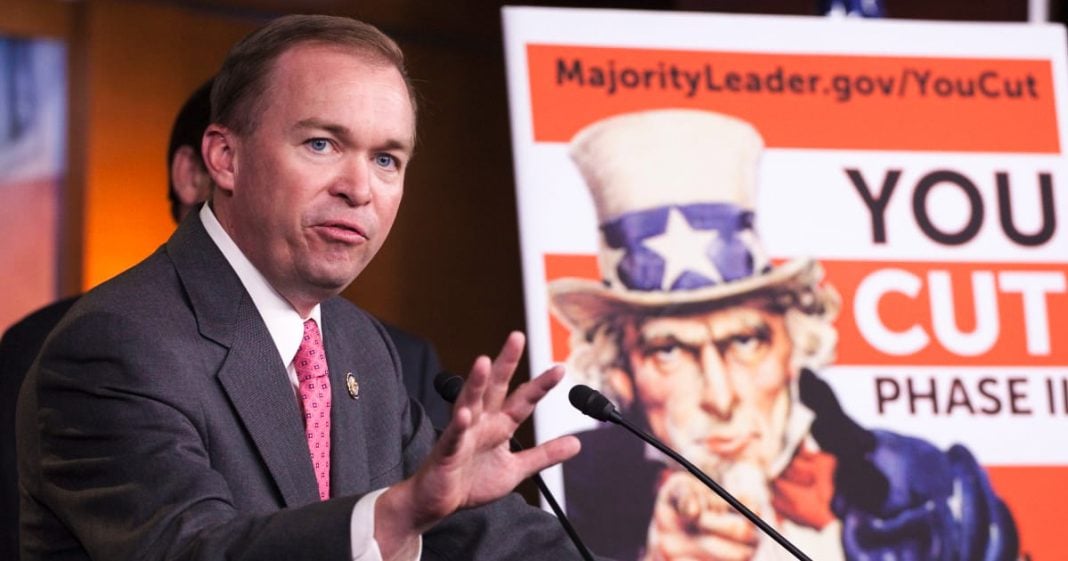 President Trump has sort of scrapped his tax plan that he actually campaigned on, and instead, he and the Republicans are going to kind of go item by item, make individual tax cuts here and there, threatening countless government-sponsored programs, but one program that could take a significant hit, affecting millions of American citizens, is Social Security. Alex Lawson, Executive Director of Social Security Works, joins Ring of Fire’s Farron Cousins to explain what Trump is proposing to do to Social Security here in the United States.

Farron: President Trump has sort of scrapped his tax plan that he actually campaigned on, and instead, he and the Republicans are going to kind of go item by item, make individual tax cuts here and there, threatening countless government-sponsored programs, but one program that could take a significant hit, affecting millions of American citizens, is Social Security. I’m joined now by Alex Lawson, Executive Director of Social Security Works, to explain what exactly is happening, what Trump is proposing to do to Social Security here in the United States. Alex, thanks for joining me today.

Alex: Thanks for having me.

Farron: So the news has been coming out this week, the AP first reported it, that Donald Trump and his administration, they’ve got this plan, this proposal they’re developing. We don’t know everything, but essentially what they want to do is get rid of, or significantly reduce, payroll taxes here in the United States. How does that affect Social Security?

Alex: So let me start by saying that this is a really traditional trial balloon. We’ve seen this only in reports from the AP, and they’ve been very vague, and they’ve actually changed as we, in the Social Security movement and the progressive movement, have pushed back on it. What was initially reported was just that they were thinking of doing away with the dedicated payroll deduction that funds Social Security, and they said that, ‘Don’t worry,’ we would find other revenue sources for Social Security, but this is just a literal raiding of Social Security. Now, I know you and everyone who watches your show knows this, that no one gives anyone anything with Social Security, right? It’s our money. We pay into the system out of every paycheck.

We see our money going into the system, and then our money is there for us in the form of benefits. 99 cents of every dollar that we pay in comes back to us in the form of benefits, and the Trump administration is straight up, straightforwardly proposing to steal this money and use it for something else. That’s the nuts and bolts of the proposal, is just to raid Social Security and steal our money.

Farron: … something that we’re all paying into with taxes, separate from the budget, separate, basically, from everything else, so that it can’t be touched. That’s why it was designed this way, so that it didn’t rise and fall with budget shortfalls and things of that nature. This was independently funded, so if we cut off the funding from the payroll tax, does money from anywhere else, is there any money to go into this program?

Alex: What happens is, it would become, it’s exactly what you just said. I mean, FDR set it up this way, and Francis Perkins, and the Brain Trust of the New Deal, so that politicians could not get their little hands on our Social Security money. What the Trump proposal is, is to get rid of that protection and push Social Security into the budget so that every year … And remember, the government has shut down over the budget process. The budget, right now, is, they’re going to completely zero out Meals on Wheels so that they can buy one tire on one new aircraft that the armed forces does not even want. That’s the budget showdown that’s happening right now in the Trump administration, so the same administration is saying, ‘Oh, just put Social Security into the middle of that, and make it compete, and make all the other programs compete with it.’

And that would be what would bring down Social Security, is that year, after year, after year, it would have to go through what’s called the appropriations process and the budget process. And you remember, for many years, there was no budget passed, because the Republicans were dead set on just burning the entire government to the ground, zeroing out programs that helped the people so that they could pass handouts to give to greedy liars on Wall Street. That’s exactly what Trump and his budget guy, Mulvaney, want to happen with Social Security, so you can’t separate the proposal to raid Social Security, throw it into the mix with the general budget, with what they’re actually doing right now in the general budget with people like Mick Mulvaney today. Literally today, a day after the trial balloon, he’s talking about trying to cut Social Security in the budget process that Social Security is not even a part of.

I know that’s complicated, but it really shows you exactly where they are. They want to cut it so bad that Mick Mulvaney is saying, in an interview, that he is trying to figure out ways to actually cut Social Security in the current budget process.

Farron: We know Donald Trump himself, during the campaign, he said there would not be any cuts to Social Security. Now, most of us who kind of understand what Donald Trump was all about really didn’t take him for his word on anything he said during that campaign, but here we have, just like so many other instances, Donald Trump says one thing during the campaign in an effort to hoodwink the public to get them to vote for him, and now he’s literally working against his own talking points by trying to defund Social Security, send it into general budget issues, which we know Republicans, every opportunity they get, any program that helps not the 1%, is immediately on the chopping block. Medicare, Medicaid, Food Stamps, SNAP, after school programs, as you pointed out, Meals on Wheels.

Anything that helps people that aren’t in the top 1% will eventually be cut when Republicans have the authority, ability, and the numbers to do so, and that’s what they’re wanting to do to Social Security. They’re already planning to switch it, if they can, and so Republicans are already planning on cutting it if it gets switched. I mean, they are working 10 steps ahead of themselves on this issue, because they want that money for, I guess, I don’t know, maybe we got to get ready for the war in Syria, maybe we got to get ready for the war in North Korea. So much has happened in the last week in terms of what new wars Trump is going to try to start on Twitter that it’s almost impossible to keep up with, but to me, that’s what it kind of seems like is happening here. Republicans want to get it into the general population of programs for the needy so that they can go ahead and just start chopping it up piece by piece, cut money here, cut money there, and give it back to the wealthy or to the defense industry.

Alex: I don’t think the defense industry, because they obviously are going to want a cut budget to pay for more war. That’s what they do, but Mick Mulvaney and Sam Johnson and the ideologues who are really driving this process forward on Social Security specifically, they see no further than the destruction of the program. That is their only goal, because if they destroy the program, the money that is in the program, people would have no alternative but to put it into Wall Street, and that is the goal of all of these ideologues. I don’t think Trump actually has a position on anything, right? I mean, I think we’ve seen that time and time again, that he has zero moral fiber to say, ‘I believe in this, because this is what’s right.’ It’s just whatever he sees on Fox & Friends in the morning, so I do think that you have to much more closely watch Mick Mulvaney, his OMB Director, and Tom Price, his guy at HHS, and obviously, Mitch McConnell is the real kind of … He’s the guy behind the guy in a lot of this, and he’s been after Social Security for decades.