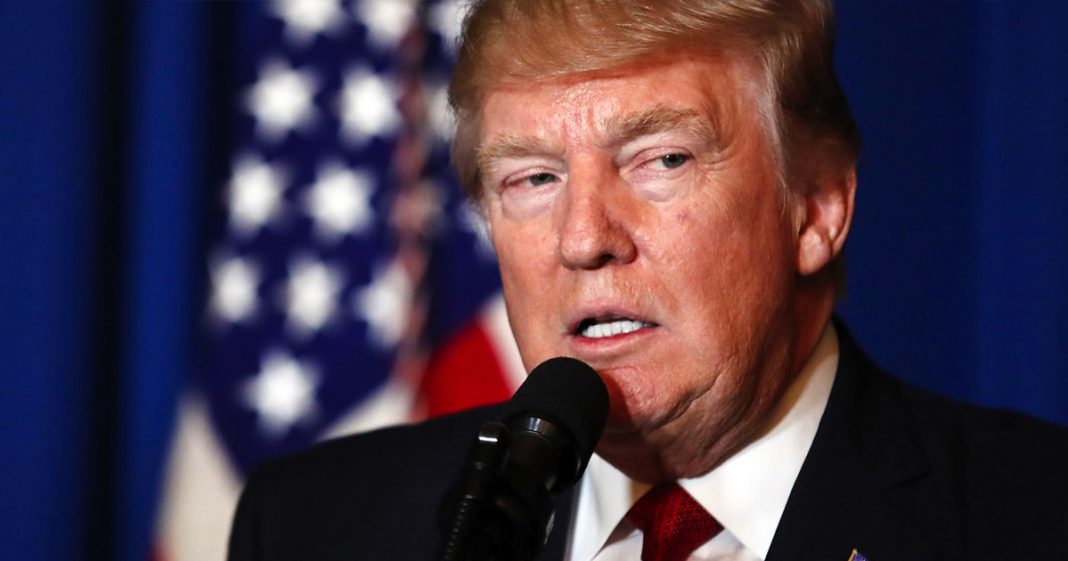 Immediately following Donald Trump’s missile strike in Syria, the media, political analysts, pundits, they began telling us that Trump was so moved by those images that he saw on TV of the chemical attack in Syria that he just decided that he had to act. Well, this is a lie. Donald Trump has not suddenly developed a conscience. Chauncey DeVega, host of the Chauncey DeVega Show and Politics Staff Writer for salon.com, joins Ring of Fire’s Farron Cousins to explain why we shouldn’t believe that Trump cares about anyone but himself.

Farron: Immediately following Donald Trump’s missile strike in Syria, the media, political analysts, pundits, they began telling us that Trump was so moved by those images that he saw on TV of the chemical attack in Syria that he just decided that he had to act. Well, this is a lie. Donald Trump has not suddenly developed a conscience and I’m joined now by Chauncey DeVega, host of the Chauncey DeVega Show and Politics Staff Writer for salon.com to tell us why we shouldn’t believe that Trump cares about anyone but himself. Chauncey, thank you for joining me today.

Chauncey: Always a pleasure. Thanks for having me.

Farron: This is really interesting. There’s so many different angles on this Syria missile strike. It’s nearly impossible to cover all of them, but one of the big ones, the first ones that came out, was that Trump was moved by the images of these children who had died in the chemical attack that he decided the best way to respond to this was to send 59 tomahawk missiles to an airfield in Syria. I don’t understand that logic one bit. Of course, obviously, it’s not true. I don’t believe he was moved, but we’re supposed to believe that the image of dead children made Donald Trump want to, I guess, go kill more people. Is that what happened?

Chauncey: Of course not. Again, this is just another example of the mainstream, so called liberal corporate news media not doing their job in a desperate effort to be possessed by war fever and to normalize this fiend, Donald Trump. Ivanka, I guess as his daughter, the narrative now is that his daughter is some version of the horse whisperer and got in his ear and told him that he has to do something while he’s sitting there with the Chinese Premier eating horrible food at his overpriced resort and giving an order to launch these missiles. Interestingly enough Donald Trump actually owns stock in Raytheon, the company that makes these tomahawk cruise missiles, so that’s something to certainly be considered in terms of his calculus.

This is simply one more example, one more effort of Donald Trump and his Cabal, Steve Bannon, Miller, Anton, and others, and Gorka, of course, trying to get the Russia story off of the front pages of the newspapers. Again, just doing anything that he can. Again, going back to the idea of having a splendid little war because that’s wonderful bait for the news media and it’s also wonderful bait for the American people because we are seeing a temporary bump in the poles from Donald Trump attacking, basically, an empty and abandoned airfield after telling the Russians that the attack was going to come. They told the Syrians who basically evacuated and only left obsolete and damaged aircraft. Of course, again, interesting coincidence, not even hitting any of the airfield to the runway.

Farron: Yeah, and Donald Trump had told us, he said this in an interview on Fox Business, ‘Every missile hit its target, which was remarkable, never happened before. Best missile strike ever.’ That’s what he said on Fox News. Everything hit its target. He omitted the fact that literally within hours of these 59 missile strikes, they were back up and running with this airfield. Possibly one of the biggest, I don’t want to say blunders in military history, obviously we’ve seen a lot of those from George W. Bush, but this was the biggest nothing that we’ve seen from the US Military. There was nothing. All he did was boost Raytheon stock through the roof and boost his own stock within the media who now, they’re calling him presidential. Now he looks presidential.

Is that what it takes to look presidential? You just have to go kill people because people died. We know at least four children were killed from this missile attack according to the reports, four kids. The same ones that allegedly moved him to do this and that’s presidential? I guess by definition, yeah, when you look back at the other presidents who’ve caused these disastrous wars, sure. I guess he fits right in there with Bush or Bush Senior, or Reagan, or anyone of that caliber, but this was not presidential. The media’s behavior since this strike has been absolutely disgusting in my opinion.

Chauncey: Again, a fifth grader using Google could come up with his information, take him 30 seconds. They also not holding him accountable for his previous statements. Well this is the same Donald Trump who literally said he would tell Syrian children to their face that they couldn’t come to America and that they would have to go back as refugees and die. He said this. His son, what did he say? Described Syrian refugees as Skittles candy and I don’t understand how this metaphor works, but somehow some of them are poison, so you can’t eat any of the candy. Again, this is nothing to do with human empathy or sympathy. Also notice that Trump and his administration have no follow up plan for what to do in Syria afterwards. This is rank amateurism, but again, as we saw with the raid with the Navy SEALs in Yemen, this is serious business, this risking people’s lives. It’s also resulting in people being killed. Again, the mainstream media, again, as they have been since day one with Donald Trump, are asleep at the wheel.

Farron: Absolutely. What’s even worse is that he’s gotten so much praise from the media including those who were, I guess, formerly his critics that four days after the missile strike, he decides to start sending warships over to North Korea. He tells us on Twitter he’s building an armada, says that he had a good phone call with China the night before, and we’re ready to act on this menace of North Korea. He saw what one strike did for his numbers, did for his coverage in the media, and now he’s planning on going after an even more dangerous target that, as far as we know, has some level of nuclear capability. We don’t, I guess, have full reports on what that level is, but North Korea isn’t necessarily someone you need to go poking. They’re dangerous, yes. They do horrible things to their own people, but one idiot on Twitter is certainly not the solution to this, but that’s how Donald Trump is approaching it at this moment.

Chauncey: In my Salon piece on this, I also point out this serious, serious, serious concern that this administration, because of their hostility to the very idea of government, their hostility to the common good, their hostility to the commons, Bannon himself saying, quoting Lenin, that basically he wants to destroy the state, create chaos so they can impose their own will. You have basic parts of the government, especially the State Department, that have not been staffed. You have career professionals who have quit because they will not work with Donald Trump. Donald Trump is dispatching, almost like a commissars under Stalin’s Russian, political folks to monitor people who are the bureaucrats to make sure that Trump’s message is adhered to.

The head of the State Department is a man who didn’t want the job and his wife as a Christian fundamentalist and a “prayer warrior” told him that God wanted him to take the job. Basically he’s there as basically a stand in for the plutocrats and for Exxon to loot the world. He’s an incompetent himself who apparently gets really, really tired. He was in South Korea and he said he had to leave because he was sleepy. I mean, so much for the myth of these great CEOs as captains of industry, but you have level upon level of incompetence and I’m really worried, and others are, in terms of the types of signals that you send to your adversaries, to your allies.

The signals Trump is sending, and also not sending, again, this whole idea of a black box where Trump says, ‘Well, I don’t want my enemies to know what I’m going to do.’ Well, adults at the table in international relations, you send signals to each other. That’s how you prevent war. You don’t want to have to guess about a peer or adversary’s intentions. That’s how you have a war. Trump seems to be playing a game because, again, this is all about political calculus, about distracting people from their horrible regime.

Farron: As you point out in your Salon piece, his entire presidency, this attack on Syria, and everything else we’ve seen is a performance of the worst aspects of our common humanity. I think that is an absolutely brilliant way to really describe what we’ve seen. Again, it’s been 12 weeks, I believe, 12 weeks since this man was sworn in as President of the United States and we have seen the worst of the worst. I’m afraid that we haven’t seen the worst of what they’re capable of just yet. What do you think about that?

Chauncey: It’s interestingly enough. I just spoke to a historian who studies fascism and authoritarianism. He’s at Yale University. He has a great book out. His last name is Snider. Everybody should go pick up this book. He basically comes up with 20 ways that individuals can resist this moment. Literally, he and I were just one the phone about five minutes ago. He and I were chatting about what comes next. He made a very, very, I think, incisive and disturbing observation. Going back to Trump and his fascination with the military, his political calculi, his finality, that he thinks that Trump will have his own version of The Reichstag fire.

Going back to World War II and Hitler’s rise, where they staged an event to then use that to create a state of emergency. The question then becomes when Trump does this, be it through militarism, attacking another country, God forbid something happens in this country with terrorism, will we be able to resist? Will that be the point of no return? His insight’s, rather, are that if we get something done within a year, we can resist, but if the people don’t stand up in every way possible in their day to day life through votings, elections, where they donate money, through actually our interactions with each other in terms of our common humanity, we may be too late. I’m in agreement. Something bad is going to happen. I know that’s vague. Trump is going to use it to declare a state of emergency.

Chauncey: I think that’s the next step.