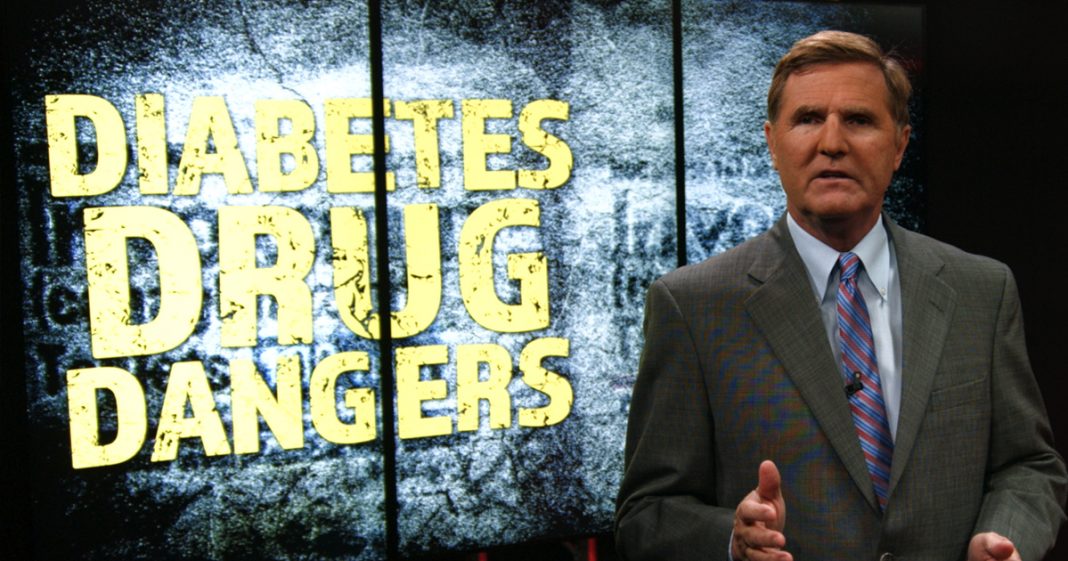 According to the latest data from the Centers for Disease Control, more than 29 million Americans suffer from diabetes, and nearly one in four people with the disease aren’t even aware that they have it. With so many people suffering from both type 1 and type 2 diabetes. Big Pharma saw an opportunity to make a huge profit. America’s Lawyer Mike Papantonio discusses Invokana, a diabetes drug that’s causing as much harm, if not more than the actual disease that it was supposed to treat.

According to the latest data from the Centers for Disease Control, more than 29 million Americans suffer from diabetes, and nearly one in four people with the disease aren’t even aware that they have it. Even worse, as many as 86 million Americans currently suffer from pre-diabetes, and if preemptive measures aren’t taking, they’re going to be diagnosed with full blown diabetes, probably in a matter of years. With so many people suffering from both type 1 and type 2 diabetes, Big Pharma saw an opportunity to make a huge profit. But in their rush to cash in on diabetes epidemics, they cut corners and they created one product that’s causing as much harm, if not more than the actual disease that it was supposed to treat.

That product is called Invokana. Invokana was developed by Janssen, an offshoot of Johnson & Johnson. Unlike other diabetes medications that are designed to help the body produce more insulin to metabolize sugar, Invokana actually forces the body to filter sugar out of the blood by the kidneys and this sugar’s expelled as a waste. Sounds like an easy process, but it’s potentially catastrophic in some situations. As a result of this, the body loses the carbohydrates that it needs to function, the kidneys become overworked and can eventually shutdown, and the body goes into a form of survivor mode where it begins to break down muscle tissue and stored fat, it begins to break that down to compensate for that loss of sugar.

This condition is called “diabetic ketoacidosis” and it’s deadly. Diabetic ketoacidosis occurs when the body begins to break itself down in search of energy, and it creates a dangerously high level of acid in the bloodstream. This condition is extremely painful and the patient can end up losing control over their bodily functions completely. Their kidneys can shut down completely, and they can die. On May 15th, 2015, the FDA warned consumers about the increased risk of ketoacidosis from Invokana, so Janssen was put on notice that their medication was extremely dangerous for consumers. But this wasn’t the first time that they FDA had expressed concerns over Invokana.

The drug was approved in 2013, and it was only approved by the FDA by a margin of one vote. That’s how close it was. Members of the approval committee were concerned about the safety of the drug, but they voted eight to seven to put it on the market, as we usually see with the FDA. Always making decisions that favor the drug companies. But Janssen wasn’t about to let their cash cow go away. After all, the drug was pulling in more than one billion dollars a year for the company, so they tried to use ketoacidosis in their favor. They tried to make it into a positive. They actually went around telling doctors that patients might even lose weight if they take this drug. That’s how sick of a marketing campaign they had running on this drug.

Of course, they didn’t bother to tell the doctors that the weight loss was due to the fact that the patient’s body would begin to metabolize itself in a horrendous way. But all Janssen saw were profits, and those dollar signs always trump warning signs. If you know of a family member, or if you’re taking this drug, you really need to go talk to your doctor about some alternatives. There are many alternatives out there that are as good or better as Invokana that don’t cause these types of physical problems.