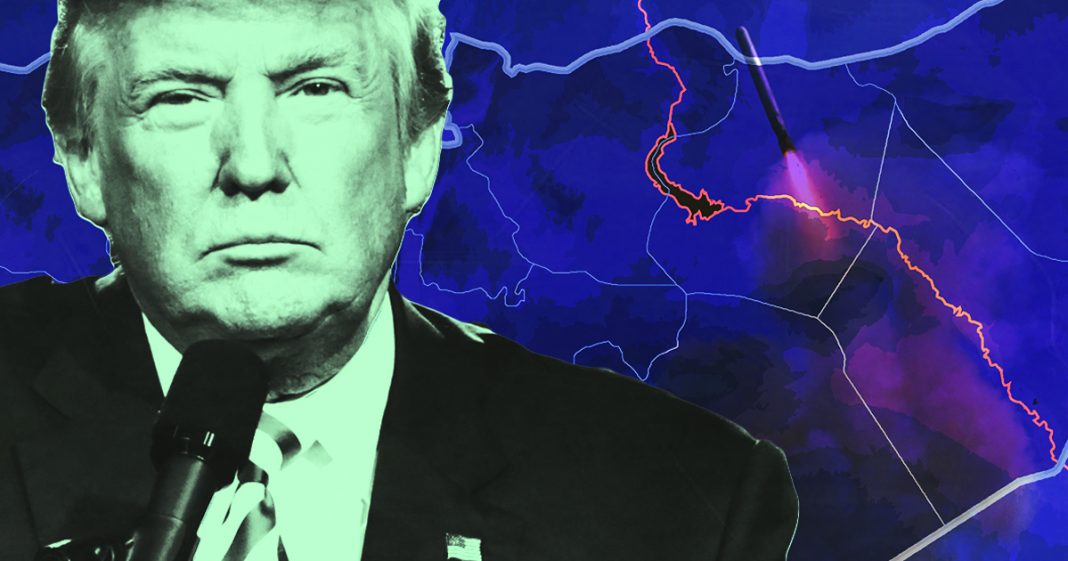 Last week, Donald Trump decided to lob 59 Tomahawk missiles at an airfield in Syria, and almost immediately, the corporate-controlled media began talking about how presidential Donald Trump looks now. You can almost see them salivating at the thought of a new war to promote. Ring of Fire’s Farron Cousins is joined by Matt Gertz, a Senior Fellow at Media Matters for America, to discuss the corporate media’s eagerness to promote a new war in Syria.

Trump Just Attacked Syria. Here Are The Pundits Who Said He Was A Dove. by Matt Gertz

Farron: Last week, Donald Trump decided to lob 59 Tomahawk missiles at an airfield in Syria, and almost immediately, the corporate-controlled media began talking about how presidential Donald Trump looks now. You can almost see them salivating at the thought of a new war to promote. Joining me now to discuss the corporate media’s eagerness to promote a new war in Syria is Matt Gertz, a Senior Fellow at Media Matters for America.

Matt, thanks for being with us today.

Matthew: Thanks for having me.

Farron: I think what’s really interesting about the media’s immediate response to the strikes in Syria were the people saying that, ‘Now, now, he looks presidential.’ Suddenly, by launching almost 60 missiles at a foreign country, that is what passes for presidential in the eyes of the corporate media. This is getting to a point of absolute absurdity when all you have to do, in the media’s eyes, to look presidential is shoot some missiles off.

Matthew: Yeah, I think you’ve hit it squarely on the head. This is something that we’ve seen happen literally for decades. There is a sense, from some in the media, that you’re really the President, you haven’t really demonstrated your medal, so to speak, until you deploy US forces into battle somewhere. They don’t really care where it is. They don’t really care how well it goes. We saw this in Grenada and Panama, getting back decades. This is when the media decides, or at least for some in the media, this is what makes you a President: your first decision to kill people, more or less.

Matthew: With someone like Donald Trump, I think this is more frightening than it would be in normal circumstances because Trump is someone that we know spends a lot of time watching cable news. We know that he’s someone who has very, very thin skin regarding how he’s portrayed by the media. Basically, what you’re doing here is, the press is giving the President a lot of plaudits, and the President is going to learn that this is what it takes. Military strikes are what it takes to win the media’s approval. I think that that’s going to put us in a situation where he’s going to do more of it.

Farron: I think what’s really interesting about that is that the media doesn’t even understand how much they’re feeding into his ego right now because I believe it was the Monday after the strikes, we saw he made this decision, he’s going to send warships over to North Korea. Tuesday morning, he’s tweeting out, ‘If China’s not gonna help with North Korea, then, fine. We’re gonna go, and we’re gonna do it ourselves. USA.’

He saw the media’s response to this, how much they lavished him with this praise, saying he’s presidential, he’s responsible, he did the right thing. Now, this egomaniac says, ‘Okay. Well, look. I’m gonna go do it again, but this time, I’m gonna do it in a much more dangerous country, and I’m still gonna keep the heat over here on Syria, and let’s see how the media plays into this.’

Matthew: I think the level of danger … I don’t think you can underestimate how much this is going to get ratcheted up going forward. We had this very, for all intents and purposes, small strike in Syria. It’s 59 Tomahawk missiles. It knocked the airfield out of being able to function for a few hours, and then they were, later the same day, they were back and sending planes back out, again, presumably to kill more people.

It wasn’t exactly an effective strike, but what it did was it moved us down that path because at some point, the pressure’s going to rise. Trump has said that chemical weapons being used against Syrian civilians was a catastrophe and one that can’t be allowed to happen again. Okay. We take him at his word. Then, what is he going to do to actually prevent that from happening? This strike didn’t actually accomplish much. The question becomes: what’s next? Will there be more strikes? How much do we care about whether Russian forces are in the way of those strikes? We are dipping our toes into some very dangerous water right now.

Farron: What’s interesting is that we’re not seeing the press fully cover all of the information that is coming out about these strikes in Syria. For one, the fact that Donald Trump owns the stock in Raytheon who makes the Tomahawk missiles. We had Eric Trump tell the Telegraph that it was Ivanka, a heartbroken Ivanka, who convinced the President to launch these missile attacks. We have the allegations that he warned the Russians ahead of time that he was going to attack in this specific manner.

There’s lots of little pieces here that start to make this look a lot less presidential and almost, I guess you’d call it, scandalous. I mean for me, if Ivanka Trump, this unelected, unpaid person who I guess has an office in the White House, has the kind of sway to go up and say, ‘Daddy, I didn’t like what I saw on TV. Please bomb them.’ That should be a major story. She should not have that kind of sway over the President.

If what Eric Trump has said about his sister is true, then we’re looking at a very real problem because God only knows where she could ask him to strike next. She claims to be brokenhearted about the children in Syria, ignoring the fact that her father is trying to cut after school program budgets here in America, destroy the environment, effectively poisoning our own children here in the United States with corporate pollution. Why those children in Syria, and why not these children here in the United States? I don’t buy that for one second.

Matthew: You mentioned that if what he said is true, right? I mean I think that’s sort of the problem that we have covering this Administration in general. They lie constantly. They lie without any particular purpose. They lie on little things. They lie on big things. You can’t really trust anything you hear about why their decisions are being made. That makes all of this much more fraught and difficult.

There was a New York Times story the other day that basically said that Trump had led with his heart and that that was what had happened. The way Eric Boehlert put it on MSNBC the other day is that it was almost like they were portraying him as the Grinch. His heart grew three sizes that day, and suddenly, he decided that we needed to bomb Syria.

That’s a level of mind reading that is very flattering to the President, but not one for which the media is generally able to actually provide evidence. They don’t know what he … to 100% confidence of what he was thinking at any one time and so portraying the story in that way is going to confuse and mislead the audience as a whole.

This is on an issue, the idea of whether Trump is a hawk or Trump is a dove, that the press has been very bad at for the last couple of years. Trump, at sometimes, tried to portray himself as someone who was more sober and non-interventionist on foreign policy issues. The press repeatedly would buy that. There was a sort of contention during the election that Trump was a reluctant warrior, that he was, in fact, running against Hillary Clinton from the Left on issues of foreign policy. That never made sense. It certainly doesn’t make sense now.