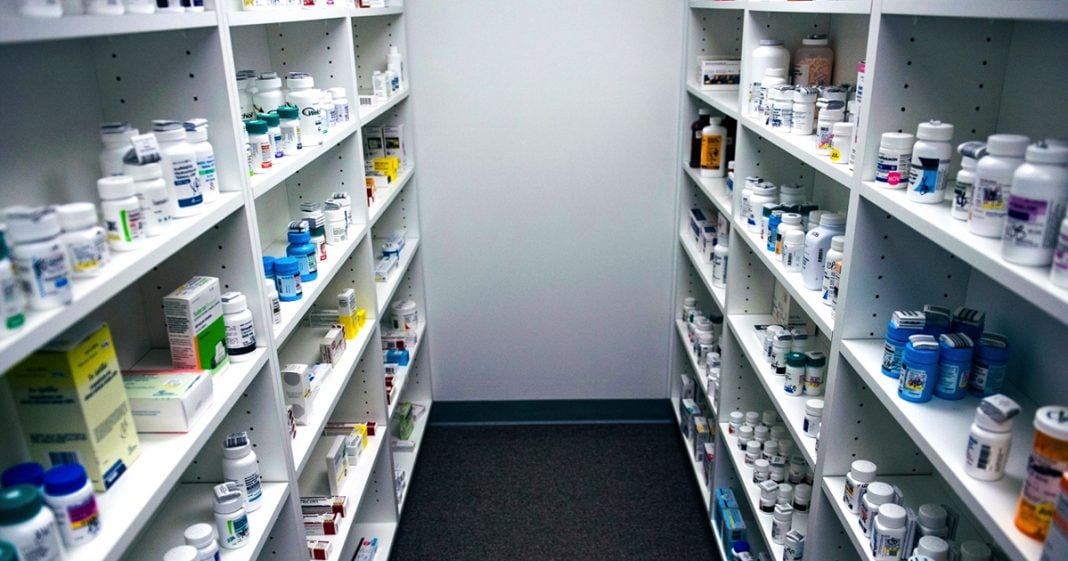 Democrats in Washington, at least some of them, have been attempting to pass legislation that would help lower the cost of prescription drugs for American citizens, which is actually something that Donald Trump himself had promised us when he was running for president. But big pharma won’t let their profits dip without putting up a fight. Lee Fang from The Intercept joins Ring of Fire’s Farron Cousins to talk about what the industry is doing to prevent any legislation that could reduce the cost of prescription drugs for American consumers.

Farron: Democrats in Washington, at least some of them, have been attempting to pass legislation that would help lower the cost of prescription drugs for American citizens, which is actually something that Donald Trump himself had promised us when he was running for president. But big pharma won’t let their profits dip without putting up a fight. I’m joined now by Lee Fang from The Intercept to tell us what the industry is doing to prevent any legislation that could reduce the cost of prescription drugs for American consumers. Lee, thanks for joining me today.

Lee Fang: Hey. Thanks for having me. It should come as no surprise that the drug industry is revving up its lobbying muscle to block any proposal from the Trump administration or from democrats on capital hill to reduce drug prices in America. There are a lot of proposals out there, and so the drug industry kind of working collaboratively, you know, many of the big drug company whether you’re talking Johnson and Johnson or Pfizer, Bristol-Myers Squibb, they are working together pooling their resources into a trade association known as PhRMA, the Pharmaceutical Research and Manufactures Association and they’re kind of moving very quickly to stomp out all of this kind of activism and legislative proposals to curb added control of drug prices in America.

Just to give you an example, Senator Al Franken of Minnesota along with a number of other democrats introduced a big proposal last month to address high drug prices in America and there are many provisions of the bill. One of the provisions is to allow Medicare to negotiate using collective bargaining power just as the veterans administration does to negotiate for lower drug prices. Another provision in the bill allows the re-importation of FDA-approved drugs from places like Canada. A lot of provisions that the drug industry does not like and they’ve hired a number of lobbyists. They’re funding a number of advocacy groups that are all kind of attacking this Senator Franken proposal.

Farron: It’s worth pointing out that right now I believe the VA is the only entity, really, in the United States that is allowed to negotiate drug prices. No other government programs can do that. They attempted, I believe, to get that Medicare drug price negotiation into the original draft of the Affordable Care Act. Unfortunately, republicans got a hold of that along with some big pharma lobbyists, manage to strip that from the final piece of legislation, which that would have been a massive, massive break for American consumers. Again, I think we gotta give Martin Shkreli a little bit of credit on this issue, because had it not been for his greed helping to bring the outstanding cost of drugs in the United States to the public’s attention, we probably wouldn’t be having these conversations today.

You had Shkreli with his price gouging then we had the EpiPen and then we had several other stories. Those really brought this issue to the public’s attention because before that, yes, we were paying these astronomical prices, but there wasn’t necessarily very much coverage of it. Now that people understand what’s happening, we understand we’re paying sometimes upwards of 20,000% markup whereas other countries may pay up to 2,000 to 5,000% markup, still a huge markup, but a lot less than 20,000. People are angry. We’ve heard that at the town halls and that’s why democrats finally decided after the public outrage to get up and do something about this.

To their credit, most of them are working on this, but, again, as you pointed out on The Intercept here, we have so much money from big pharma that they spend on lobbying every single year and now they’re doing it basically through these other conservative groups to fight this legislation with this ad campaign that they’ve got running. Tell us about that ad campaign that’s going here.

Lee Fang: Yeah. We talk about big pharma spending so much money, hiring so many lobbyist, providing so much in campaign contributions, but a lot of the money goes on without any public view. I can give you a number of examples of that. The latest one, the one I just wrote about is that if you’ll open up Politico or the Washington Post, Washington Times, really any Washington DC area newspaper, any time over the last two or three weeks after the Al Franken bill dropped, you’ll see full page advertisements from seemingly independent groups. Organizations like the American Conservative Union, Americans for Tax Reform, a number of other organization. These full page ads have pictures of worried seniors saying, ‘Oh, government bureaucrats are gonna come after your Medicare. They’re gonna ration your choices. They’re gonna do all these dangerous policy experiments that could threaten your medical care.’

What they’re referring to is Senator Franken’s bill to reduce drug prices. What the ads don’t tell you is that bureaucrats are already involved in Medicare. It’s a government program. It’s a ridiculous argument. The bottom line is that these organizations that are warning you about these drug price reduction proposals are funded by big pharma. They don’t say it in the ads and they don’t say it on their website, but we’ve seen historically through tax returns that were made public that hundreds of thousands of dollars from the big drug companies have been pumped into these organizations, and they have a long history of taking corporate money and then advocating or lobbying on behalf of their corporate donors. Some of it just kind of boggles my mind.

Americans for Tax Reform is that famous group founded by Grover Norquist, the anti-tax lobbyist. Here he is sponsoring an advertisement on Medicare drug prices. This has nothing to do with taxes. If anything, if we allowed Medicare to negotiate for lower prices, that would reduce the amounts that taxpayers have to spend. So he’s arguing, actually, for proposals that waste more tax dollars but he’s doing so kind of covertly to help his drug company sponsor. So I think that’s the issue here. Just back to your earlier point about Martin Shkreli, because that was a very clarifying, I think, flashpoint because what Martin Shkreli did was basically, he didn’t do any innovation. He didn’t do any research. He didn’t come up with a new idea.

He simply bought the patent and jacked up the price and did so overnight. So that elicited a lot of big headlines. The dirty secret of big pharma is that a lot of the big companies do the exact same thing, they just increase prices incrementally. They buy a smaller drug firm with medical technology developed in partnership with the government, NIH is still the biggest funder of medical research in the country. They buy up the patent and then they increase the drug prices by 10%, 20% on a monthly or yearly basis. So the actual behavior is identical to Shkreli, they just don’t it in such a hand handed way to attract public attention.

But if you look at the financial filings of pretty much all of the big pharma companies, these companies are spending much more on advertising, on lobbying, on merges and acquisitions than they actually spend on research and development. All the big pharmas, essentially, pharma companies essentially act as Martin Shkreli does, they just do so in a much more sophisticated way so they don’t attract the same type of negative headlines.

Farron: Exactly. Shkreli saw that these companies, you know, he saw how rich they were getting, how they were doing it and he decided he wanted to get a piece of that action, he just didn’t know it takes a little bit of nuance when you want to rip off American consumers.