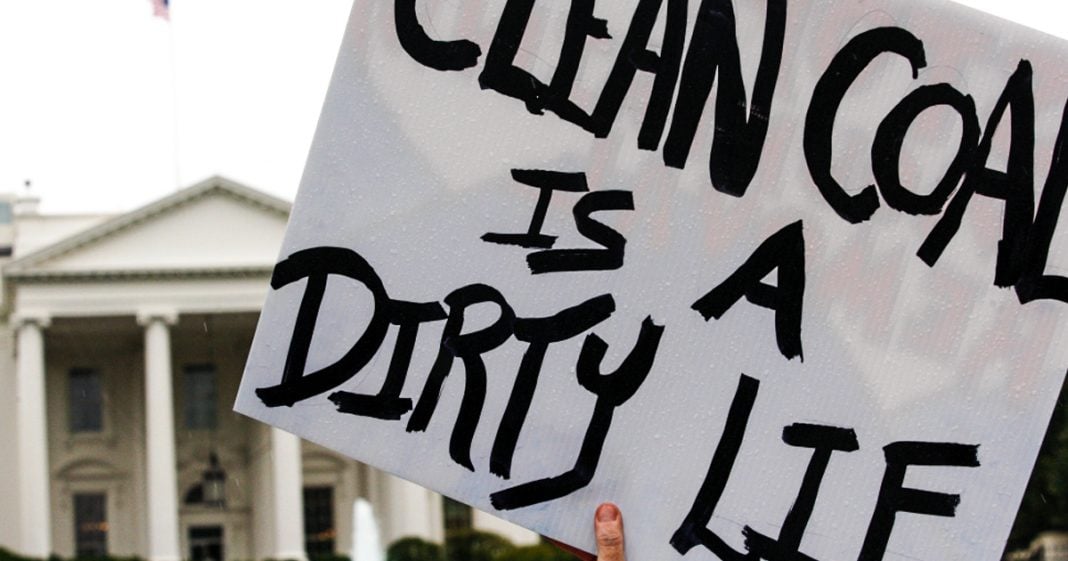 Donald J. Trump has been working overtime (when he’s not on vacation or playing golf) to undo every single environmental protection put in place by President Obama – and once again, Old King Coal is a merry old soul. Right now, in a move that wouldn’t have even been considered six months ago, the pimps at the American Coalition for “Clean Coal” Electricity (ACCCE) are now deep in negotiations with their prostitutes in the governor’s mansion and the legislature of an “unnamed state” over the construction of a new, coal-fired power plant.

This comes at a time when coal-fired plants have been being taken offline and EPA regulations have put a de facto moratorium on the construction of new facilities. Now that the EPA is headed by climate denier Scott Pruitt (who has sued that very agency over environmental regulations no fewer than 14 times), folks at the ACCCE are ready to pop the champagne corks.

The lobbying group’s president and CEO, Paul Bailey, expressed optimism about the coal industry’s new prospects. Nonetheless, that optimism is tempered with caution: “I don’t think any of this is going to happen overnight,” he says. “There are a lot of discussions and steps to go through to build a new coal plant.”

One can only hope. The best chance for that hope may come from the same “free market forces” that Trump and his swamp-dwelling, lowlife disciples of Ayn Rand claim to worship. Currently, natural gas (not a perfect solution, but far better than the alternative – at least for now) is abundant and cheap. Furthermore, renewable energy is experiencing unprecedented growth as the costs associated with that technology continues to drop.

There is also the strong possibility, thanks largely to mad Emperor Trump, that the GOP has finally overreached itself to the point of complete and utter self-destruction. The shutdown of coal-fired plants began even prior to Obama’s greenhouse gas reduction initiatives. Emperor Trump can sign all the executive orders he likes in his ongoing attacks on Planet Earth – but he won’t be in office forever, regardless of what he thinks.

Although not a foregone conclusion by any means, future Administrations could put environmental regulations right back in place – and since coal plants are designed to last at least forty years, that would mean Old King Coal would see huge investments going down the proverbial drain.

Between that prospect, competition from natural gas and renewables, and state and federal incentives for green energy, getting new coal-fired plants off the ground would be a “pretty tough sell,” according to Philip Smyth, senior director at Fitch Ratings. “Utilities are looking for ways to save plants they already have in the ground, never mind building new ones,” Smyth says.

On the other hand, Bailey thinks that the coal industry could get a boost from the same initiatives encouraging the growth of renewable energy. He comments, “Why shouldn’t a high-efficiency coal plant that could some day employ carbon capture get a boost from state policy? It would level the playing field.”

And so it might – if the whole concept of “clean coal” didn’t belong in the same category as Santa Claus and the Easter Bunny. Even if the use of catalytic converters and carbon sequestration could reduce airborne pollutants, coal mining and production has been, and continues to be, disastrous to the environment.

Meanwhile, environmental activist organizations such as the Sierra Club are gearing up for a fight. Bruce Nilles, senior director of the Sierra Club’s Beyond Coal campaign, has three words for Old King Coal: “Bring it on.”