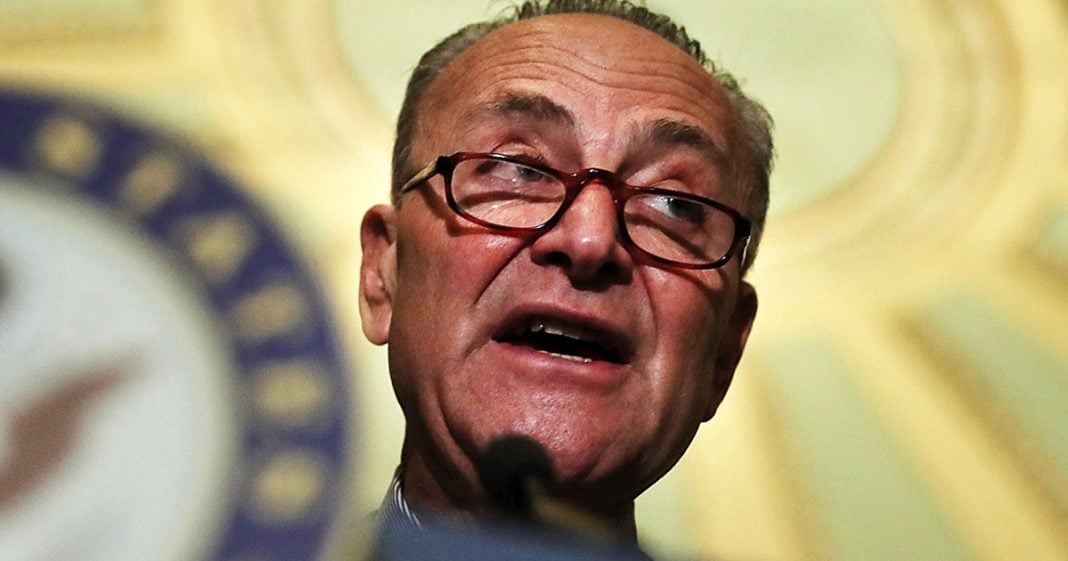 Leaving control of this government in Republican hands for four years is going to be a real problem. Ring of Fire’s Farron Cousins & Sam Seder talks about the Democrats need to start to develop a response that is about the Republicans, and not about Donald Trump exclusively.

Sam: So, Farron, we were just talking about how reporting over the past couple of weeks has given us a sense of what’s coming out of the White House and this administration, and the picture is sort of like one of those funhouse mirror versions of an administration. You have a tremendous amount of paranoia; I’m sure this week didn’t help in that accord. You have that combined with a tremendous amount of disarray. We didn’t even touch upon the idea that Rex Tillerson is refusing to have the press follow him as Secretary of State, that he’s blowing off NATO to go visit Russia, that he’s … We didn’t mention that the president is heading down to Mar-a-Lago every weekend at a huge cost to American taxpayers.

Basically, we just focused on the failure of the Trump administration to hire people in important positions within our government, and instead, just placing sort of cronies in these agencies whose sole purpose is to just report back to the administration whether or not the heads of these organizations are loyal to Donald Trump, which is … You know, I think they have a right to be concerned, frankly, but nevertheless, this is all part of a project to destroy a government. But one of the things that I know that you have been talking about lately — and I agree, and I’ve been talking about this too — is that Democrats can’t just sit back and talk about how incompetent or corrupt or disgusting Donald Trump is.

Farron: You know, I think the Democratic Party in general, you know, those in charge, fall into this trap — they certainly did it in the 2016 campaign — is believing that disgust towards the Republican Party somehow equals support for the Democratic Party, but that’s not the case, and that’s the … I think they’re still falling into that trap here. When we look at the fact that Trump’s approval rating, historic low at 37% this week, majority of the public absolutely despises the GOP health care plan, Congress still has an approval rating that’s only slightly better, I think, than herpes, the Democratic Party right now has so much going for them if they capitalize on it.

I mean, two polls out of the last week have showed that Bernie Sanders — at least his ideas — most popular politician in the United States, and it’s not because he’s Bernie Sanders, it’s because he does talk about the issues, he’s not shying away from that, and he has ideas and plans. And it’s those two things — not necessarily his ideas or plans, but that he has ideas and plans — that I think the Democratic Party needs to learn something from. Don’t just sit there like you did in 2016, when only 25% of Hillary Clinton’s ad talked about issues, the rest were only attacking Donald Trump. You have to go out there, you have to-

Sam: You have to learn from that.

Farron: … start talking to people, you have to lay out a plan, and you have to say why your plan is better. Highlight all the horrible stuff, absolutely, but don’t lose sight of the fact that you have to talk about what you’re going to do and why it’s better. And it’s still not happening, and right now, they have the momentum, with the … The angry people at the town halls despise Republicans. They’re not capitalizing on it, though, and if they don’t, they’re going to miss their window here.

Sam: Well, I will say this. One of the encouraging things that we saw at the Gorsuch hearings this week was, in that first day of hearings … And we saw this throughout, they carried this out, but guys like Senator Sheldon Whitehouse, Al Franken, Leahy — even Dianne Feinstein, who is not this person, chimed in on this — we heard a lot about this dynamic of corporations versus people, and big moneyed interests versus regular people, whether they are workers or parents or consumers, or however … Whether they’re looking for redress in a court. There was this dynamic that was set up where, regardless of how Gorsuch came off, the argument was, ‘Look, you know, John Roberts said he would just call balls and strikes, but we’ve had all of these pro-corporate rulings, and you were handed to us, to Donald Trump, by a pro-corporate interest.’

That’s a good sign to me, but there was also, this week, a report that came out from the Democracy Corps this week, and the Roosevelt Institute, where they did a focus group with 35 white voters in Macomb County, Michigan. Now, let me say two things. One is, obviously, the Democratic Party needs to be the party of people of color, of women, but I don’t think that necessarily means you need to exclude these type of voters from Macomb County in Michigan, because they voted for Barack Obama — at least this district, this county — twice, and then they went for Trump, and there’s a … There’s a problem there. That shouldn’t happen.

Now, we also had a problem with driving African American votes out. Hillary Clinton was not able to drive them out, and I would imagine it’s more or less for the same reason, and that is the Democrats need to offer a bold program of providing things for people. That’s what people want. They want universality, they want things like help with college, they want things like health care. And yes, Republicans have stood in the way, but Donald Trump showed us one thing: that you can say things, and just by saying that you’ll do them, and being aggressive with your promises, people assume that at the very least, you’re addressing their problems.

And the Democrats too often allow a sense of what they think is possible or not possible to get in the way of expressing what they think should be possible, and that’s got to change, Farron. I think we both know it, and hopefully, we’ll start to see that, because otherwise, you know … Leaving control of this government in Republican hands for four years is going to be a real problem. You and I know it; the Democrats have to express that to the rest of the country.