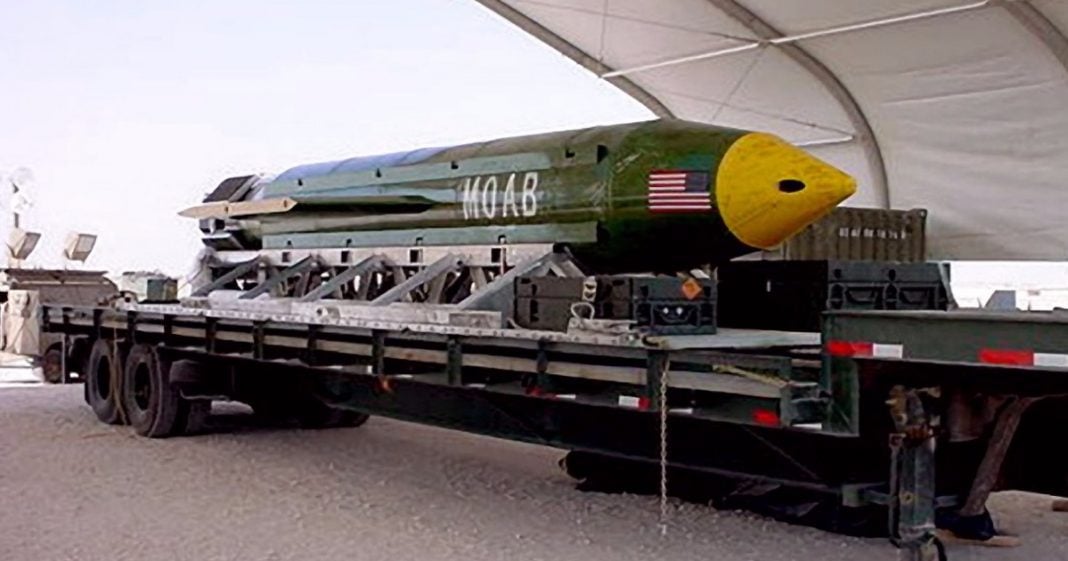 On Friday morning’s “Fox and Friends,” things managed to get more absurd than normal when, during the show’s open, they featured footage of the MOAB bomb dropping on Afghanistan while playing a patriotic Toby Keith song.

Looking more like a scene out of a comedy sketch, as viewers watched the bomb drop, killing dozens, Toby Keith’s voice rang out, promising death and destruction to America’s enemies.

The song, “Courtesy of the Red, White, and Blue,” which was featured in the aftermath of 9/11, was also one of the few musical performances at Trump’s inauguration-eve event. It appears that the doom and gloom of Trump’s presidency is a boost for the country music star’s waning career.

At the conclusion of the bizarre clip, one of the “Fox and Friends” hosts noted that though the video was in black-and-white, “this is what freedom looks like.”

So Fox News aired footage of the MOAB explosion to the tune of Toby Keith's "Courtesy of the Red, White, and Blue" pic.twitter.com/5QTUnYaBLa

Unfortunately for those of us sane enough to see the disgusting war-mongering in this assembly of video, song, and commentary, many Americans agree. Since the missile strike in Syria and the dropping of the MOAB on a series of ISIS-held tunnels and caves, Trump’s approval ratings have been climbing from their historic low. Despite the fact that Trump ran on non-intervention, many pro-war voters are eager to see death and destruction wrought on our enemies, no matter the cost.

Unfortunately, though the dropping of the 22,000 pound bomb appears to have been mostly successful – if reports can be believes, just over 30 members of ISIS were killed and no civilians were killed thanks to the surrounding mountains – there is still much to be concerned about.

Each time that President Trump drops a bomb and witnesses the cheers from even liberal corporate media, he will only be inspired to take further, more extreme action. As long as his approval rating climbs, the President will have no problem thrusting the U.S. further into war in every region.

Folks on Fox and Friends know this, and it’s exactly what they want. Their racist audience wants it to. To these people, there is nothing better than allowing their corporate sponsors to make big money off of war, no matter how many innocent lives it endangers.