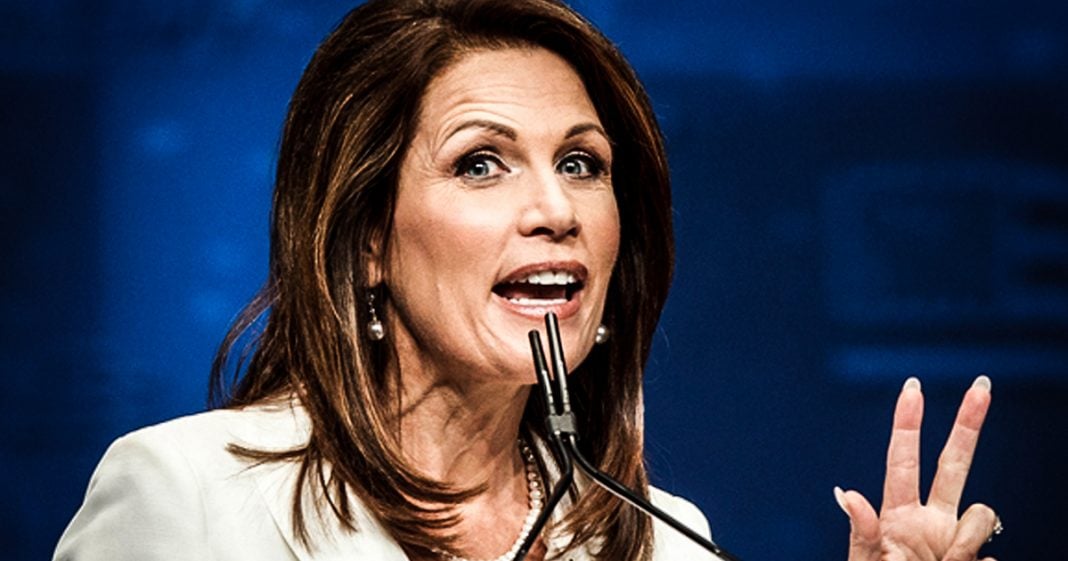 Everyone’s favorite unhinged former congresswoman is back in the news. Last week, former Minnesota congresswoman Michelle Bachman appeared on an End Times Radio program to talk about the fact that liberals are ushering in a new era for the anti-Christ. Effectively, according to Bachman, liberals are letting the anti-Christ come to power. Now, that’s what she said. Now here’s what’s interesting about that. If we’re going to talk about these biblical end-timed things, I think the people who let the anti-Christ come to power are actually the Republicans who voted for Donald Trump.

But, here’s the thing Michelle. You’re telling people that it’s because liberals are pursuing some kind of one-world agenda with no borders. Essentially, everybody living peacefully and commingling. Oh, dear God, that’s terrible, because according to Michelle Bachman, that’s what actually leads to the anti-Christ coming in. One everybody’s getting along and peaceful and happy, then suddenly, bam, anti-Christ. I’m not exactly sure if that’s accurate biblically. I’m not exactly sure if that’s what the bible says, but I do know that that is what Michelle Bachman has said.

Now remember, this is a woman who is actually currently under investigation for misusing over $1 million worth of campaign funds. She allegedly had been taking her campaign money and just spending it on whatever the hell she wanted to, which is incredibly illegal. No, Michelle, don’t sit there and lecture other people about their ethics when you don’t even have any ethics to speak of. Oh, and let’s not forget your husband, who ran a “Pray Away the Gay” conversion-therapy center, that’s also currently under criminal investigation. Do you see where I’m getting here? You see what I’m trying to say?

Michelle Bachman is the typical Republican Christian hypocrite. “I do no wrong. It’s all you people. Everything you do is wrong. You’re ushering in the anti-Christ. Things are gonna be horrible. Also, I have to go testify at my hearing because I did a lot of illegal shit in my time.” That’s Michelle Bachman, that’s Michelle Bachman’s husband, and that’s a hell of a lot of Republicans that we currently have serving in Washington, D.C. Holier than thou in front of the camera, and then doing all sorts of crazy shady things once those cameras stop rolling and nobody’s paying attention. That’s your modern Republican party.