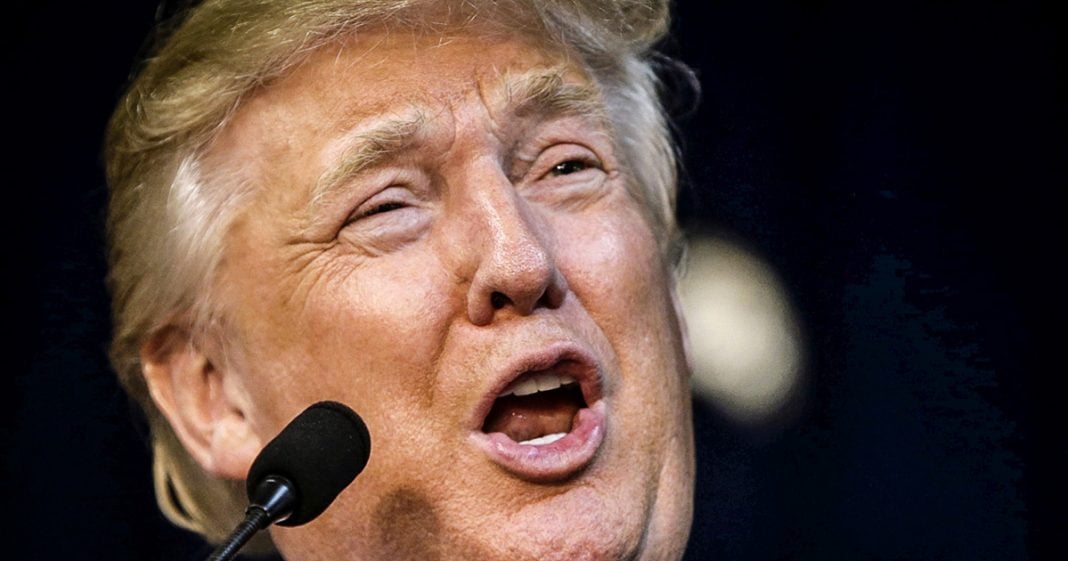 In an interview with The Wall Street Journal, Donald Trump hinted at a plan of his to stop subsidy payments for low-income Americans to purchase health insurance through the Affordable Care Act, at least until Democrats start calling him to negotiate.  He is holding poor people and the aid that they desperately need hostage until the Democrats give in to his demands. Ring of Fire’s Farron Cousins discusses this.

In an interview that was published in the Wall Street Journal this week Donald Trump laid out a pretty disgusting plan to get Democrats to come on board with whatever kind of healthcare reform the Republican Party and Donald Trump try to accomplish. Here is basically what Donald Trump has laid out. First, we actually have to go back to the Obama administration. When Obamacare was set up it allowed the federal governments to make payments to insurance companies on behalf of low income Americans so that these insurance companies would be willing to participate in the insurance pools and allow low income people to buy affordable plans because the government was subsidizing the rest of the money to the insurance companies.

Now Republicans sued Obama to try to end this, it was unsuccessful, but now that Donald Trump’s president, now that he is controlling those particular purse strings, what he’s saying is that … an idea he’s toying around with is maybe we can’t make those payments anymore, at least not until Democrats start calling me to negotiate. Donald Trump is in effect holding the lives of low income Americans hostage so that Democrats will be willing to strip those people of their healthcare insurance. Donald Trump understands that if he does this people aren’t going to blame him, or at least this is what he thinks, they’re not going to blame him. They’re going to blame those nasty little congressional Democrats who didn’t want to negotiate with terrorists, because that’s what Donald Trump is acting like right now.

If you take the lives of low income people in the United States, people who need those government subsidies and you hold that hostage because you want Democrats to play along with whatever disgusting plan you have, that is essentially political terrorism, and that’s what Donald Trump is engaging in or at least proposing at this point. You cannot do that. He is playing politics with the lives of people in this country. Now, we have seen some disgusting things from politicians for decades, centuries really, but this has hit a new low with Donald Trump. Willing to hold subsidies for the needy hostage just so the Democrats will be more susceptible, I guess, to sign on to whatever horrible piece of legislation the Republicans come up with. He’s exploiting the Democratic Party’s fear that the less fortunate won’t be taken care of, and he’s using that to essentially strip more rights away from low income people.

This is a story that unfortunately is not getting very much coverage right now. Nobody’s talking about the fact that Donald Trump literally laid out this plan in the Wall Street Journal, New York magazine has picked it up. But are they going to talk about this on MSNBC or CNN or God forbid Fox? No. They’re not going to tell you about Donald Trump’s disgusting way of doing business. I can promise you, if we went back and looked at some of the business deals that Donald Trump made during his time as a businessman this is his him MO. This is what he does. He says I am going to screw everybody over until I get my way. He is a spoiled bratty child. Unfortunately he happens to be a child that’s more powerful than anyone else in the world right now, and this has to change. We cannot leave this psychopath in charge of the United States. He is playing with the lives of people in this country. Holding them hostage just so he can have at least one legislative accomplishment before somebody comes up with enough evidence to impeach him. That’s what he’s doing now.