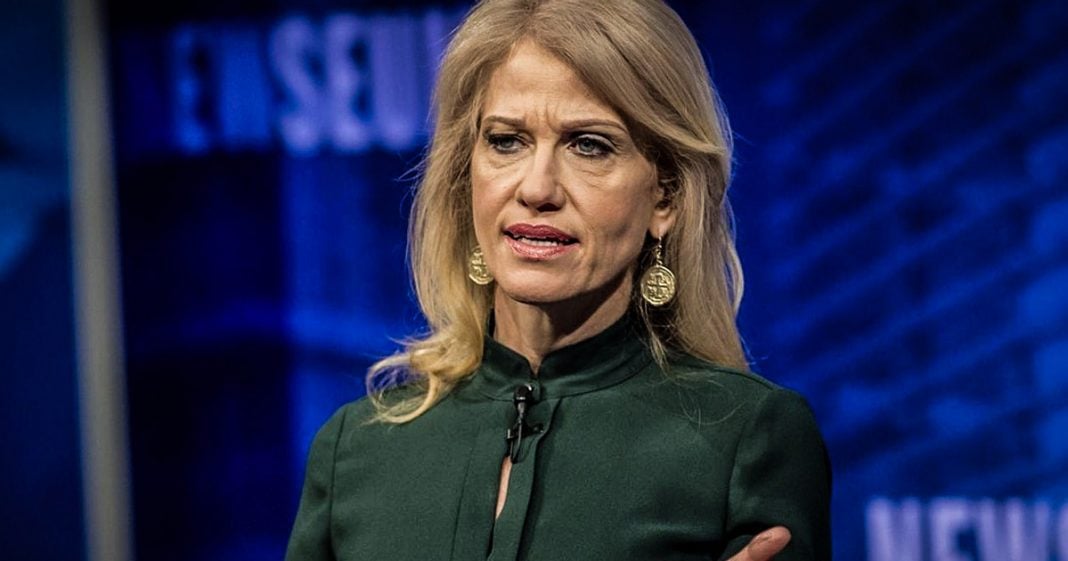 During an interview with Michael Wolff on C-SPAN, Kellyanne Conway became noticeably agitated when Wolff mentioned that Trump doesn’t like New York Times reporter Maggie Haberman, a sentiment that Wolff noted Trump willingly offered up.  Conway went on to distract from Wolff’s original question, and instead used her time to talk about how great Trump is as a businessman, a president, and a human being. Ring of Fire’s Farron Cousins discusses this.

Wolff: I know the president’s views of Maggie Haberman. Yet, why does he speak to her?

Conway: What do you mean his views of her?

Wolff: I mean his views of her is he doesn’t like her. I’ve heard his-

Conway: Why would he say that?

Wolff: Because he’s told me.

Conway: Michael, I just have to push back. That’s just not true. I think it’s inappropriate to say who or who the president does not like, respectfully. You just made my entire point about how he’s covered like he’s a guy sitting next to you on the bus. He’s the president of the United States. He obviously [inaudible 00:00:38] her because he gave her an interview last week.

Wolff: That’s what I’m asking. That would-

Conway: She’s been [crosstalk 00:00:44] journalist he called right after the health care bill.

Wolff: You can’t not follow what she says and not conclude that this is here … Literally, it’s a beat. The aberrant presidency of Donald Trump, New York Times beat. She’s the writer on that beat. I know what the president thinks. I mean, I know what he’s said about her. Yet, he’s reaching out to her. I’m just wondering what … I mean, maybe that’s a good thing. You can say, you reach out to your to people who don’t like you.

Conway: It certainly undercuts the ongoing premise that he’s not giving access to the press or he’s not fair to the press. He does. He gives interviews. I just have to back up because you’ve mentioned somebody by name who I regard as a very hardworking, honest journalist who-

Conway: No, no. She’s very hardworking, honest journalist who happens to be a very good person, a good person, a mom of three who works hard, who seem ubiquitous in print and on TV, and I think, just had a really nice profile written about her. Since you mentioned somebody by name, I felt just a little uncomfortable.

Cousins: What you just say was Kellyanne Conway talking to Michael Wolff on C-Span. Basically, Wolff just wanted to simply if Donald Trump hates the New York Times so much, specifically reporter Maggie Haberman who he has said that he does not like, why in the world would he agree to sit down and do an interview with them. If you come out and say that you hate this organization, that they’re failing, it doesn’t really make much sense for you to sit down and talk to them.

Rather than actually answer the question, Kellyanne Conway took issue with the fact that the interviewer mentioned what Trump himself had said and then tried to somehow say that those things never actually happened. She actually went on there and defended Maggie Haberman which, I got to admit, kind of admirable there. The fact is that Kellyanne Conway and Donald Trump have been absolutely horrible in their treatment of the press, specifically the New York Times and Maggie Haberman. For her to get on TV and tell us anything other than, “Yeah, we hate them,” is an absolute lie.

Then as you watch a little further into that clip, you see Kellyanne Conway once again deflect from the initial question and start talking about that fact that Donald Trump was a great businessman. He was so successful. He was a great New Yorker. He had faith in that city when nobody else did. Those are things that she said during that interview. They had absolutely nothing to do with questions being asked by Wolff. Instead, she’s just sitting there talking about how great and wonderful our dear leader is.

Kellyanne Conway has got to be the most faithful yet clueless member of the Trump administration. It doesn’t matter what this man does, who he attacks, he can always count on Kellyanne Conway to come out front and center and talk about why he’s right or deflect from any controversy by saying how great he is. That’s Kellyanne Conway’s role within this White House. She’s not an advisor. She’s not a spokesperson. She is the diversion. That’s what she does.

“Oh, he bombed Syria?” “Yeah, but remember when he had faith in New York?” That doesn’t make any sense but that’s what she does. That’s why they parade her out in front of the cameras. That’s why they were worried when networks were saying, “We may not have her on anymore.” She’s the person who can take the attention, the focus of the public off of Donald Trump and put it in her. She has no morals. She has no ethics. She has no shame. She’ll go out there and say whatever she needs to say, get the public talking about her, and completely ignoring all of the horrible things that her boss is doing as president of the United States. Kellyanne Conway is Trump’s most loyal servant and probably whenever his administration ends, she’ll probably be the last person standing by his side.