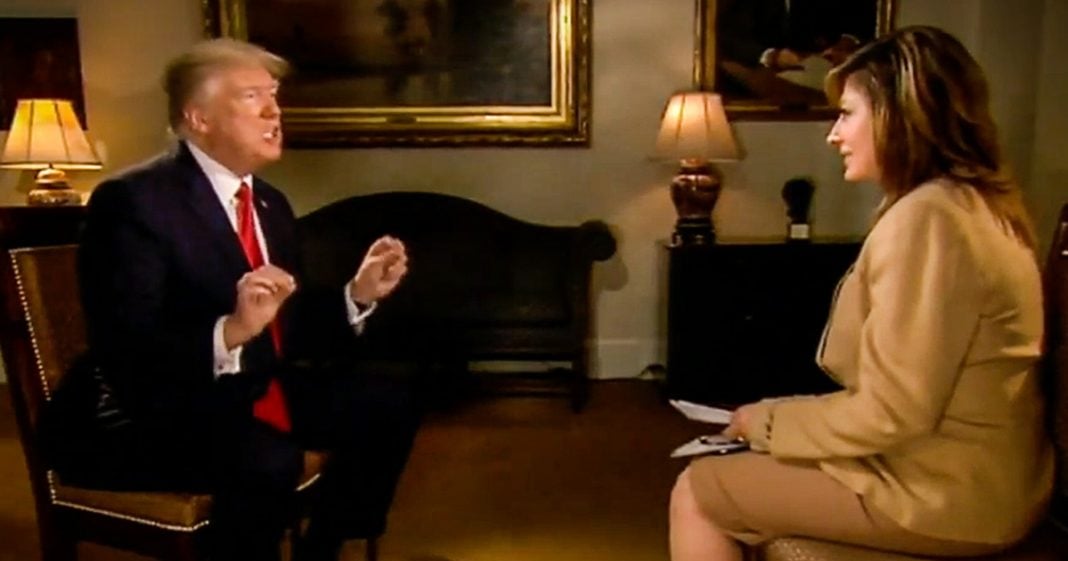 Donald Trump gave an interview to Fox Business Channel where he discussed his missile strikes in Syria.  But during the interview, he spent more time talking about how great the chocolate cake was that he had that evening than the rationale for the strike.  He also just happened to mention that he sent missiles to Iraq, and that’s when the interviewer had to correct him and remind him that he actually bombed Syria. Ring of Fire’s Farron Cousins discusses this.

Cousins: Earlier this week, Donald Trump gave what might actually be one of the weirdest interviews he’s ever given. He sat down with Fox Business Channel’s, Maria Bartiromo, and then this happened.

Donald Trump: I was sitting at the table. We had finished dinner. We’re now having dessert, and we had the most beautiful piece of chocolate cake that you’ve ever seen, and President, she was enjoying it, and I was given the message from the generals that the ships are locked and loaded. What do you do? We made a determination to do it, so the missiles were on the way, and I said, “Mr. President, let me explain something to you.” This is during dessert. “We’ve just fired 59 missiles,” all of which hit, by the way. Unbelievable, from hundreds of miles away, all of which hit, amazing.

Donald Trump: So incredible. It’s brilliant. It’s genius. Our technology, our equipment is better than anybody by a factor of five. What we have in terms of technology, nobody can even come close to competing. We’re going to start getting it because the military’s been cut back and depleted so badly by the past administration and by the war in Iraq, which was another disaster. What happens is I said, “We’ve just launched 59 missiles heading to Iraq.”

Donald Trump: “Heading toward Syria, and I want you to know that.”

Cousins: Look, I am a guy that absolutely loves desserts. I don’t think I could fool many people by saying that I don’t. I love chocolate cake, too, Donald, but when you’re talking about bombing another country, maybe, just maybe that’s the time to not bring up the scrumptious chocolate cake that you and the President of China are sharing at Mar-A-Lago. Not only that, you’re so damn distracted by this chocolate cake that you forgot the country that you bombed. We got missiles headed to Iraq. You mean Syria? Oh, yeah, Syria, whatever. Here, back to the cake issue. That is crazy talk. Furthermore, all it does is distract people from the initial questions that you were asked and the issue that you’re supposed to be talking about, but this is a common tactic from authoritarian people. You misdirect. You mislead. You change the subject, and you get people to forget what the hell you were even talking about in the first place.

Right now, I’m sitting on a stool, and it’s a great stool, probably one of the best stools we have in this entire building, and it’s been with Ring of Fire for a very long time, and that’s why this particular stool … You see what I did? That’s what Donald Trump’s chocolate cake discussion did. It distracts you from any real points that the interviewer or that even Trump himself were trying to make and makes you focus on something totally ridiculous that has absolutely nothing to do with anything in the world. Donald Trump bombed another country last week. He’s got an armada, according to him, headed towards North Korea, a country that said, “At any sign of aggression, we’re launching a nuclear missile at the United States.”

Hey, yeah, you know what? Let’s go ahead and talk about chocolate cake. Throw in some ice cream discussions in there, too. Get people really riled up because that’s what we need to be focusing on right now.