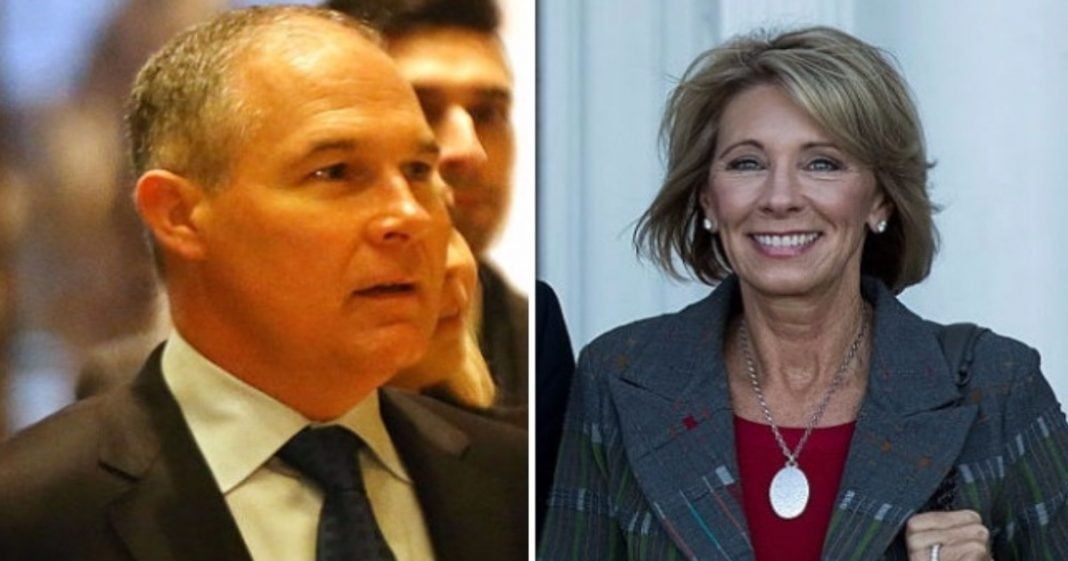 Despite the fact that they belong to the party that opposes “safe spaces,” and “P.C. culture,” two of Trump’s cabinet appointees are requesting that the federal government foot the bill for 24/7 security forces in order to protect them from protesters.

It turns out that when you spend your days attempting to dismantle the vital agencies you were put in place to protect, you might be afraid for your safety.

Both Secretary of Education Betsy DeVos and EPA head Scott Pruitt would like taxpayers to foot the bill for round-the-clock security in order to protect them from angry constituents.

DeVos was granted security coverage previously at the tune of a million dollars a month. Even as she cuts the budget of the agency, she still makes room for taxpayers to foot the bill of her security crew.

When DeVos was confirmed by the Senate for her position, she was at first met with a small group of peaceful albeit angry protesters outside of a D.C. school she was set to enter. While they blocked her entrance and threw some pointed questions in her direction, DeVos was able to access the school from another entry and was completely unharmed by the interaction.

But apparently for a multi-millionaire, having that sort of justified anger pointed your way is awfully scary, which is why the American people must now divert a million dollars that should be going toward education for children to protect the Secretary of Education. But never fear, because DeVos has ensured that we can easily afford her security measures since she has rolled back protections for students loans and gutted other educational programs.

Meanwhile, Pruitt is just now asking for his own security team, citing concerns for his own safety as he works each day to gut the EPA. So far, Pruitt has cut EPA programs, severely restricted the jobs of EPA employees, and plans to cut approximately 3,2000 jobs in the coming months. Thanks to all of that cost-cutting, Pruitt feels he deserves the same security detail as DeVos. Already, Pruitt enjoys some protection as a high-level federal employee, but the agency has now requested an additional 10 bodies to protect Pruitt – costly venture.

“According to E.E. News, former EPA head Gina McCarthy’s security detail normally consisted of six to eight personnel who assisted only during international travel and public appearances. But as Myron Ebell, who headed Trump’s transition team for the EPA, explained to E.E. News, Pruitt sees the extra protection as necessary not just because of protestors, but of his own staffers.”

So not only do these despicable agency leaders get to cut and slash their federal programs however they wish, but they get to do so with the added security of millions of taxpayers dollars dedicated exclusively to their own protection.

Here’s a novel idea, Pruitt and DeVos: stop pissing off the American people and no one will care where you go or what you do.