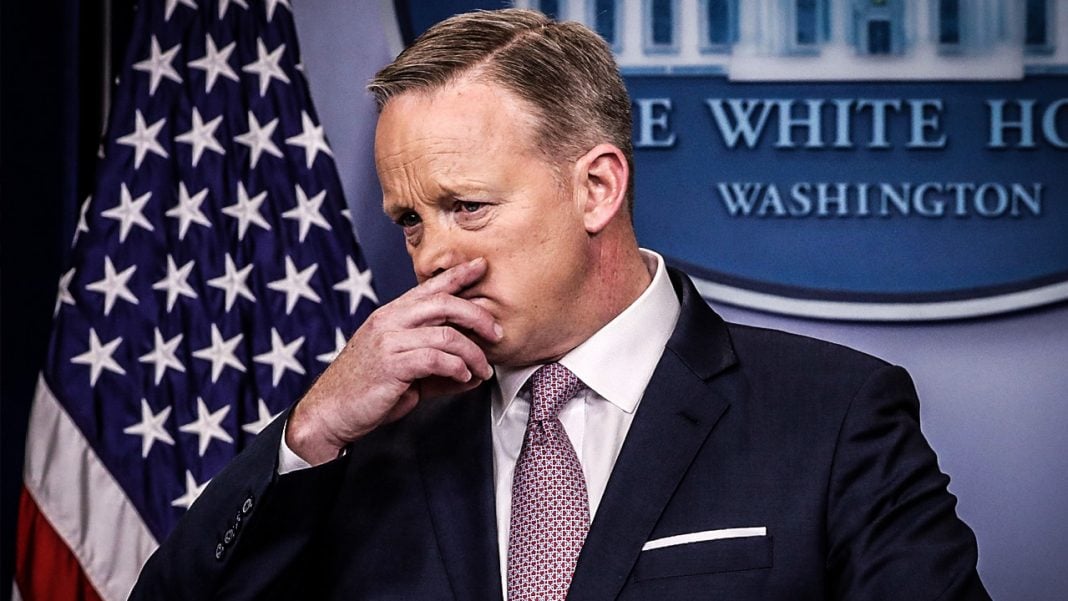 After Sean Spicer made his ridiculous claim that Hitler never used chemical weapons, he received a call from billionaire Republican donor Sheldon Adelson.  Spicer quickly apologized to Adelson – a man who gives millions to the GOP – but the rest of the world is still waiting for their personal apologies. Ring of Fire’s Farron Cousins discusses this.

By now, I’m sure everybody is aware of the fact that Sean Spicer believes that Hitler did not use chemical weapons against his own people in the concentration camps or as I guess Sean Spicer likes to call them, the Holocaust Centers. Obviously, what he didn’t realize or what he doesn’t know or what he chose to omit was the fact that, yes, Hitler used chemical weapons to gas millions of people, so then Sean Spicer comes out and says, “Well, what I mean was that he wasn’t doing it against Germans. You know, he was just doing it against the Jews, right, so I was kind of right.”

The reason Sean Spicer even said this was to justify Donald Trump’s attacks on Syria because Assad used chemical weapons against his own people, which according to Sean Spicer, is worse than anything Hitler ever did. Obviously, the backlash from this statement was tremendous. You had Jewish organizations and non-Jewish organizations calling for Sean Spicer to immediately be fired. You can’t say something as stupid and insensitive and as disgusting as that and expect the world to just keep spinning without any repercussions, but Sean Spicer said, “I’m sorry I said this. It came out wrong. I misspoke.” Whatever. “Let’s move on.”

There was one person who actually made a personal phone call to Sean Spicer to let him know how pissed off he was about this statement. That person got a personal, very personal apology from the White House Spokesperson. That person just happens to be Sheldon Adleson, a massive donor for the Republican Party. The guy has given millions and millions of dollars to Republicans at every level of the government, and he gets a personal apology from Sean Spicer for his insensitive, incoherent, disgusting remarks about the Holocaust.

Now, here’s my question. Where is Sean Spicer’s personal apology to the rest of the world? Specifically, the Jewish community all over the planet? The survivors of the Holocaust? Shouldn’t they be the ones getting the personal phone calls from Sean Spicer, saying, “I am deeply sorry for the offensive bullshit I said.” Because I think that’s what needs to happen here. You can’t just go out on television, give a blanket nondescript apology saying, Generic Apology 105, “I should not have said this. I misspoke.” That doesn’t cut it, buddy. What you said is one of the most offensive things that we have seen come out of anyone in this Administration. You have surpassed Kellyanne Conway as the dumbest person in the Trump Administration. That was a very, very low, or high bar or however you want to say it, to cross, but you did it, Sean. Apologizing to Sheldon Adleson because he gives millions of dollars to your political party is almost as disgusting as the statement you made.