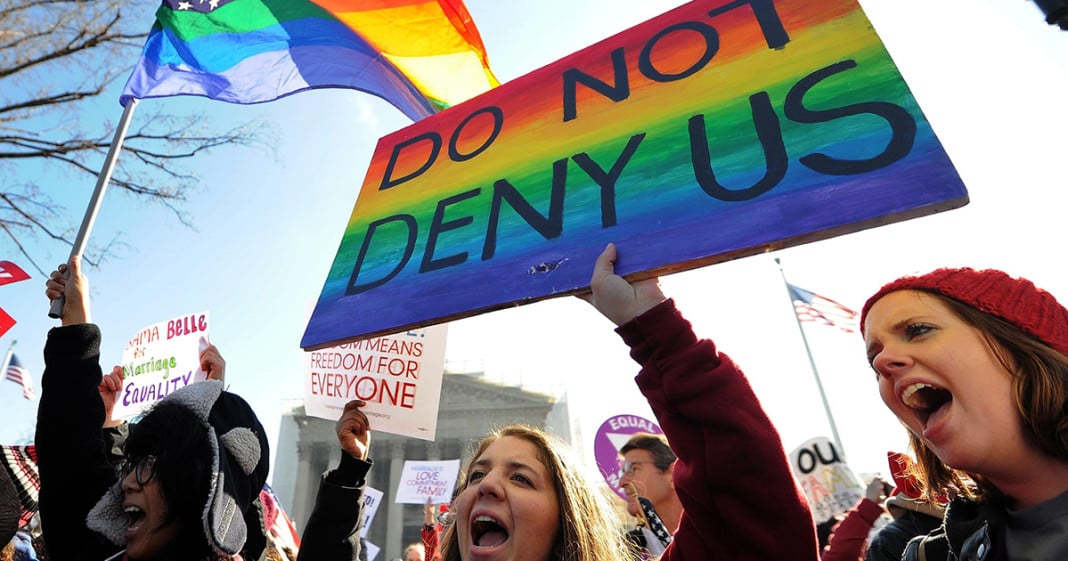 Despite the fact that the controversial anti-trans bathroom bill was repealed, and despite the fact that marriage equality is now inscribed in our U.S. constitution, North Carolina lawmakers are continuing their assault on LGBT rights this week by proposing a new bill to make same sex marriage illegal once more.

House Bill 780 is being called the “Uphold Historical Marriage Act” and, if passed, would cause the state to defy the U.S. Constitution and Supreme Court in favor of restoring the laws on marriage to their former, exclusionary, form.

From The News & Observer:

“The bill says that the 2015 U.S. Supreme Court ruling that legalized same-sex marriage across the country ‘is null and void in the State of North Carolina.’ The bill quotes the Christian Bible and says the ruling ‘exceeds the authority of the court relative to the decree of Almighty God that ‘a man shall leave his father and his mother and hold fast to his wife, and they shall become one flesh’’ (Genesis 2:24, ESV) and abrogates the clear meaning and understanding of marriage in all societies throughout prior history.”

Simply, North Carolina Republicans want to employ the methods usually reserved for anti-abortion laws – ignoring the established laws that will certainly strike down the bill they are proposing in order to make a political stand for their conservative voters.

The law, which Huffington Post argues most likely won’t pass, is similar to one proposed in 2012 by the North Carolina state legislature. At the time, they employed the same tired tactics, even citing the bible in the bill itself, a clear violation of church-state separations. Then, as is now, the bill was considered to be largely symbolic.

Isn’t it time that Republican lawmakers cease this tired tradition of wasting taxpayers’ time and taxes chasing after hopeless bills that have no chance of passing? Issues like abortion and marriage equality are settled law, and no temper tantrum bill from a North Carolina legislature will change that.

The only thing bills like these do is continue to propagate an anti-homosexuality agenda in Conservative states across the nation. As Republicans play fast and loose with major legislation, LGBT residents in the state are left wondering what will become of themselves and their lifestyle.