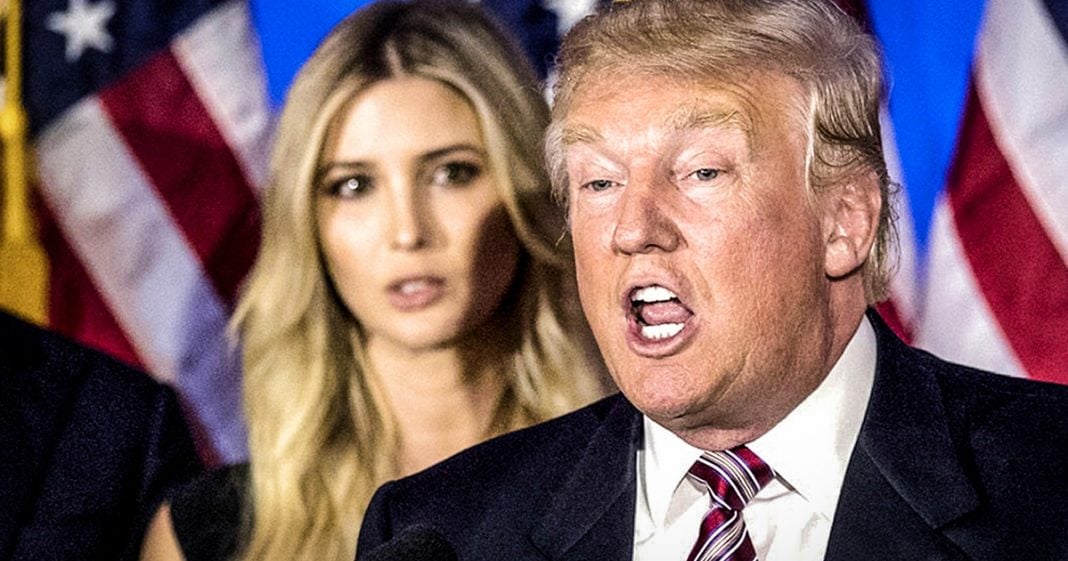 According to the President’s son, Eric, the President made the decision to bomb Syria because Ivanka urged him to.  Supposedly, she was so broken-hearted over the images on the news that she told daddy he had to do something. Ring of Fire’s Farron Cousins discusses this.

According to Eric Trump is was Ivanka Trump that actually persuaded President Donald Trump to lob missiles at Syria after the gas attacks of last week. According to an interview that Eric Trump gave to The Telegraph, he said that, “Look, Ivanka’s a mother of three children. She saw these horrible atrocities, so it’s likely that she went up to the President and said, ‘Look, these are horrible things. We have to do something.'” Apparently that something was lobbing 59 tomahawk missiles at an airstrip that basically caused zero damage because the airstrip was operational just a few hours after the attack.

Here’s the thing, this is dangerous for the United States. If Ivanka Trump can walk up to her daddy and say, “Daddy, I’m upset about a thing. Can you go launch missiles at this thing that has upset me?” Does anybody else see the problem with that? It’s one thing to be a spoiled rich kid to ask your dad to go buy you a fancy new car or a pony, but to ask your father to launch a military strike without congressional approval in another country, that is crossing a line.

A lot of people have thought from the beginning, before Trump was even sworn in, that maybe Ivanka Trump, when they were having all those talks in Trump Tower bringing people in and out, talking about the incoming administration, maybe Ivanka Trump is going to be the voice of reason in all of this. Maybe she’ll be the one to convince Donald Trump that climate change is really. Maybe she’ll bring a little bit of sanity into the White House. Well guess what? That’s not happening. If anything, if this true, if what Eric Trump is implying or alleging is true, then she is more dangerous than we imagined.

One woman who is just the president’s daughter, has this unpaid position in the White House, should not be able to influence her father’s decision on whether or not to launch a military strike. Furthermore, I refuse to believe that, as Eric Trump said, Ivanka was moved by the images of dead children on the television. You know why? Because those missile strikes that Donald Trump launched, also happened to kill some children in there too. We’re no better at this point. Not to mention, we killed more than 1,000 civilians, including women and children, in the Middle East in the month of March alone because of Donald Trump’s missile strikes. But there was no footage of that. We’re not seeing those images pop up on our TV screens. We’re just seeing the bad things that other people do ignoring the atrocities that our government is committing, apparently at the whim of Ivanka Trump.

Now, a new poll came out today that showed that the majority of young women in this country do not like Ivanka Trump. They view her negatively. Forty percent view her unfavorably, 32% view her favorably. This is young women in the United States. The reason this is important is because Ivanka Trump thought she was going to stroll into the White House, being a billionaire’s daughter, and being some kind of role model for young women all over this country. If you’re behind the scenes pulling the strings, telling your father to launch missile strikes against another country, you’re not a role model. If you’re using foreign labor to make the goods for your line of clothing or whatever it is you have, that’s not a role model. There are plenty of women in this country, successful women, using American labor, hiring American employees, and running their American business. Those women are role models, not you Ivanka, and certainly not if, as Eric Trump says, you’re the one who convinced the president to send 59 missiles over to Syria.