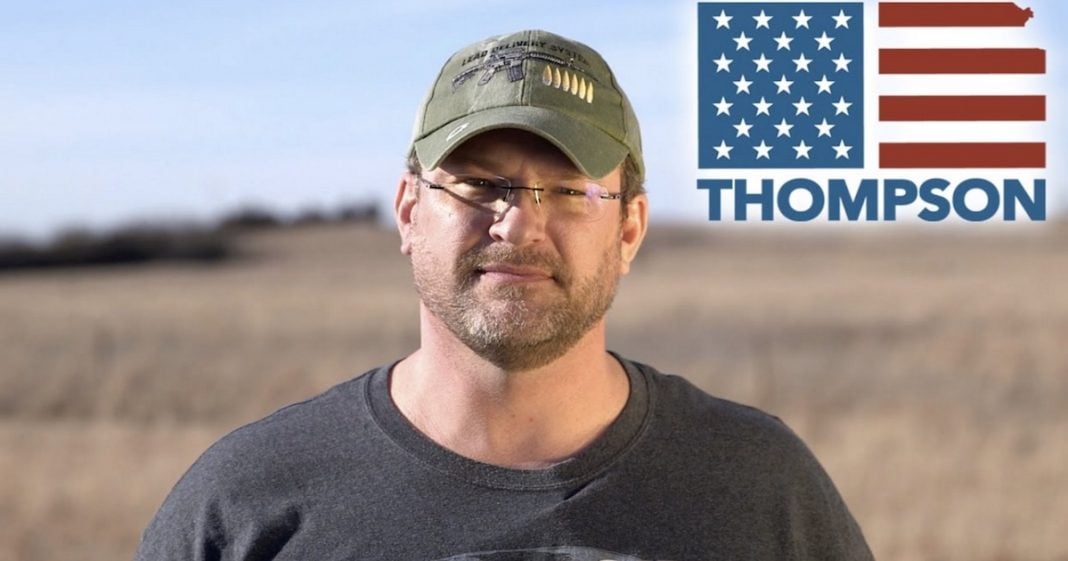 Expected to lose handily to his Republican challenger, political newcomer James Thompson put up a valiant fight in the special election for Kansas’ 4th District and proved many doubters wrong along the way. As of 9:43p CST, the AP is calling the race for Republican Ron Estes, who had served as Kansas’ Treasurer. While the end result is unlikely to shock anyone, the margin of victory gives new hope to the Democrats’ progressive wing. At 9:35p, Wichita’s KWCH reported:

Most believed the race would be a blowout, with Thompson’s own polling showing a 24-point victory for Estes as recently as late March. Thompson stepped into a Republican stronghold and had a strong showing, largely without help from the Democratic party. Ring of Fire detailed Thompson’s tough race earlier Tuesday – you can read that article below:

The special election for Kansas’ 4th Congressional District has been surprisingly close. The seat was vacated by Mike Pompeo who was appointed by Donald Trump to head up the Central Intelligence Agency. The race pits Kansas’ Treasurer, Republican Ron Estes against Democrat James Thompson and Libertarian Chris Rockhold.

On paper, the race should be an easy one for the Republican side. The GOP has held the seat since 1995 and the closest race in the last 15 years was in 2010, where Pompeo enjoyed a 22 percent margin of victory. Trump won the district by 27 points in November. Likewise, a March poll commissioned by Thompson showed that Estes held 56 percent of the vote, with Thompson only garnering 32 percent.

However, Republicans have suddenly grown worried about the race. Many believe the unpopularity of President Trump and Kansas’ Republican Governor Sam Brownback has sparked an ever tightening race. The Cook Political Report still has Estes ahead, but they point to low enthusiasm among conservatives and believe the race will be closer than expected.

Now the RNC is pumping money into the campaign and GOP leaders are rallying voters. The prospect of losing the race has scared the likes of Ted Cruz into campaigning for Estes, while both Vice President Pence and President Trump have recorded robo-calls for the Republican candidate. The Kansas City Star is reporting that:

An internal poll circulating among Republicans showed Estes up by only a single point as of last week. Trump’s call suggests the urgency of the situation. “Ron Estes needs your vote, and needs it badly,” the president says in the call to voters.

The President even tweeted his support on Tuesday morning:

Ron Estes is running TODAY for Congress in the Great State of Kansas. A wonderful guy, I need his help on Healthcare & Tax Cuts (Reform).

Estes’ Democratic opponent Thompson, a civil rights attorney and veteran of the Army, has raised nearly a quarter of a million dollars in the last week from progressive grassroots efforts. The Huffington Post details Thompson’s fundraising success:

Thompson’s campaign said it raised a substantial portion of its last-minute fundraising ― about $85,000 ― via its website over the weekend. Daily Kos appeals accounted for about $143,000 of the total raised, while Democracy for America appeals brought in $12,000. Our Revolution, the progressive group aligned with Sen. Bernie Sanders (I-Vt.), helped contribute $900.

Thompson’s success is remarkable, considering he has had very little support from the state or national Democratic party. When Thompson requested $20,000 from the Kansas Democratic Party in March, the party declined the request, citing a lack of funds.

If Thompson can make this race anywhere close to competitive, it will send a strong signal to progressives around the county that even deeply-held red districts are up for grabs. Grassroots campaigns can using Donald Trump’s lack of popularity to their advantage and mount successful campaigns in traditionally Republican districts.

Still, voters and candidates alike are making it clear that they are prepared to beat the Republicans, with or without support from the Democratic Party. If the DNC does not wake up and support viable candidates, they will not survive.