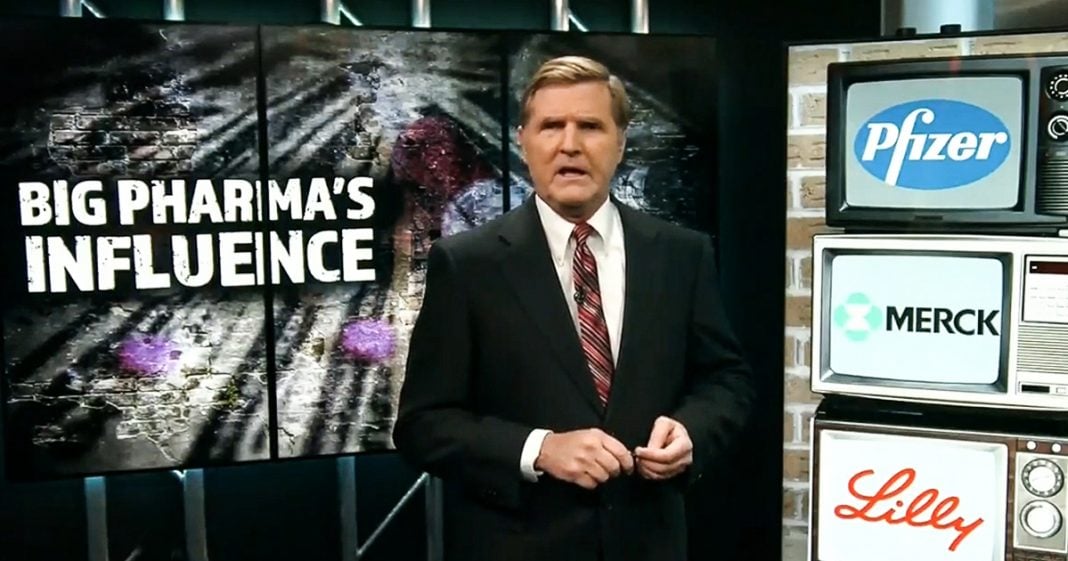 When you tune in to MSNBC, Fox News, or any of the other corporate media machines, you’re probably not going to hear much about the methods in which big pharma is taking advantage of consumers either through price gouging or medical mishaps. The reason for this is because talking about those stories creates a major conflict of interest for the people behind the scenes. Mike Papantonio discusses this with journalist and author Martha Rosenberg.

Mike:
According to a 2009 study by Fairness and Accuracy in Reporting, with the exception of CBS every major media outlet in the United States shares at least one board member with at least one drug company. Let me put it in perspective for you, these board members wake up, they go to a meeting at Merck or Pfizer, and then they have their driver take them over to a meeting with NBC to decide what kind of programming that network is going to air. For those board members who aren’t pulling double duty with a media conglomerate and a big drug company, they still understand that they can’t be honest and objective about big pharma because big pharma pays their bills.

Drug companies spend about $5 billion a year on advertising with these corporate media outlets, so when Pfizer or Merck or Eli Lilly, or any of the drug companies, kill or cripple Americans with defective drugs, do you really think these board members are going to allow their story to be told on the air? It can take anywhere from three days to a full week before the media reports on a drug or a medical device recall, if they report at all.

In the case of Invokana it took 32 days before television outlets reported a single story involving an FDA warning about the potential problems with the product. The FDA began warning about the extreme dangers of Cook IVC filters as early as 2010 and it took about five years, five years, before television media started reporting that to the public. It’s worth pointing out that in these instances it was only through non-corporate independent media outlets that these stories were told at all. It was the outlets who weren’t being forced, they weren’t being forced to remain silent about the drug industry.

You can replace IVC or Invokana with any other drug or product and the story is all the same. Stryker hip implants, C8, Vioxx, RoundUp, Xarelto, talcum powder, they’re all the same thing. The corporate media doesn’t care about these stories because they either share board members with these companies, or because they want those companies to keep throwing dollars their way in big advertising dollars. These gigantic media corporations aren’t going to do anything to threaten their relationship with big advertisers.

Drugs are cash cow advertising bonanza for corporate media. Fortunately an increase in number of Americans who are starting to wake up and realize that the mainstream media shouldn’t be trusted on issues like this. In recent years we’ve seen the alternative media experience rapid growth and mainstream media has been losing credibility at a staggering rate. Americans are starting to look elsewhere for the truth about what’s really going on out there. As a result of that advertising money kicking around the corporate media isn’t permitted to report complex drug stories anymore.

It’s as if they don’t understand things like the link between crony capitalism and the revolving door between the FDA and the drug industry, but the media is only one side of the story here. Big pharma knows that if it wants to continue manipulating the public it has to start with our elected officials in Washington DC. According to OpenSecrets, big pharma spent more than $58 million on politicians just in 2016, the most amount they’ve spend on a direct contribution in the last quarter century.

When it comes to lobbying, few industry spend more than big pharma did last year. They spent a staggering $244 million dollars to influence our elected leaders in Washington DC. It looks like things are about to get much worse, you see, big pharma understands that the ridiculous … their price gouging is starting to draw negative attention from the American public, and no matter how much they spend advertising or buying our politicians, they can’t keep the public anger down forever.

According to a new report by ProPublica, drug companies are offering huge money to any scientist, any professor or academic willing to author studies that are going to show that these drug markups are necessary, that they’re just fine. Their goal is to spread around enough money at universities to develop scientists and doctors who are going to create this fantasy story about how price gouging is just great for the American public, and then that story will be run by corporate media, dominated by the drug industry.

Joining me now to talk about big pharma’s influence over our daily lives and their quest for even more power is Martha Rosenberg, an investigative health reporter and the author of the book, Born With A Junk Food Deficiency. Martha, is it an overstatement to say that big pharma, they have a firmer grip on our daily lives than most people realize, where it comes to the drugs that we take?

Martha:
No. No Mike, I don’t think it’s an overstatement at all. I think this is the year that we celebrate 20 years of direct-to-consumer ads. Any time people are watching TV, they’re seeing the drug ads, and then on top of that there’s PR campaigns going on. One of which on the Sunday news shows that were trying to objectively talk about Obamacare, they were financed by a PR campaign called Go Boldly, which is trying to defend the high prices. In addition to the direct-

Mike:
Martha, all you have to do is watch the nightly news. You’re liable to see eight advertisements for Merck and Pfizer, Johnson & Johnson. How can that not be influencing the reporters or the executive producers of that programming? They know where their money is coming from, they know where they’re getting this money, that some cat on the 50th floor makes this decision that says, “You know, we can’t tell these stories where drugs are killing people. We can’t tell it because we’re going to lose advertising dollars.” Can’t you basically already see that just by watching the nightly news and seeing those advertisements?

Martha:
Of course you can. They won’t report on the dangers which of course you and I know about, and also they plant the idea in many people’s minds that they are sick and they need the drugs. That disease mongering is a big part of it. The screening, when they’re always saying, “Ask your doctor, you might have this or that disease,” the screening causes over-diagnosis, over-treatment and over-medication, which pharma loves.

Mike:
Most people who handle cases in this industry, they look to you first on a lot of this reporting because you catch the stories certainly before corporate media does, or if corporate media gets it before you, corporate media doesn’t tell the stories because they’re ordered not to by their advertisers. But it’s not just corporate media that’s the problem, don’t we also have a problem with, they’ve put so much money into the political schemes taking place in DC. They bought politicians, there’s no other way to put it. The money is staggering, $244 million just for lobbying, endless money to individual campaigns. Don’t you see that happening as you follow these stories?

Martha:
Definitely. I think that it’s one of the most expensive lobbying machines there is, the big pharma. What they’re doing now, big pharma and bio pharma are trying to defend their price, so we see a lot of that. Yeah, there’s no question. Up until the Affordable Care Act there was no hiding all the perks that doctors got, and there were examples in China, GSK, which is a big pharmaceutical company, was buying sex bribery to sell their drugs. Here in the US according to charges, Victory Pharma was buying lap dances for doctors to prescribe its opiates.

Mike:
There’s worst stories than that, some of the stories we can’t even tell on the air. Let’s talk about this new ProPublica report about big pharma trying to pay scientists, I call them biostitutes. They’re doctors and scientists who will write anything the industry asks them to write for a check of $100,000. They’ll write anything.

Right now we have the industry going around trying to find these biostitutes that will say, “It’s just fine that the industry has these huge markups, even though sometimes it’s 6,000% markup on a drug, 10,000% markup.” They actually are going to find scientists and doctors who say, “That’s absolutely appropriate. The industry needs to do it.” You and I know that’s a lie because most of the money that they spend goes to advertising, it doesn’t go to R&D. What’s your take on that?

Martha:
Yeah, right now what pharma has done Mike is, it’s replaced its blockbusters like Viagra and Lipitor with what we call biologics. That would be your vaccines and your liquid injectable drugs. That enables them to charge what they’re now charging. Now they’re in the process of trying to defend those charges. Now, the ProPublica report, it reveals the machinery between academia and big pharma, which is not really new.

The ghostwriting and what we used to call conflicts of interests, they now call private-public partnerships and it’s our tax dollars going on. But yeah, the academics are now writing the papers and not only are, pardon my French but not only are the journals pimping for big pharma but pharma will create its own journals to make sure its message gets out there. These academics are part of the whole thing.

Mike:
Okay, so let me put these parts together. The industry goes out and finds these biostitutes, who will say anything for the right amount of money. I see them in court every single day, up on the witness stand, testifying, lying, knowing they’re lying, absolutely misrepresenting the truth about everything, because they’re getting paid a lot of money. Now what you have is you have them, they find the biostitute, the biostitute writes the story and the next thing you know, mainstream corporate media, like NBC, MSNBC, ABC is reporting that story that was created by the biostitute. Did I get that right?

Mike:
As I follow this, of course, this story is going to continue to build because we’re going to start seeing a lot more of these stories coming out, they’re horrendous stories. Last week we saw Bernie Sanders pushing back, the Democrats won’t get behind him because the Democrats are as much part of this as the Republicans are. The pharmaceutical industry, they’re just spreading around a lot of money. I have to tell you something, I appreciate you joining me tonight, okay?

Martha:
Thank you so much. Thank you for your good work Mike.