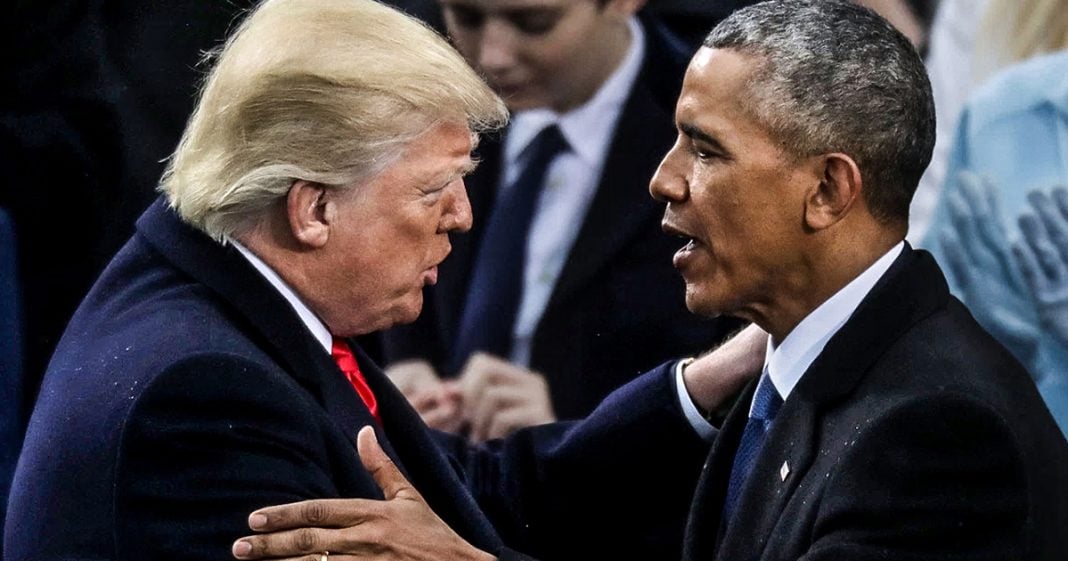 Donald Trump repeatedly attacked Barack Obama for golfing while president, a theme that Republicans hammered on for 8 years.  But Donald Trump has actually surpassed Obama’s leisure time, and he’s spent twice the amount on travel in just 11 weeks that Obama spent in 2 years.  At this pace, Trump’s travel for one year will far exceed the totals that Obama spent throughout his entire presidency. Ring of Fire’s Farron Cousins discusses this.

Last week after Donald Trump sent those tomahawk missiles into Syria some really great investigators on Twitter found a tweet from Sean Hannity from 2013 talking about the fact that, “It’s great that our leader,” then Barrack Obama, “has the audacity to launch a military strike against Syria and then go play golf.”

The reason they did that is because after Donald Trump launched these missiles into Syria, what did he do? He went to go play golf, just like he has done every single week since becoming president of the United States. Now I’m not going to begrudge anyone for wanting a little bit of time off, but the man has been in office for 11 weeks and hasn’t gone a single week without playing golf, without taking a vacation or at least a mini-vacation.

Here’s the reason this is important, this is important because Republicans are the ones who’ve made this a campaign issue, who have made this a point of attack. They did it for eight straight years under president Obama, and now the tables have turned because according to the numbers Donald Trump has now spent almost twice as much as president Obama spent in a full year on travel, and Trump managed to do it in just 11 weeks.

In 11 weeks Donald Trump has used $21 million of taxpayer money to go out of town, to go on vacation, to go to Mar A Lago, to go golfing. Basically to go have some fun, unwind, as both the United States and countries in the Middle East continue to deteriorate. $21 million in 11 weeks. Let me put that into a little better perspective here. President Obama spent $12 million a year for all eight years that he was in office. That is the highest of the high of the estimates if you go with the lower numbers he spent about $8 million a year. But let’s stick to the 12 million.

12 million per year, 21 million for 11 weeks. At this current pace by the end of this first year in office for president Trump he will have spent more on travel than president Obama spent in eight years. Republicans are still pissed off. I talked about this a couple weeks ago, they’re still pissed off at president Obama for going out and golfing, for using taxpayer money to go places or for secret service protection for Michelle Obama. Those were the kind of comments I got on both Twitter and YouTube on the last segment I did talking about Donald Trump’s continuous vacations.

Guess what? The numbers do not support your arguments anymore. Your president is the one ripping us off so that he can go play golf at his own golf course, because we lose that taxpayer money, but you know what happens when he goes and stays at Mar A Lago or he goes to a Trump branded golf course to play golf? He gets that money back. He’s taking money out of your pocket and paying it to his own corporations which will then end up paying it back into his pocket.

He’s stealing from us folks. He’s taking our money, going on vacation and getting the profits from those vacations because he’ll only go to places that he owns. Now if Donald Trump wants to spend his time golfing, if he wants to spend his time hanging out at his resorts and having fun, he can do that, but first he needs to resign from the office of the presidency. If he is not going to take this job seriously then he needs to voluntarily leave and let the grown ups, the people who are used to working hard, take over. Because Donald Trump does not have the work ethic or the intelligence to hold the office of the president. His first 11 weeks have proven that beyond a shadow of a doubt. This man is too juvenile and too frigging lazy to be the president of the United States.