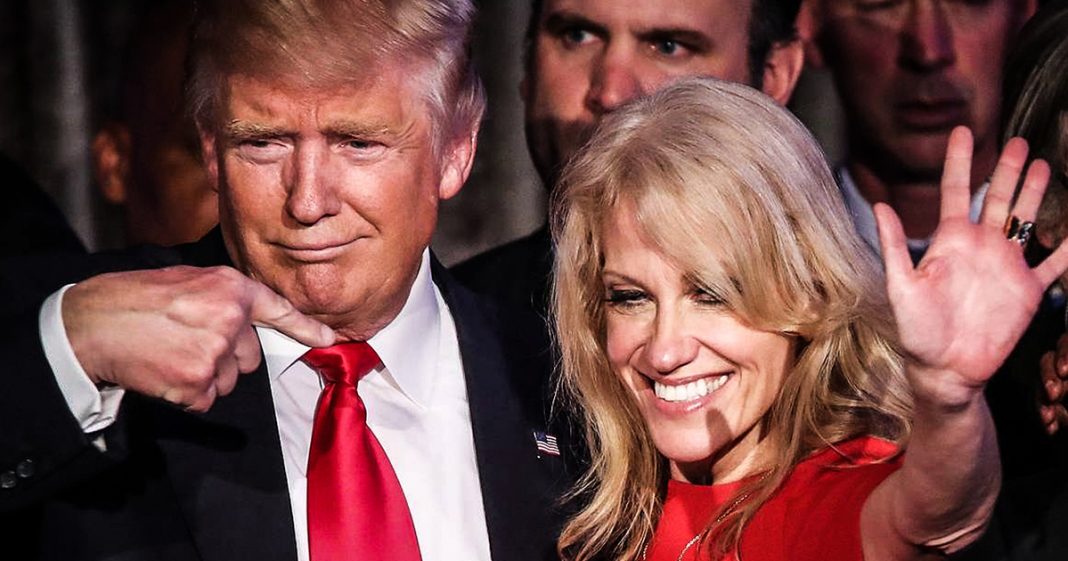 Over the weekend, White House staffers descended upon Mar-A-Lago to help Donald Trump “rebrand” his administration. As part of their exercises, they were given markers, white boards, and rolls of paper and separated into teams to write down all of Trump’s accomplishments since taking office.  This is what children in elementary school do, not people working for the President of the United States. Ring of Fire’s Farron Cousins discusses this.

A little bit of news that went completely unnoticed from last week was the fact that the Trump administration is literally treating its staffers as if they were children in elementary school. While he had Jared Kushner and Steve Bannon go to Mar A Lago together to work out their differences, earlier in the week, he had White House staffers, including Kellyanne Conway all get together. Broke them up into teams of three and each group was given either a white board or rolls of brown paper that you used to see in elementary school art class. Each group was supposed to come up with a list of accomplishments from the Trump administration.

Basically what they wanted them to do was everybody breaks up into groups of three. You sit there and you write out all the things you love so much about Donald Trump. Now they were instructed to stay away from any kind of international affairs. Don’t talk about any foreign policy. Just the things that we’ve done here in the United States. This was actually before the airstrikes in Syria, but what’s funny about this is that this is what happens to children in elementary school and obviously while some of these White House staffers including Kellyanne Conway probably have the mental capacity of a small child, the rest of them are grown adults who understand how the world works. They’re professionals. They have a career. They shouldn’t be forced to sit with very large pieces of paper and Crayola markers and come up with a list of things that you’ve done well, Mr. President. That’s not their job to sit there and fluff you behind the scenes, but that’s what you’re making them do.

The real sad irony about this is, you have no accomplishments. The only thing that you could possibly take credit for at this point is the confirmation of Neil Gorsuch to the Supreme Court which most people wouldn’t necessarily consider that an accomplishment considering how horrible this guy is. I mean Gorsuch, something that kind of went unnoticed during the confirmation hearings, was one of the guys that helped former attorney general Alberto Gonzales legalize or provide the rationale for legalizing torture under the Bush administration.

Regardless, Donald Trump thinks so little of his staffers in the White House, and yes that does include Kellyanne Conway and I keep throwing her name out there because I am sure that she was overly enthusiastic about this. This was probably a task that she was really, really good at and really excited for. Coloring with markers. I bet you Kellyanne Conway knocked that one out of the park. But as for the rest of these people, they didn’t necessarily choose to be in this kind of situation. They were, most of them I guess probably devoted to this country, understand the enormity that comes with such a job, working for the President of the United States, and instead they’re reduced to little children in kindergarten, pulling out their markers and crayons and writing a list of why we love dear leader so much.

That is what Donald Trump has turned the White House into. This is no longer an institution that projects this image of superiority. This image of respect. This is a White House that thinks that it’s perfectly reasonable to take people off their job, give them big pieces of paper and markers and make them come up with lists of good things you did. That’s not how the White House is supposed to work, but that’s how it’s working under Donald Trump.