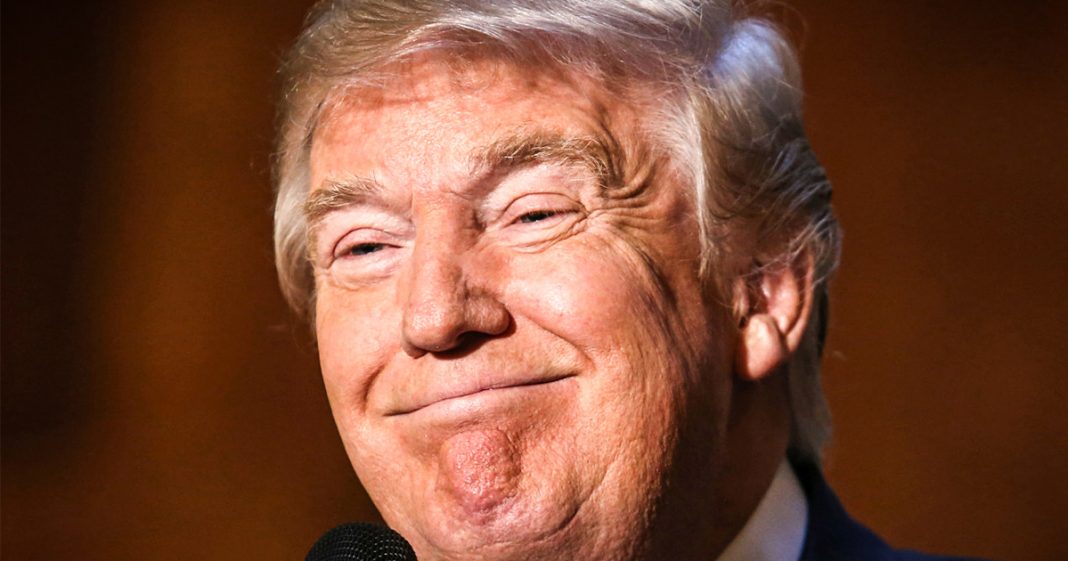 According to the latest reports, Donald Trump owns stock in Raytheon, the maker of the Tomahawk missiles that Trump lobbed at Syria last week.  And when the attack occurred, the company’s stock went through the roof, making Trump that much richer.  But still, the media keeps telling us that Trump now looks “presidential,” because they refuse to actually do their jobs. Ring of Fire’s Farron Cousins discusses this.

As it turns out, the Tomahawk missiles that Donald Trump lobbed at a Syrian airfield last week, manufactured by Raytheon, Donald Trump actually profited off that missile strike because he happens to own stock in the Raytheon corporation. According to campaign filings, campaign disclosure reports from 2015, Donald Trump owns stock in several defense firms, including Raytheon, who manufactured all 59 of those Tomahawk missiles that Donald Trump hit Syria with last week. Additionally, after the strike and sensing that tensions across the globe were heating up, Raytheon stock went through the roof, making Donald Trump even richer than he already is. This begs the question, is Donald Trump launching these missiles, carrying out these air strikes only because it’s going to make him money? Signs would obviously point to yes, but we can’t definitively prove that.

However, here’s one thing we can prove. The corporate media is ready for another war. Ever since Donald Trump launched this disastrous air strike in Syria, which by the way did little damage as the airfield that he hit was fully operational the next day. Regardless, media outlets, even those who have been critical of him, started coming out and say, “Well, Donald Trump just started to look presidential. Doesn’t he look great out there firing these missiles, standing up for America like this?” Now as a result of all this fluff that the media has given him, a majority of the people in the United States are actually in favor of the missile strikes against Syria. Now, my question is have you people learned nothing? Do you not remember Iraq? Has it been that long really? Do you not understand what’s happening here?

The media is giving Donald Trump all kinds of positive coverage right now, and so what’s his response to this suddenly great coverage? Well, we’re sending warships over to North Korea, because if it worked once in Syria giving him positive coverage, a majority of people finally approve of something he does, let’s go do it again to another country that may or may not have nuclear capabilities. That’s what’s happening. They’re feeding his ego and so he is going to continue to escalate it. At the same time, he’s going to pull in an assload of money from it because he’s invested in the defense firms that he’s buying missiles from.

This is a disgusting situation happening right now, and too few people out there in the United States are talking about all of the pieces of this puzzle, but that’s what it is. It’s Donald Trump using these air strikes to enrich himself and enrich the companies that he’s invested in. It’s the corporate media finally giving him positive coverage, which is only going to encourage further action from the president, and it’s the American public buying into the BS that the media is selling them that this was somehow a successful move, or that Donald Trump suddenly looks presidential.

He looks like a jackass that’s getting rich off of the suffering of other people in other countries, because that’s what’s happening right now. He should be forced to sell all of his stocks, not put them in a blind trust. Get rid of them today, because once again we’re talking about yet another violation of the Emoluments Clause. Nobody’s talking about it, but this is one of many examples of it. He is using the office of the presidency to make himself even richer, and that is against the law, except this time it’s not just going off to Mar-a-Lago and getting those checks from the government to pay for Mar-a-Lago, which goes back into his pocket. This time it’s off the deaths of people all over the globe, and as long as the media continues to talk about how great he looks doing this, the situation is only going to get worse.