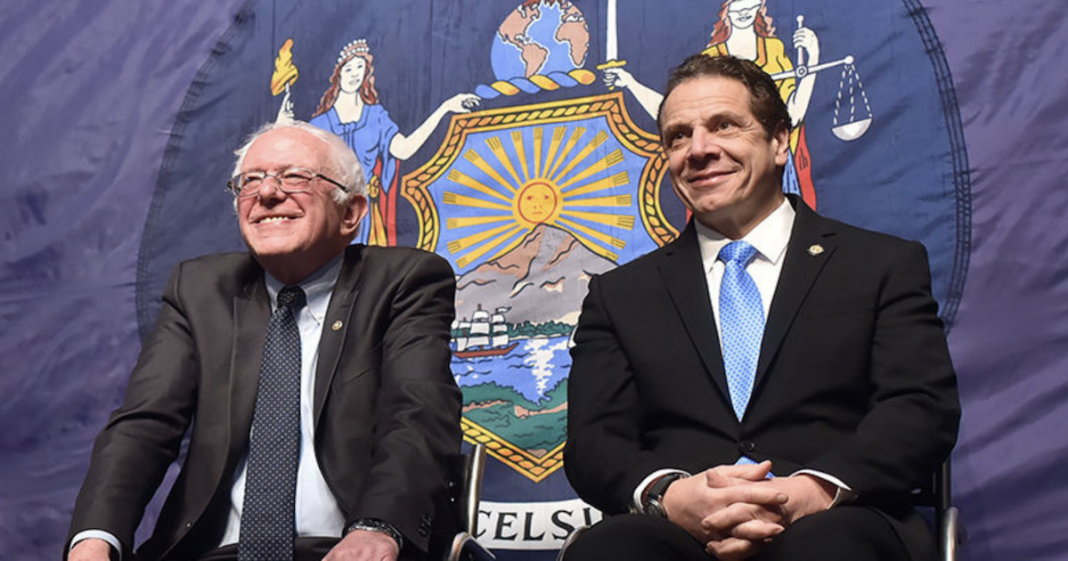 As of Sunday night, New York’s legislature approved the state’s budget bills, which are expected to be signed by Governor Andrew Cuomo. Included in the budget bills is a measure to fully fund tuition costs at public universities and colleges for undergraduate students from families earning under $125,000 a year. Governor Cuomo’s office estimated that the scholarship will cost around $163 million in the first year, in addition to the over $1 billion that the state already spends on financial aid.

Gov. Cuomo first introduced the Excelsior Scholarship in January in a speech at LaGuardia Community College. Joined by Senator Bernie Sanders on stage, the governor highlighted the pain felt by many college students:

“It’s incredibly hard and getting harder to get a college education today. It’s incredibly expensive and debt is so high it’s like starting a race with an anchor tied to your leg.”

The scholarship does have several stipulations tied to it, including the mandate that students must take 30 credits each year, which effectively excludes part-time students. However there is room for flexibility if a student is facing a hardship. Students must also live and work in New York for a period of time equal to the time they received the scholarship. If they do not follow through with that requirement, the scholarship will be converted to a loan. There are also stipulations for minimum GPA and graduating on time.

The cost of tuition in New York’s state schools ranges from $4,350 at community colleges to $6,470 at four-year schools, which will be fully covered under the new plan. If a student already qualifies for another scholarship or grant that does not already fully cover tuition, the Excelsior Scholarship will make up the difference. For middle-class students attending privately-run schools, the budget includes up to $3,000 in financial assistance, which would have to be matched by the college. Room and board and additional fees are not covered, however. Students living on campus at New York’s public state universities will spend $18,120 in school related expenses beyond tuition.

The finalized measure is a mixture of the one originally proposed by the Governor and a plan offered by Republican lawmakers. Republicans wanted to expand the state’s existing Tuition Assistance Program, which would have allowed students to apply between $500 and $6,470 to private or public school tuition in the state, while still basing the final award on need. The Governor’s plan had fewer stipulations. The Republican plan offered some level of assistance to more students, but did not fully cover tuition for all of them.

When the bill is signed, New York will become the first state to make tuition free at four-year colleges. Tennessee and Oregon already have made tuition free at community colleges, with Rhode Island debating a plan to fund two years of tuition at its public colleges.

According to The Institute for College Access & Success, 59% of New York students left four year colleges in debt. On average, those students carried $29,320 in financial obligations. While this plan won’t help students with living expenses or transportation costs related to attending school, it is a still a massive step in making college more accessible and affordable for middle-class students.