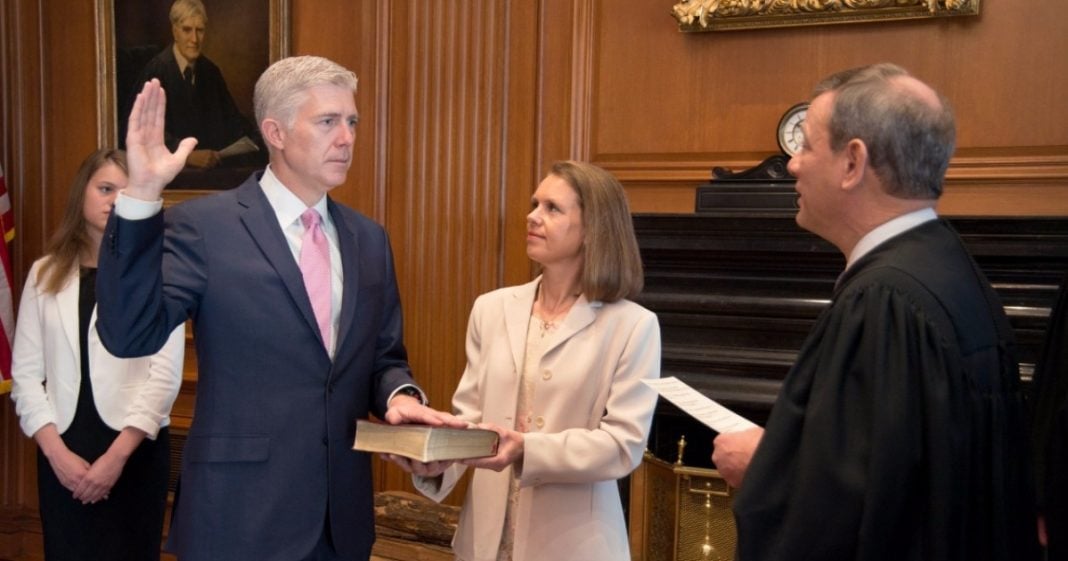 On Monday morning, Trump nominee Neil Gorsuch was sworn in to the Supreme Court of the United States, joining the eight other justices on the bench. This marks the first time in over a year that the highest court in the land reported nine members instead of eight.

Gorsuch was sworn in by his former mentor and Chief Justice Anthony Kennedy, with his wife Marie Louise holding the Bible on which he placed his hand.

The Justice was confirmed for the Supreme court in a partially bipartisan vote of 54 – 45, with three Democrats voting for the Trump appointee.

Gorsuch was a much contested SCOTUS nominee and many consider his seat to be stolen and his position on the bench as illegitimate.

The justice fills the seat left vacant by the unexpected death of conservative Justice Antonin Scalia who died early last year. Though President Obama put forth a moderate SCOTUS nominee, Merrick Garland, Republicans seized on the POTUS’s final year and refused to even hold a hearing on Garland.

Democrats fought to keep the Gorsuch from being put to a vote, citing Merrick Garland’s lack of one in 2016. Democrats held a 15-hour filibuster and managed to unite in numbers large enough to stop a vote.

In response, Republican leadership elected to employ the “nuclear” option and change the rules of the Senate from needing a 60 vote threshold to just a 51 vote threshold, handing the decision-making to the Republican majority.

Now that Gorsuch has been established in the Supreme Court, Republicans are pressuring Kennedy to retire. Kennedy is the most senior member of the Supreme court and often serves as the swing vote on many rulings. Though Kennedy was appointed by a Republican president, Ronald Reagan, his voting record does not fall strictly along party lines.

President Trump attended the swearing-in of Gorsuch and heaped praise on Kennedy, hoping to make the Justice feel comfortable enough to retire under his leadership. If Kennedy were to retire, Trump certainly attempt to fill his seat with another far-right judge like Gorsuch, ensuring a conservative majority in the Supreme Court for years – and even decades.