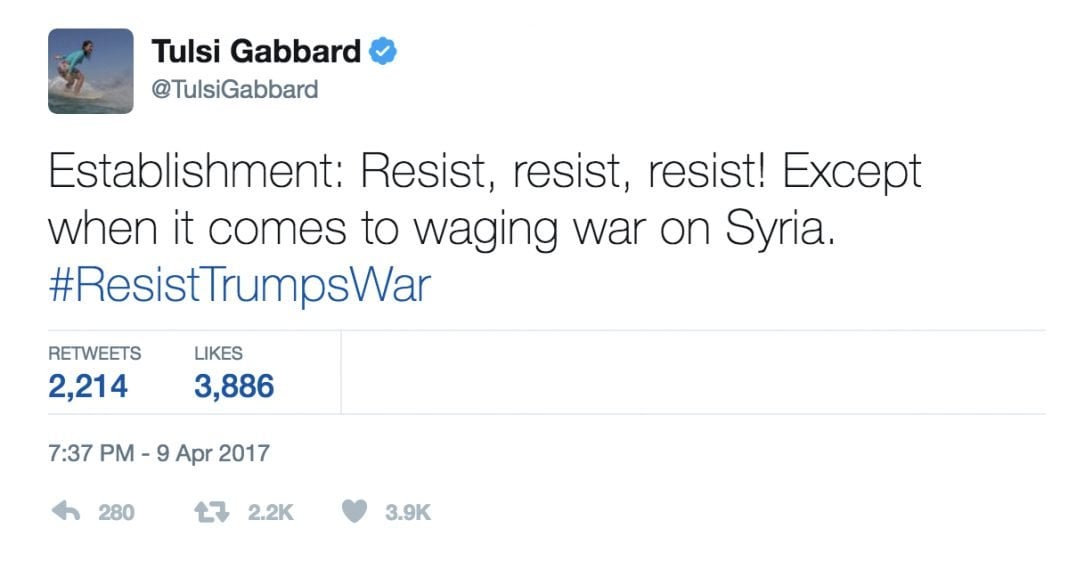 As world leaders and the corporate media praise Donald Trump’s missile attack on a Syrian airbase, Representative Tulsi Gabbard of Hawaii remains skeptical of the chemical attacks that sparked the United States to act in the war-torn country. However, her insistence on fully investigating the incident has earned her intense criticism from both sides of the aisle.

Of course, Rep. Gabbard is no stranger to criticism stemming from her promotion of her non-interventionist views. After traveling to Syria and meeting with President Bashar al-Assad, she was labeled “The Democrat that Republicans love and the DNC can’t control” and “Assad’s mouthpiece” by The Washington Post  and called “The GOP’s Favorite Democrat” by The Atlantic. The veteran of the Iraq War has particularly strong views on violence stemming from Islamic fundamentalism and has voted for increased background checks on Syrian and Iraqi refugees. She also drew particular disdain from the establishment members of the Democratic party over her resignation from the DNC and her vocal support for Senator Bernie Sanders.

Now Democrats are lining up to attack Rep. Gabbard once again, this time because she has not joined the chorus of praise that has lauded President Trump for ordering a strike in retaliation for Assad’s alleged use of chemical weapons.

People of Hawaii’s 2nd district – was it not enough for you that your rep met with a murderous dictator? Will this move you?1 https://t.co/jbwGuZIJ6R

This is a disgrace. Gabbard should not be in Congress. https://t.co/yDTh43GZam

It seems though, that those pundits have a short memory, as the international community was calling for a full investigation into the chemical attack prior to the US intervention. The UN Security Council drafted a resolution calling for an investigation at an emergency meeting last week. British Prime Minister Theresa May and German Foreign Minister Sigmar Gabriel also have called for an immediate investigation of the suspected gas attack. While evidence strongly points to the attack being carried out by Assad’s troops, it has been reported that ISIS troops have used chemical weapons and Syrian rebel groups have been experimenting with chemical weapons for several years.

In her CNN appearance, Rep. Gabbard cited the now disproven narrative of Iraq’s possession of WMDs as a reason for her distrust of the storyline that was so quickly accepted. She went on to explain that her goal for Syria was to see peace return to the area:

“Why should we just blindly follow this escalation of a counterproductive regime-change war? There’s responsibility that goes around. Standing here pointing fingers does not accomplish peace for the Syrian people. It will not bring about an end to this war.”

But her calls for peace have been brushed aside by neocons on both sides as pro-Assad propaganda. It is disheartening to see so many Democrats and Republicans alike feverishly cheering for war. With the corporate media on their side, the lobbyist-paid war pimps of Congress will bash anyone that gets in the way of their profitable attacks.

Establishment: Resist, resist, resist! Except when it comes to waging war on Syria. #ResistTrumpsWar