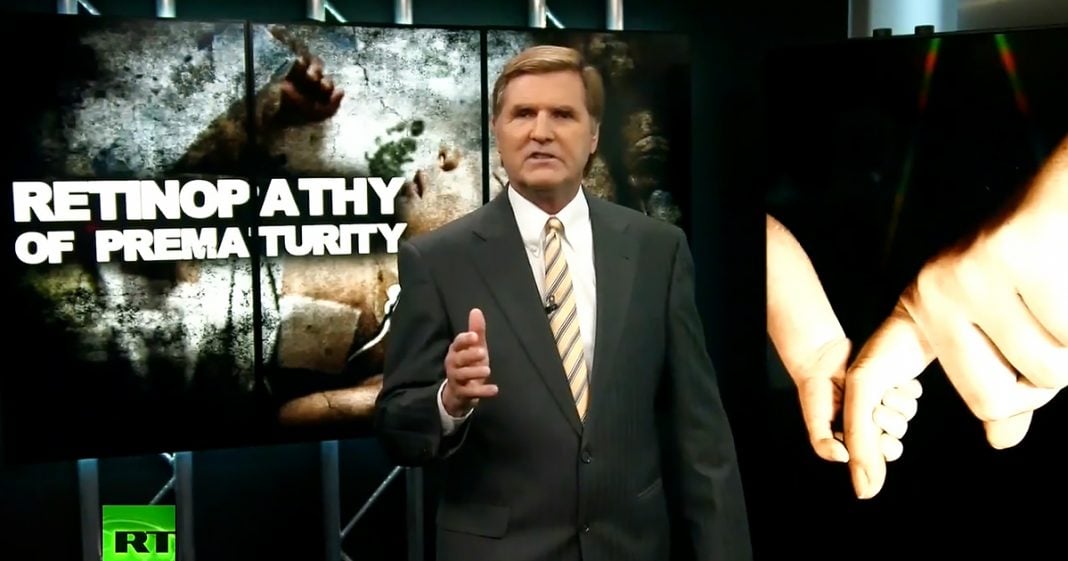 In the United States, roughly 10% of all infants are born prematurely. And while premature infants face a number of health problems in their first few weeks, one of the most devastating and preventable illness is a condition called Retinopathy of Prematurity. This is a condition that can cause permanent blindness in infants, and it is also one that an attentive medical staff can prevent.

Mike Papantonio is joined by attorney Virginia Buchanan to explain why this is happening and what you need to know to keep your newborn safe.

Papantonio: The Centers for Disease Control tell us that one out of every ten babies born in the United States is born prematurely. And while premature births steadily decreased between 2007 and 2014, 2015 saw a slight increase in the number of babies born early. That’s the most recent year of full data.

Doctors currently don’t have an answer as to why the number of pre-term births are rising, but they are well aware of the difficulties and health problems that pre-term infants go through.

In order to help pre-term infants survive, they are often placed on breathing machines, supplied with feeding tubes, given medications, and kept in incubation until they are able to survive without the help of doctors and nurses. But even with all of these precautions, problems still persist, and some of those problems can actually be made worse by these measures.

One of those problems is Retinopathy of Prematurity, a condition that has become common in pre-term infants with low birth weights. This condition is an eye disease that typically is corrected and results in no long term health effects for the child. But each year, more than 1,200 severe cases of Retinopathy occur. These severe cases can result in the complete detachment of the retina or blindness, and as many as 500 newborn infants go blind as a result.

Retinopathy of Prematurity is responsible for 15% of all childhood blindness cases in developed countries, and it is responsible for as much as 60% of cases of blindness in children in middle income countries.
What’s worse is that this disease can be prevented and treated if caught early enough, but that requires attentive care from doctors, nurses, and pediatricians. And a caregiver that doesn’t pay attention to the warning signs can cause a child to go their entire life without the ability to see.

What happens with this disease is that the blood vessels in the eyes don’t develop properly, a condition that can be easily detected with standard medical equipment. Once the pre-term child has been born, these under-developed blood vessels can begin leaking blood into the eye, resulting in scarring that leads to partial or complete detachment of the retina.

Again, caregivers are well aware of the signs and symptoms of this disease, and simple tests can be performed to determine if a pre-term child is at risk. But a negligent caregiver that ignores the warning signs or simply fails to perform the necessary tests or refer the family to a specialist can doom a child to a life of hardship, surgeries, and possible blindness.

Papantonio: Joining me now to explain the risk of this disease and how negligent caregivers play a role in childhood blindness is attorney Virginia Buchanan who’s represented the families of infants who’ve suffered from retinopathy of prematurity. Virginia, first explain exactly what this disease does and how it can cause blindness in preterm infants. How does it work?

Virginia: Yes, Michael, as you were saying, this is a worldwide problem and it’s one that affects about 15,000 infants in this country each year. There are a large number of premature infants and out of those, the 15,000 who have it, most recover fully, as you say, but about 1,200 of them have very severe retinopathy of prematurity. What that means is that thin liner behind the eye that serves to reflect light and that plays a key role in vision, becomes scarred and causing the retina to detach. The retina has the thickness of, like a saran wrap, a clear plastic wrap, and it has the strength of wet tissue. Therefore, it is very vulnerable any it’s very susceptible to injury. When these blood vessels scar by rupturing and pulling, the retina detaches resulting in visual loss.

What we encourage the American Academy of Pediatrics, all of the professional ophthalmology organizations encourage serial examinations of preterm babies. Particularly those infants who are under 31 weeks and under three pounds, they’re encouraged to have serial exams because all you can tell initially is that the baby has abnormal blood vessels. Typically, you don’t see detachment immediately.

Papantonio: Virginia, let me ask you this, how does negligence or substandard care factor into the prevalence of this problem? When we analyze everything, this condition, what are the caregivers doing or what are the not doing that cause this to be a bigger problem than it should be? How does it progress in some infants?

Virginia: Yeah, that’s an excellent question. Because, when you look at those 1,200 that we are saying who have very severe untreated retinopathy of prematurity, and you compare them to the other premature, very low birth weight babies, some being blind, some not, what we see is those who are able to recover from the condition have these serial assessments by ophthalmologist who are trained to look for these abnormal blood vessels and to administer treatment. There are a series of things that can be done and those babies who go on to have, maybe some visual impairment, they might need glasses, but they have good vision, they’re able to be fully functional, they have those serial assessments. They go, and really beginning just a few weeks after birth, they start having these assessments.

The frequency of them depends upon the amount of abnormalities seen at each successive exam, but for example, a stage 1 and early retinopathy of prematurity still has to be followed because it can progress. Even as a child goes on and matures over time, and the eye grows, and the body grows, the retina can detach even beyond that immediate timeframe where the infant is truly still premature.

Papantonio: I know you get calls on this. You’re a specialist in medical malpractice, and you’re seeing more of these calls, and I’m wondering what do medical professionals, if you had the chance to give a speech to medical professionals who are very well trained in this kind of care, what is it that you would tell them that they can maybe improve to detect this disease that maybe United States hospitals need to be doing? What tools are needed to detect this problem? How do we improve the system?

Virginia: We do it by what we’ve recognized for 75 years since the first study was done, these babies can be put under just an ophthalmoscope. The blood vessels can be appreciated as being abnormal and they have to have serial examinations. It’s very simple. This is not undergo a great surgery, bringing in all the world’s specialists, this is something that any pediatric ophthalmologist can do, and every pediatrician, every primary care doctor who sees a baby with a history of being premature or low birth weight should be immediately sent for screening. That’s what the American Academy of Pediatrics has long recommended. We’ve had treatment for at least 30 years and those treatments continue to be honed and improved. It’s something that should be done.

This is one of those very sad, preventable outcomes, which as you said, is devastating. For an infant to exist with very low visual acuity or no visual acuity at all is a tragedy. It ends up really costing society, more than just for that child, it affects everyone when we have these children needlessly blinded because of not getting the examinations and the treatment that they should be getting. It’s well within our reach.

Virginia: Oh, it would be right after those first well-care items where we check the baby’s height, and length, and head circumference, where we’re looking for very severe anomalies that need to be treated. This is one of those. It falls right under it. It really has to be a priority to every physician who takes care of a pediatric patient to get that prior history, whether the baby moves away, or grows, or the doctor changes, whatever happens, that they have a complete and accurate history of the prematurity or the low birth weight, so they know, their sense should be heightened to that risk existing in that child, and that they send the baby out for assessments. My own child has a coloboma and has to see a pediatric ophthalmologist. They also should.

Papantonio: One thing I read though is that mothers aren’t, there’s all types of things that mothers learn when they’re getting ready to give birth to a child. This isn’t something that’s really built well into that, that mothers should know more about to where they can take self-help measures to say, ‘Doc, I know you’re doing your job, but gee wiz, did you check this out?’ Isn’t that the kind of thing, don’t you find sometimes that the patients are too slow to ask the doctor and say to the doctor, ‘What about this?’ In this situation, don’t you think the mother has to know and this has to be talked about prior to the time of the birth? What’s your take on that?

Virginia: Absolutely. I agree. You can be the very best advocate for your child and yourself. We all encourage, certainly in the work that I do, that we as consumers have to be proactive. We should ask those questions. Things get missed, we get shuffled about, we deal with other people taking a history, and the doctor doesn’t appreciate the problem, and we certainly should ask, and we should keep asking because this is not a one time assessment. Once you’re born prematurely, you have to have serial evaluations done.

Papantonio: Yeah, let me close with this. I know you’ve given speeches on this. Patients have to ask questions of their doctor. Sometimes they’re afraid to do that. There’s this notion in our culture that the doctor knows everything. Well, a patient has to take some self-help measures, this is one of them. Virginia, thank you for joining me. I appreciate it.