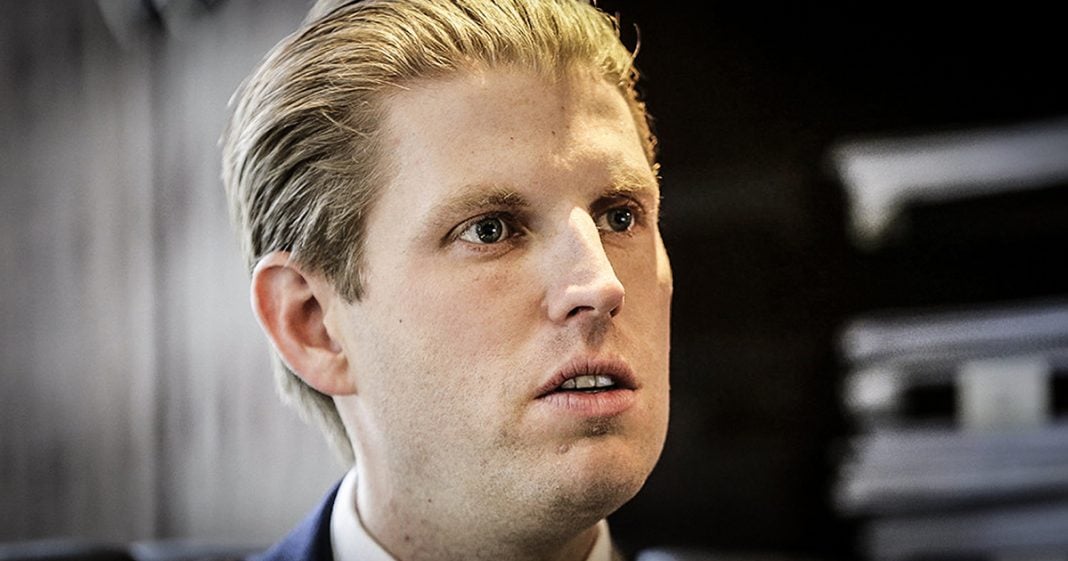 During an interview with Forbes that appeared online this week, Eric Trump admitted that nepotism got him where he is in life because of nepotism, but he swears that he’s great at what he does.  After all, Eric tells us that daddy would have fired him long ago if he weren’t amazing at business. Ring of Fire’s Farron Cousins discusses this.

Eric Trump, the son of President Donald Trump, actually admitted something fairly truthful in a recent interview with Forbes. The interview was conducted in February. It was posted online this past week, and in it Eric Trump actually admits that nepotism did help to get him where he is in life. So far that is probably one of the most self-aware statements we have heard from anyone inside of the Trump family. Even if it’s only just a sliver of self-awareness, Eric Trump does appear to have it, but here’s the thing. Eric Trump followed up his statement that nepotism got me to where I am by saying that, “Look, I’m clearly very good at what I do, or else my father wouldn’t have kept me around in the business.” Meaning that yeah, if Eric Trump was bad at his job his dad would’ve obviously fired his son because he doesn’t trust him enough.

Eric went on to mention the fact that four years ago his dad probably wouldn’t have trusted him and his brother, Donald Jr., to run the family business, and certainly wouldn’t have trusted them eight years ago. I’m not exactly sure what that means, why they were so untrustworthy four years ago and what made them so trustworthy today, but I do know that nepotism is not something you should ever be proud of, Eric. As the saying goes, this is a guy who was born on third base but clearly thinks that he hit a triple. There is nothing spectacular about Eric Trump that would in any way indicate that he is great at his job.

Now, he’s done some work for I believe St. Jude’s Children’s Hospital, helped raise some money for them. That’s a good thing. I’m sure he probably got a massive tax write-off for doing that, and he fully supports his father’s plan to ban refugees from coming in to the United States, from banning Mexicans to coming in to the United States, from cutting the budget for children here in the United States, so yeah, really not a standup kind of guy, so I’m not going to give him too much credit for using a charity as a tax write-off. That’s not exactly how this works.

What we do know is that Eric Trump is absolutely right. Nepotism in the United States counts for a lot, because had he not been born Donald Trump’s son, he would not have been given any of the opportunities that he has been given in life. That’s the difference. You know, good at his job, bad at his job, whatever. The fact is, he wouldn’t have had those opportunities had he not been Donald Trump’s son, a reality that the majority of people in this country live with every day. I guarantee you there are people out there smarter, harder working, and basically more ethical than Eric Trump that would do a much better job of running Trump Industries. Unfortunately, they’ll never get the chance because they came out of the wrong set of genitals, and that’s how it works in the United States.

Eric Trump is exhibit A as to what’s wrong with the United States economy, what’s wrong with the United States job system. It goes to unqualified people simply because of who they were born from, and that’s not fair to the rest of us. That’s not fair to people who are smarter, and harder working, and more ethical than the Trump family. These people will never get those opportunities, but guys like Eric, guys like Donald Jr., and even little Barron, born billionaires given every opportunity in life have no idea what struggle is like. Yet, they have the audacity to come out there and tell us, “No, no, no. Trust me, I’m a really good person.”