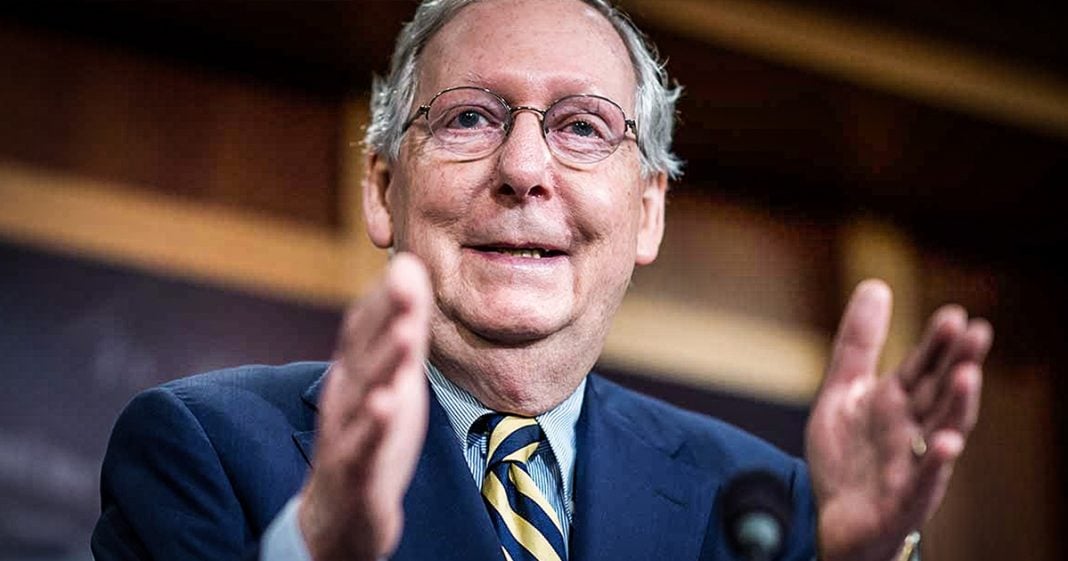 All acts of war must first be approved by Congress, according to the United States Constitution.  But Senate Majority Leader Mitch McConnell assures us that Donald Trump doesn’t need Congressional approval to bomb whoever he wants to in the world. Ring of Fire’s Farron Cousins discusses this.

Senate Majority Leader Mitch McConnell told us on Friday that, “Do not worry about it, Donald Trump does not need Congressional approval to launch these air strikes in Syria.” According to McConnell, legislation signed prior to the Iraq invasion in 2001 and 2002, basically lets the President do whatever the hell they want without any kind of Congressional approval, so Mitch McConnell says, “Donald Trump go ahead load up your guns and tanks and bombs, do whatever you want, we don’t need to be looking over your shoulder.” That’s just how American foreign policy’s going to work now.

Let’s put this another way. We still don’t know the final, I guess, death toll of Donald Trump’s air strikes in Syria, but here’s one thing we do know. According to Jeremy Scahill from The Intercept, in the month of March, Donald Trump’s air strikes that did not require Congress’s approval, killed more than 1,000 civilians in the Middle East, and we’re over here attacking Assad for killing what? 80 people that we know of, possibly more. But was it upwards of a thousand? Or more than a thousand? Because that’s how many Donald Trump’s airstrikes killed in the Middle East in the month of March. One month! More than 1,000 people, and Mitch McConnell’s out there telling us that he can do this whenever he wants, without any fear of Congress coming after him for not getting approval?

Is that how the United States works now? Is that how it’s supposed to work? Is that what this legislation you signed back in 2002 authorizes? The power you gave to George W. Bush, the power continued by Barack Obama, and now the power abused by Donald Trump.

We are killing people all over the globe right now. And we somehow think we have the moral high ground when we go attack somebody who attacked his own people? We’re doing the same thing folks, and I know those images of the children from Syria on our television screens is horrific. You know we have a lot of people in the United States up in arms saying that this is atrocious and we have to do something.

We have to do something about the carnage that we as a country are causing all over the globe. We have to do something about the fact that Donald Trump can make a phone call and order bombs to be deployed killing a thousand civilians. That’s what we’re looking at now. We can’t feign outrage over the fact that Assad killed 80 people, when we killed a thousand. You know, we have to have some self-awareness as a country here, we have to understand that we’re not always the good guys, you know I think it’s been quite a while since the United States has acted as the good guys overseas. And what Donald Trump is doing should be considered unconstitutional, but as long as we have spineless leaders like Mitch McConnell in the Senate, and Paul Ryan in the House of Representatives, they’re not going to do anything to rein in Donald Trump’s power. We’re going to see more air strikes, and that is exactly what Republicans and apparently a helluva lot of Democrats want to see in the coming weeks and months.