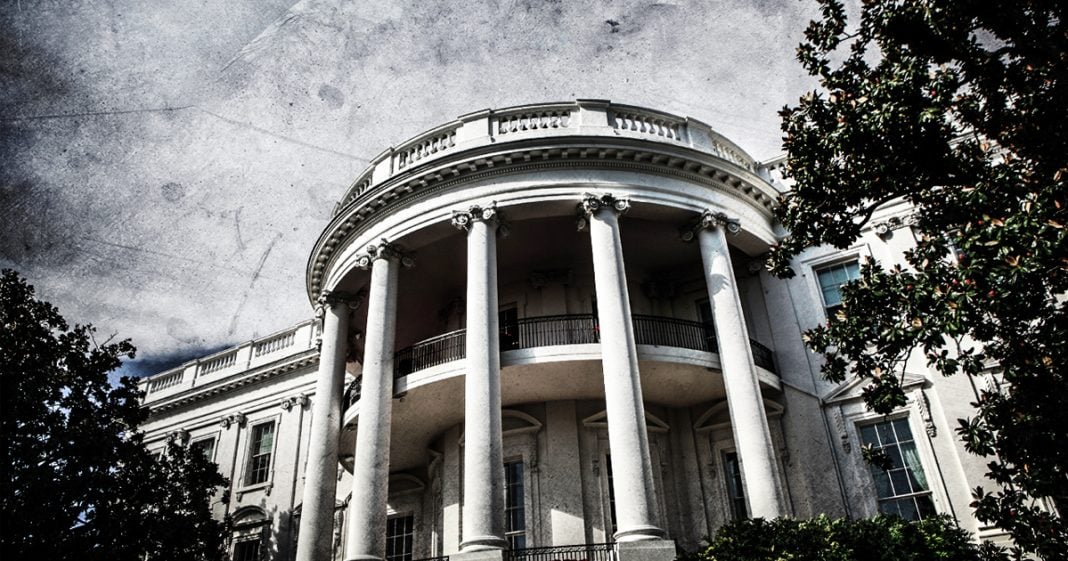 The White House has installed aids to act as Donald Trump’s eyes and ears to make sure they are “loyal” to him. Staffers are now even afraid to bring their cellphones to work. Ring of Fire’s Sam Seder and Farron Cousins talk about the issues going on inside of Trump’s White House.

Sam: So, Farron, of course there’s more to this week than just the Gorsuch hearings, and the Comey hearings, and the Republicans’ attempt to take away healthcare from millions and millions of Americans. There’s still actually an attempt at the Administration, at the White House, to I guess arguably run a government, but it looks pretty strange.

Farron: What’s interesting is that nobody in the White House right now, not Trump, not the aides or advisors or the staffers, nobody trusts one another right now in that Donald Trump White House.

There was an interesting story that came out from Politico about a week and a half ago where they talked about the fact that you have staffers that are now afraid to even bring in their cell phones to work, because they don’t want people going though them. They don’t want, I guess, Sean Spicer looking at them. This was in response … They wanted to find out who the leakers were.

Well then this past week, Washington Post comes out and says that the White House has decided to install aides, senior Trump aides, at all of the Cabinet levels of government to act as his, quote, “eyes and ears” within those organizations.

What they’re trying to do … I don’t think this is so much about catching leakers at this point. This is about making sure that everybody is loyal to Donald Trump, that they’re not saying anything bad about him in the hallway, that they’re completely loyal.

This goes along with the fact that … Again, another story from a couple of weeks ago, they were going through Facebook feeds of potential employees, people who had applied for jobs in the White House, making sure that they had never written anything unpleasant or unflattering about Donald Trump … You know? In case they were somebody from the Cruz campaign or the Jeb Bush campaign, they were weeding those people out if they ever said anything bad about Trump.

This is a man so narcissistic that he’s crippling the government from the inside because they can’t find enough people willing to work for him who’ve never criticized him. That’s one of the biggest issues that we have from inside the actual government, other than obviously being investigated for everything under the sun, is the fact that nobody wants to work with this guy. Nobody trusts themselves, or trusts him enough, to work for him. He doesn’t trust them.

Look. The best word to describe this is not something I can say on the air without being bleeped out, but I think we understand exactly what kind of situation we’re dealing with inside of Trump’s White House right now. It is an absolute disaster at every single level.

Sam: Yeah. I think you can say “crap show.” The thing to be clear on here is … And there’s a couple of stories that are involved in this, just this one. The Trump Administration …. When a new Administration comes in there’s about 4,000 people that need to be staffed up, and hundreds upon hundreds of those are ones that need some type of perfunctory Senate approval. They need to be nominated, and so on.

Most of the top … Or I should say the Cabinet positions are filled, but in these agencies there is no middle management. There’s no upper management that has been filled here and some have speculated that this is not just incompetence, but it’s also there’s some design to it. I think it’s probably a combination of both incompetence and design because largely speaking the White House, the Trump Administration, doesn’t want functioning government agencies.

Steve Bannon spoke in front of CPAC, I don’t know, a couple of weeks ago, and said explicitly that ‘Our agenda is to deconstruct the administrative state.’ What you have is sort of like top management in these agencies, and then just people who are working, just civil servants who come in every day, but no way to communicate between those. Then these people … Some of them have been referred to as “beachhead appointments.”

ProPublica did a great piece on these people who are put in, ostensibly, for temporary positions. We don’t know, depending on which agency, who has authority and who doesn’t. Clearly these are basically people who are put in, like some type of counter-revolutionary guard, to report back to the White House, not just spying on the civil servants who are there but spying, like you say, on the people that Trump has appointed to be there to make sure that they’re doing their job.

Now understand just how unqualified these people are to be at these agencies. The only qualification is they have shown their loyalty to Trump. I don’t know if you ever saw that movie ‘Bob Roberts’ where Timothy Robins’ character is followed around by these somewhat crazed, would-be brown shirts; but that’s the type of people that we’re talking about who are put into these agencies with no expertise, but rather just an ability to spy on these people. I don’t know who they report to back at the White House. Maybe it’s Reince Priebus, or maybe one of … Uday and Qusay, when it comes to one of the Trumps. I mean, who knows at this point?

But this is what’s going on. It’s just a bizarre, almost banana-republic-style. We have reports this week: Ivanka Trump, who ostensibly has no job with the White House, is not only getting an office, not only getting security clearance, an ability to go in and out of these meetings … She says that she’s not obligated to follow ethics rules, but trust her that she’s going to. I mean, this is just … We’re watching sort of the pillaging and …

These stories don’t get much play, and it’s understandable as to why they wouldn’t, Farron, right? I mean, there’s … The FBI said that they’re investigating the president. This destruction of our government … I mean, if somebody was to step in tomorrow I think we could recover from this. But long-term, this is a real problem.

Farron: Well it really is. What’s interesting is that … Obviously, yeah, we have to focus on the big stories, we have to talk about the investigations, we have to talk about all of the nonsense that’s going on with the political appointments, and Gorsuch, and everything else. But even if we took away any sense of scandal, any investigation … Suppose Trump was operating without any baggage, nothing would still … I mean, you still wouldn’t get anything done because they are so incompetent and dysfunctional in there.

Sam: But I think that’s the point. I think the point here is there’s such hostility towards government within his Administration, and Trump himself has these autocratic tendencies where believes that what he says should just happen. Whether it’s ‘I don’t like courts ruling against me. I don’t know why I’ve got to go through these bureaucracies,’ and whatnot, I mean, this guy is an autocrat.

So you’re right. Even if we put aside all these major stories, there would be real problem here. Like I say, to a certain extent it’s by design. I mean, you don’t cut the IRS when you know you get a return for five or six dollars on every dollar you spend there …