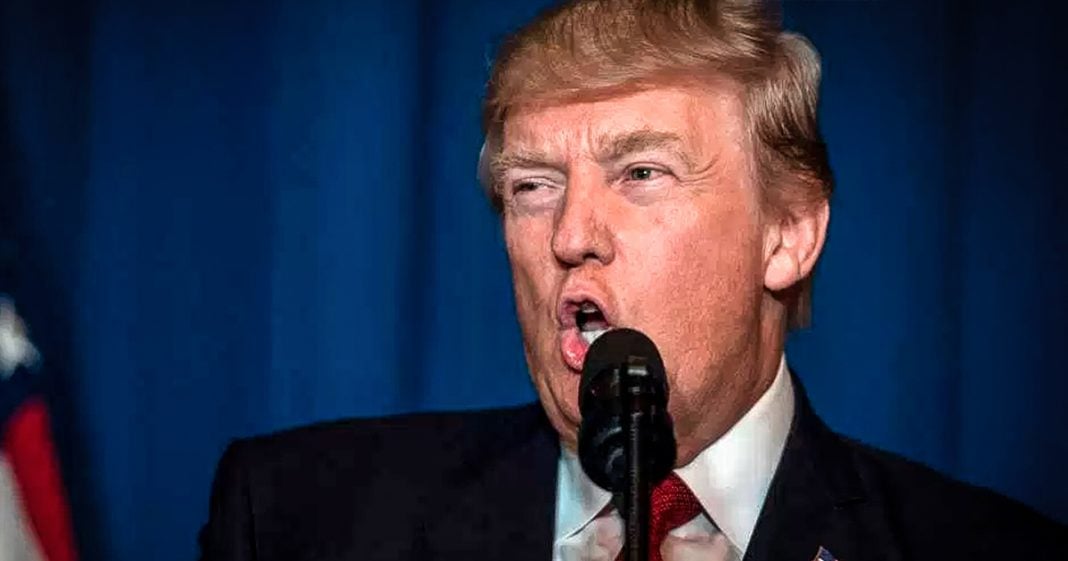 Late Thursday evening, Donald Trump approved a strike against an airbase in Syria, launching at least 59 Tomahawk missiles into the area.  The strike was not approved by Congress, and Trump himself begged President Obama in 2013 to stay out of Syria, but Donald went ahead with it anyway. Ring of Fire’s Farron Cousins discusses this.

On Thursday evening, from the comfort of his Florida, Mar a Lago Resort, Donald Trump authorized an air strike in Syria, where the United States launched at least 59 Tomahawk Missiles at an airbase controlled by President Bashar al-Assad of Syria. This also happens to be an air base where a lot of Syria’s Russian allies are located and the bombings did, in fact, kill a very high number of Russians, along with at least nine children, civilians. That number is likely going to rise as we continue to get reports of how many people were actually killed in these bombings.

Now these Tomahawk Missiles that we sent, 59 of them, each half a half-ton explosive capacity. So we effectively dropped close to 30 tons of explosive force on Syria on Thursday evening. From a President, who in 2013, went on a Twitter tirade against President Obama, telling him, “That bombing Syria, becoming involved in Syria, performing air strikes in Syria was foolish and that it was an expensive waste of time.” Apparently, four years later, Donald Trump has changed his tune and believes that it’s just fine to go ahead and launch massive missile strikes the approval of Congress, in an area loaded with civilians.

Now, don’t get me wrong. We saw 80 civilians murdered earlier this week in Syria from an attack from Assad, using illegal chemical weapons, and that obviously, is a horrible tragedy. Something needed to be done, but not this. Not a President acting unilaterally to launch 59 missiles and possibly kill just as many civilians as Assad did earlier this week. Again, we’re still waiting on the final death toll from this, but it’s unlikely, given the payload capacity of each one of these missiles, that 59 of them didn’t end up killing more than 80 civilians.

This was a stupid idea by Donald Trump. It was a horrible decision to go forward with this without the approval of Congress. Democratic Representative Ted Lieu specifically Tweeted out the fact that this is Unconstitutional. You have to get Congress’ approval in order to do this. The biggest problem with all of this is, obviously, the fact that Donald Trump has banned the United States from taking in Syrian refugees, Republicans who are crying about the fact that, “Oh, look what they did to the children over there.”

They don’t want those refugees coming into the United States, so what are we to do? Huh? These people want to flee a war-torn country and go somewhere, where they can live a peaceful life without having to worry about another country or their own country dropping a bomb on them in the middle of the night. Or, while they’re at school, but the United States, Donald Trump, the Republican party, said, “Oh, we’re really sorry. It’s real sad seeing footage of you on the news dead, but don’t come here. We don’t want you here. Instead, we’re just going to send a shit load of bombs your way and hope everything works itself out.”

That’s Republican foreign policy for you in a nutshell. That is what they believe. That is what they’ve done. And that is what’s happening right now in Syria, because of Donald Trump’s actions, because of Assad’s actions, and because of actions of Republicans here, in the United States. If we’re not going to open up our borders and take these people in to protect them, then we have no business going over there and making their lives exponentially worse.