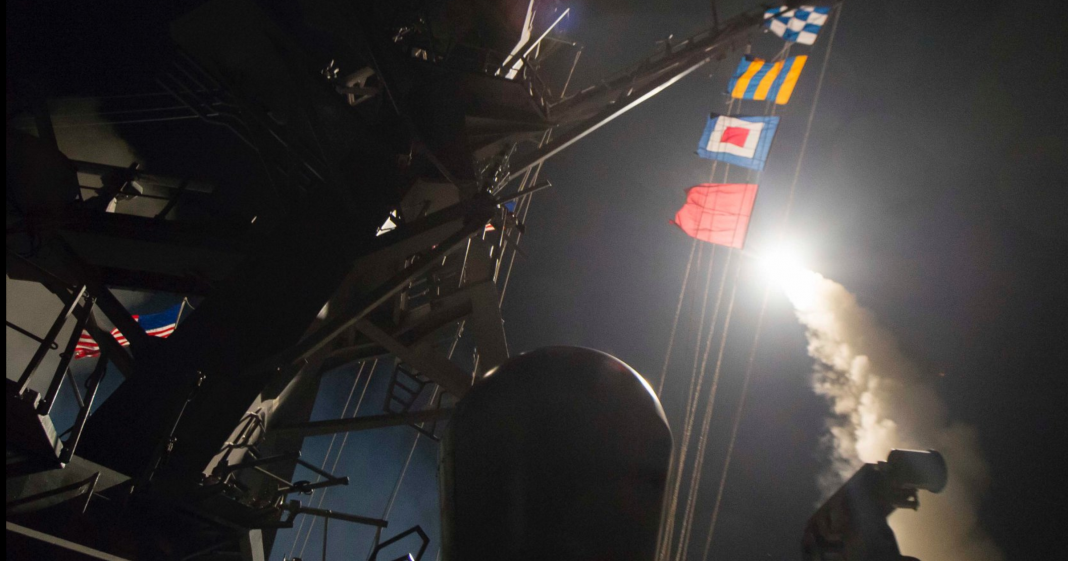 Thursday night, the United States launched 59 Tomahawk cruise missiles in an attack on Syria’s Shayrat Airfield. The strike was in retaliation for a chemical weapons attack on a rebel-held city that killed over 80 people, including many young children. Graphic video from the aftermath of the attack garnered widespread outrage. While Russia and Syria have condemned the US strike, most Western allies and war-hawks on both sides of the aisle have praised the President Trump for taking action.

Here’s video from the #Tomahawk launches against #Syria. For more on the story, visit https://t.co/2GprTQGGjs. pic.twitter.com/kB3gbBy4ma

Tuesday’s horrific chemical attack was seemingly tracked by the United States, with Western allies agreeing that the Syrian Air Force most likely carried out the assault with weaponized sarin gas. However Russia maintains that they knew nothing of the chemical attack and even suggested that the civilian casualties were the result of a rebel-held chemical weapons factory explosion. A spokesperson for President Putin claimed that “the Syrian army doesn’t have chemical weapons,” which had been “observed and confirmed by the Organization for the Prohibition of Chemical Weapons, a special UN unit.”

The US strike is in stark contrast to President Trump’s previously declared position on Syrian intervention. When President Obama was asking Congress to approve military action against Syria in 2013, Trump was highly critical.

If the U.S. attacks Syria and hits the wrong targets, killing civilians, there will be worldwide hell to pay. Stay away and fix broken U.S.

This strike was fairly limited in its scope, focusing on a single airfield. However, Secretary of State Rex Tillerson indicated that the US is not done in Syria. Saying that there is “no role” for Syrian President Bashar al-Assad, Tillerson also said “steps are underway” for the US to lead a regime change in Syria.

The conflict in Syria is a complex situation with several sides with many competing interests. This video from Vox does a fairly good job of describing the chaotic situation (story continues after video):

Removing Assad could threaten US diplomacy with Russia and Iran, while also leaving a vacuum of power in Syria. Experts believe that ISIS troops could take advantage of such a move and gain power in the country. Without full international support, a regime change could completely destabilize an already fragile Syria. Meanwhile, Russia is already reinforcing Syrian defenses and sending additional warships to the region. All-out war is on the horizon.

The military action comes at a time when Donald Trump was facing record low approval numbers. Immediately after the war with Iraq began, President George W. Bush enjoyed a 13-point leap in his approval rating. With the international press and lawmakers on both sides showering him with praise, you can be sure that President Trump will be looking for a similar bump. Trump knows all too well that war is a great way to gain favor in the polls:

Now that Obama’s poll numbers are in tailspin – watch for him to launch a strike in Libya or Iran.  He is desperate.

Thursday’s strike and the administration’s subsequent tone shows that the administration is carrying on the legacy of Democrats and Republicans who came before. We are once again actively engaged in empire building and violating the sovereignty of another country.

While the alleged chemical attack carried out by Assad is horrific, it pales in comparison to the atrocities that have been brought on by the American war machine. US airstrikes in Syria, Yemen, and Iraq have killed hundreds of civilians, including children. But for the last several weeks, the corporate media and politicians on both sides have been selling you on the need for war and now we have it. Democrats and Republicans alike couldn’t be happier.

This does need to be said https://t.co/AFugKPzRnc