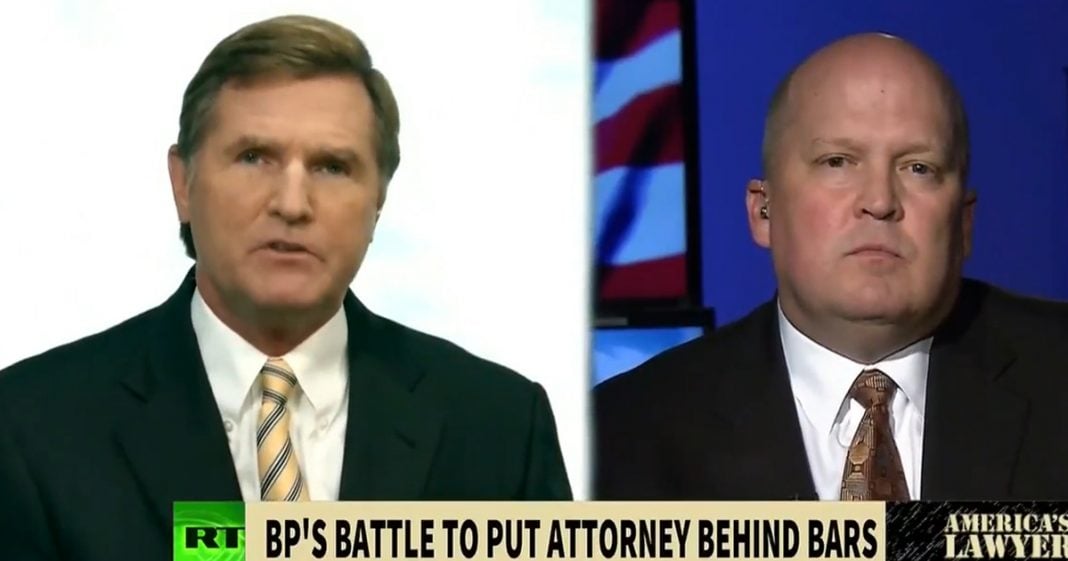 We’ve all heard the worn-out jokes about lawyers coming from comedians and politicians, and even our friends. They refer to lawyers as opportunistic ambulance chasers who are only out to make a quick buck off of someone else’s suffering. These comments aren’t as innocuous as you might think. In fact, they’re focused and developed as a highly financed, well-coordinated, decades-long smear campaign carried out by business interest groups like the U.S. Chamber of Commerce and the world’s biggest insurance corporations. Mike Papantonio, host of America’s Lawyer, discusses this with attorney Mikal Watts.

In 1971, Lewis Powell, before he became a justice on the United States Supreme Court, sent a memo to business and political leaders, where he outlined what he believed were the challenges facing the business community, coming from a group that he referred to as the New Leftists. During Powell’s entire career, as a matter of fact, as a lawyer and as a judge, he was a loyal, loyal servant to a system where the interest of corporations was always superior to the interest of consumers who were victimized by those corporations.

In this memo, Powell suggested that business groups, specifically the U.S. Chamber of Commerce, needed to come forward with direct campaigns in the media and by lobbying politicians to paint anti-corporatist groups like trial lawyers and consumer groups as enemies of democracy who are only out to serve themselves. By the 1980s, the campaign was well underway, and the U.S. Chamber of Commerce and the insurance industry was leading the charge to discredit and dehumanize and vilify trial lawyers because they were the only ones holding corporations accountable when they killed or crippled American consumers with defective products.

Sadly, the public was willing to buy into those lies. The Chamber of Commerce created a new department that they called the Institute for Legal Reform. This group was created to be the attack dog of big business and Republicans. Their only job was to go after trial lawyers for two reasons. The first reason was because businesses didn’t want to pay for their crimes. The second is because, at the time, trial lawyers were the largest donor group for the Democratic Party, a trend that’s only ended once Citizens United allowed Wall Street bankers to buy the loyalty of the Democrats.

Once the Chamber and their allies in the political world smeared the image of trial lawyers as a whole, they began to target specific attorneys and law firms. In a report issued by the Institute for Legal Reform in October of 2013, the group specifically listed law firms and individual lawyers who they believed posed the biggest threats to the profits, the profits of big business. The attacks from corporate interest groups and politicians took a sinister turn. In the last few years, they’ve provided just a small glimpse of what corporations really want to accomplish, and that is putting consumer trial lawyers behind bars. That leaves government regulatory agencies as dysfunctional as the FDA, as dysfunctional as the SEC and the EPA, to keep their eye on corporations and try to keep corporations honest. Then, of course, there’s America’s corporate media that today is fully owned and operated by huge corporate advertisers who threaten to pull billions of dollars in advertising from ABC and CBS and NBC if those corporate media types go too far in protecting consumers against corrupt corporations.

My guest tonight understands the attacks on trial lawyers better than anyone. He was targeted for prosecution for filing claims against oil giant BP after the Deepwater Horizon disaster. Thankfully, he was acquitted by a jury of all 66 counts brought against him by the federal government. Throughout the course of his trial, in which he represented himself, he proved that he was actually a victim of fraud himself. Joining me now to talk about this is attorney Mikal Watts. Mikal, take us right to the beginning of the story. What were you doing that made BP so angry, where the federal government actually sided up with BP, along with the U.S. Chamber of Commerce, in this fight?

Mikal Watts: Mike, I think it’s interesting that in the largest environmental disaster in American history, an oil spill that lasted 85 days and killed 11 good men, the United States Department of Justice did not succeed in convicting a single individual within BP for the crimes that led to that catastrophe. What it did do is it set up, in conjunction with BP, a fraud task force, where average citizens were hauled before courts all throughout the Gulf of Mexico and accused of submitting fraudulent claims against BP. Unfortunately, as part of that effort, our law firm got swept up in the middle of it within two weeks of the time that the trial was supposed to begin, so the timing was very suspicious.

Mike Papantonio: Yeah, it was well-planned. There’s no question BP … The ugly thing about this is that the U.S. government got so close to the wishes of BP, it became like a lapdog for BP in many ways. What did BP do to try to stop you from doing your job? How extensive was it even before you went to trial?

Mikal Watts: Where do I start, right? The bottom line is that about 360 different lawyers working together were putting together the evidence against BP and the fraud allocation trial where the judge was going to decide who was responsible for what percentage of the fault and who was liable for punitive damages. That trial was supposed to begin on February the 25th of 2013, and much to my shock, 17 days before, two of my offices were raided by the United States Secret Service.

There was an assistant United States prosecutor from the Southern District of Mississippi who traveled to Texas to oversee the raids. I was in Miami at the American Association of Justice Winter Convention and found out about it through frantic phone calls, frantic texts. We didn’t know what was happening. What I knew is that I was one of the primary lawyers that was supposed to take on BP in what was the trial of the century supposed to start 17 days later, and all of the sudden my offices got raided. It was a surprise, to say the least.

Mike Papantonio: Mikal, I can tell you, let me say this for you. You were regarded as one of the most effective trial lawyers on the team that was supposed to be …

Mikal Watts: I appreciate that.

Mike Papantonio: … trying the case against BP. You had taken the key depositions. You had hammered BP. You showed their criminal conduct. You showed 100 different ways that the feds should have thrown these corporate thugs in prison. Deposition after deposition, you showed that, so I have a hard time believing this was just a coincidence that all of a sudden BP talks the federal government into prosecuting you. Let me get to the good part of this story. You took them on, and you said, “Okay, you want a story? Let me try my own case in front of you in trial.” You tried the case in Mississippi. What were the results?

Mikal Watts: The results were as I predicted. We didn’t do anything wrong. We knew it from the start. It was a completely specious prosecution, what the motives were. It’s hard to even fathom that a United States attorney would try to wreck a law firm and the 140 people that work there with the scant evidence that they had. It helped that we didn’t do it. I felt that I was uniquely situated to defend myself, so I could talk to the jury every day about what was happening and extol the virtue of what mass tort lawyers like you and I do on a daily basis. I think that that helped get the jury behind what was going on in terms of what the goals were, and this case against BP was a righteous lawsuit.

Mike Papantonio: Mikal, one thing you did is you rocked the world of a federal prosecutor who routinely had set up for corporations versus trial lawyers. You weren’t the first one. This was not the first time a corporation talked the government into going after a trial lawyer. You rocked this guy’s world. I think he quit right after the case. Tell me about it.

Mikal Watts:
In terms of not being the first time, some of the most prominent trial lawyers in the United States … A gentleman and a friend of mine now, Paul Minor, who you knew well, in Mississippi was indicted and sentenced to 11 years for something that is beyond me that he did anything wrong. I think it was outrageous. The largest class-action lawyers in the country got prosecuted for things that, I don’t know, I didn’t see anything criminal there. Dickie Scruggs, everybody is prosecuted under the Bush administration.

Mike Papantonio: Mikal, I know you lived through the time when corporate America had the U.S. Chamber of Commerce, they had the biggest insurance companies in the world, that had this plan that they had focused for a decade how to go after trial lawyers. Then it finally evolved to one thing we’re going to do is, if it’s a trial lawyer going after a corporation, we’re going to figure out how to put that trial lawyer in prison. Let me ask you this. Out of this, if you were to give us your ideas about what needs to be reformed, I mean immediately, what do we need to do to change this scam type of prosecution that’s been taking place in the last 10 years?

Mikal Watts: The bottom line is it’s without doubt that for the last 40 years it has been a goal of the opponents of the Democratic Party to defund the party by going after trial lawyers, and that’s been a very conscientious, deliberate effort with $660 million of paid advertising designed to, in effect, affect juries before they sit. This phenomenon of criminalizing our politics, as has happened since Karl Rove took over the Bush White House in the early 2000s and going after trial lawyers criminally, is I guess now about 12 or 13 years old. It’s just shocking that this kind of thing could happen here in the United States.

To answer your question, there’s a lot of things that ought to be done. First, the entire federal criminal justice system is built upon the pressure that the government can put on individuals who cannot bear that pressure, getting people to roll over on people, to say things that aren’t true, to threaten witnesses. If they don’t do X, they don’t do Y, they’re going to get prosecuted along with them. Buy your peace by rolling over on someone else. We were able to show that that happened in our case, but there’s absolutely no consequence whatsoever to any United States attorney that brings charges, however specious, however false, however ridiculous as the charges against me were.

At the end of the day, I just got to go home, but there was no consequence on the prosecutor for leaking evidence to the press, for bringing false charges, for pressuring people, for putting their lives at jeopardy, just so that this guy could get a notch on his belt. It was wrong then. It’s wrong now. That needs to change. There needs to be a substantial process where the United States Department of Justice remembers that when its prosecutors take that oath, they’re swearing, not that they’re going to get every conviction, but that they’re going to do justice, and the goal is convictions.

Mike Papantonio: This is a prosecutor that probably should not have been around that long after we saw what he did in other cases. Mikal, thank you. Congratulations. Keep up the fight. I’m glad you’re out there.