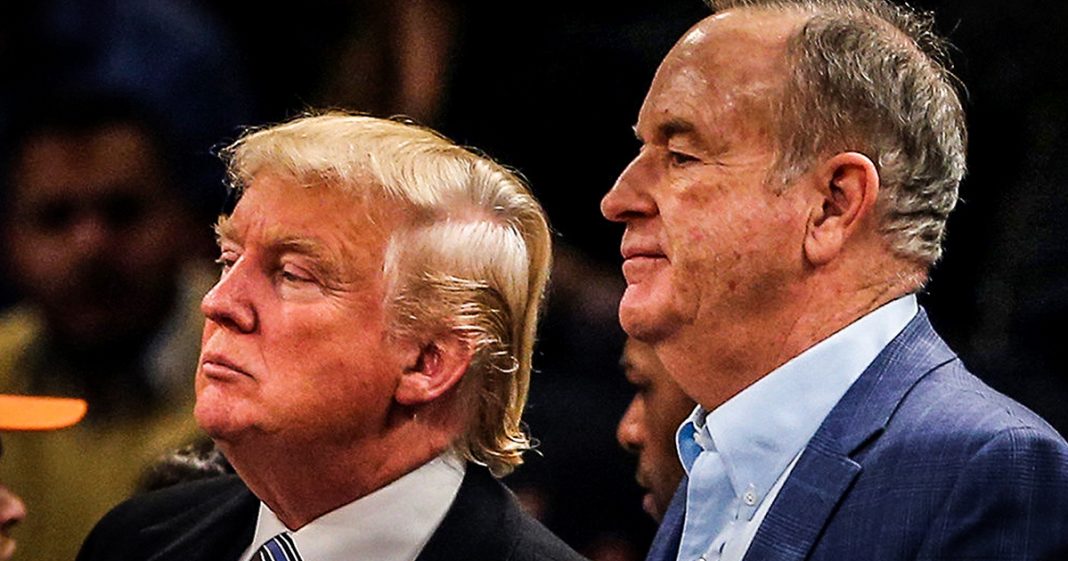 Donald Trump is now weighing in on the sexual harassment claims against Fox News personality Bill O’Reilly, saying that he knows Bill, he thinks he’s a great guy, and he probably didn’t do anything wrong in this situation. Ring of Fire’s Farron Cousins discusses this.

While most people in the United States have begun to realize that Bill O’Reilly is quite the scumbag, he at least has one person willing to come to his defense, and that person, not ironically, is President Donald Trump. According to an interview that Donald Trump did, he said that, “Look, I know Bill. I know Bill O’Reilly. He is a good guy. I do not believe that he did anything wrong. He probably didn’t do anything wrong.”

This is obviously in response to the numerous sexual harassment accusations against Bill O’Reilly that had been filed by several different women. So far, the network has, I believe, settled a couple of different cases, about three of them, for about $5 million. They’re paying millions of dollars to women who’ve been sexually harassed by Bill O’Reilly, and that’s just in recent years. The network is also facing sexual harassment allegations against other people at the network. They’re now facing racial discrimination accusations from people, facing lawsuits for that.

Yeah, it makes perfect sense for a guy like Donald Trump, who is literally the same kind of person as Bill O’Reilly, to come out there to his defense. I mean we all heard the audio of Donald Trump from the campaign talking about what he likes to do to women. Yeah, of course he’s going to defend Bill O’Reilly. No, in Trump’s mind, he didn’t do anything wrong because, to Donald Trump, sexual harassment, sexual assault is perfectly fine. There’s nothing wrong with that.

What Fox has to understand now is that they can continue to run this jackass on television with no advertisers, losing money on his multimillion-dollar a year contract, and face the possibility of women coming forward and actually suing the network for putting them into this hostile environment, knowing about Bill O’Reilly’s sexual harassment history, and still putting women in that kind of position, or they can finally pull the trigger and get rid of Bill O’Reilly from that network for good.

It’s time for him to retire. It’s time for him to go away. The only people that currently have that power are the executives at Fox News. They could end this today, if they chose to, but just like it happened in 2005, they assumed that the public’s going to forget, that the story’s eventually going to go blow over, advertisers are going to come back, Bill O’Reilly is going to be back on top.

Unfortunately, they’re probably right in this instance because, again, we’ve been talking about these allegations, these cases against Bill for 12 years, and, so far, Fox has failed to protect the women working at their network from this sexual predator. There’s no reason to believe that anything has changed at that network, and that they’re willing to get rid of Bill O’Reilly in order to protect these women.