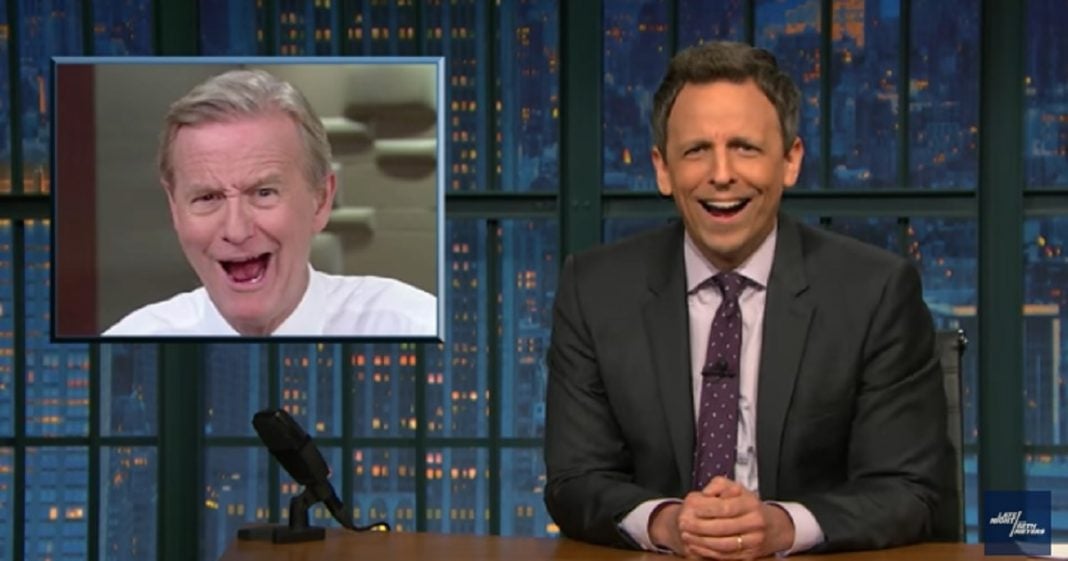 On “Late Night” this week, host Seth Meyers echoed the concerns of many in America when he compared the programming on conservative ‘news’ station Fox News to state-run television.

Considering how often President Trump tweets about his beloved Fox News, it’s clear to most anyone that the network is apparently handling the current administration with kid gloves.

Meyers comments came in response to the President’s unprompted defense of Fox host Bill O’Reilly from a slew of sexual harassment allegations. Meyers said that Trump’s kind words about O’Reilly was just the “latest example of the symbiotic relationship” between the President and his chosen network.

“It would make sense that Trump would trust “Fox and Friends” since they routinely give him sycophantic coverage . . . They give him glowing, unquestioning coverage, and in return, he gives them access. And they’ll go to absurd lengths to defend him.”

Meyers noted that Trump and Fox are so cozy that he regularly promotes the network and its shows on his active Twitter account.

“So Fox is basically the closest thing we have to State TV.”

Many in the media quickly learned that if they were not willing to bend over backward to compliment the POTUS, they would quickly be labeled “fake news.” This put some networks in a quandary, wondering if they could deliver news their viewers wanted while still having access to the president – sell out, or stand up.

For Fox News, the decision was a simple one – ignore Trump’s flaws indefinitely in order to try and gain the most cash from this administration as possible. From a network rampant with sexual harassment and misogyny, one couldn’t expect anything else.