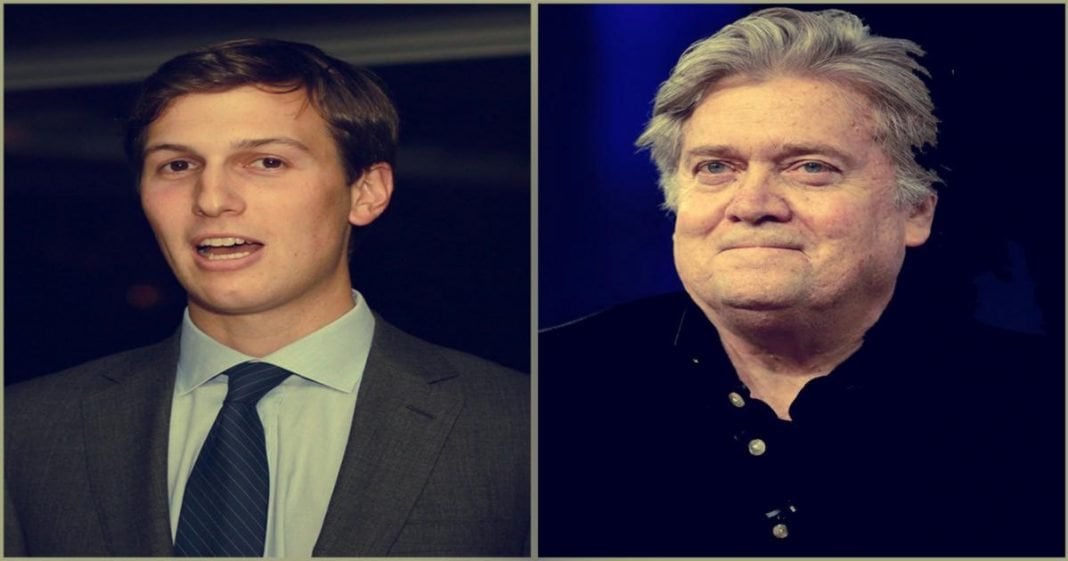 Multiple sources are pointing the finger at President Trump’s son-in-law Jared Kushner for Steve Bannon’s removal from the National Security Council. While Bannon has been removed from the NSC, he still remains one of President Trump’s top advisers, so the war with Kushner is far from over.

On Wednesday, Politico reported that Kushner expressed his frustrations with Bannon’s nationalist views to advisers in and out of the White House. The Politico story states that,

“Kushner, a onetime New York Democrat, and Bannon, a hard-right nationalist, have clashed as Kushner has told people that Bannon’s desire to deconstruct the government is hurting the president.”

Meanwhile, other Politico sources have said that Bannon was on the verge of resigning altogether, but was persuaded to stay in the White House by well-known Republican supporter, Rebekah Mercer. Politico says:

“Republican mega-donor Rebekah Mercer, a longtime Bannon confidante who became a prominent Trump supporter during the campaign, urged Bannon not to resign. ‘Rebekah Mercer prevailed upon him to stay,’ said one person familiar with the situation.

Another person familiar with the situation, a GOP operative who talks to Mercer, said: ‘Bekah tried to convince him that this is a long-term play.’”

The clash between Kushner and Bannon highlights the broader problem with Donald Trump’s desire to run the country largely on the advice of political outsiders. Without knowledge or experience in Washington’s bureaucratic constructs, the Trump White House has been extremely disorganized, has had trouble staying on message, and has been unable to gain necessary support from Congress. Seeing problems with Bannon’s lack of political chops, Trump merely caved to the demands of another political rookie.

While nepotism is indeed a massive concern, Kushner’s rise to power within the West Wing signals that President Trump is perhaps moving away from some of some of his more extreme nationalist views. That said, with Kushner you are simply trading one set of problems for another. Among a myriad of other concerns, Kushner is also incredibly inexperienced in policy, yet has seemingly taken the role of a “shadow Secretary of State.” Amy Davidson of The New Yorker asked in a column on Tuesday:

“Is the question whether Trump really thinks that Kushner has the competence and the ability to manage the portfolio he has dreamed up for him—bringing peace to the Middle East; monitoring the fight against isis; overhauling the federal government; serving as an intermediary with China, Saudi Arabia, Mexico, and even Canada—or whether he even thinks that competence matters?”

That said, it is undoubtedly great news that the US no longer has Bannon sitting at the table where matters of national security and major foreign policy is discussed. After all, Bannon did say in an interview: