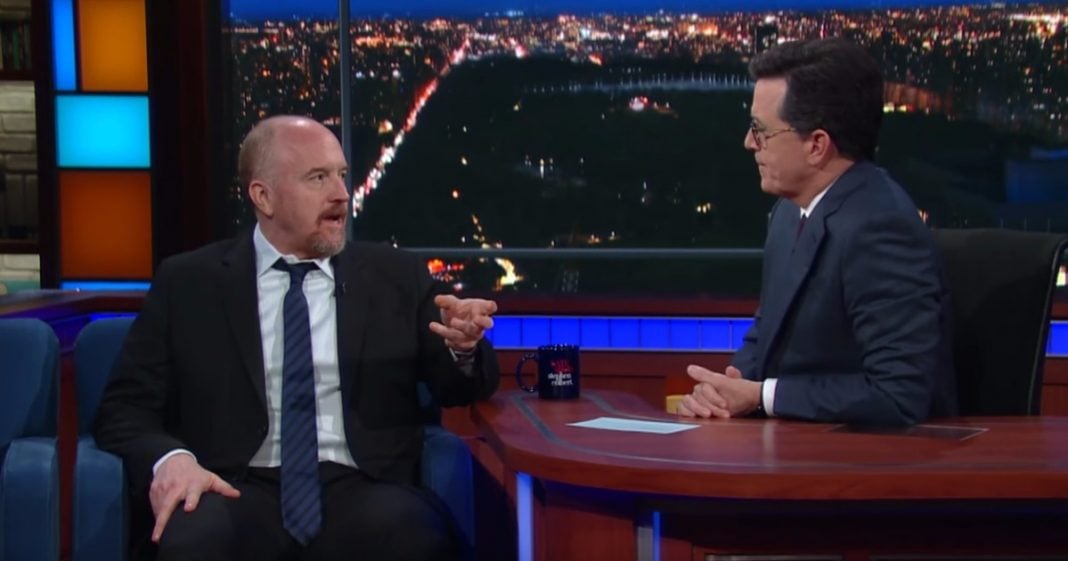 Comedian Louis C.K. straddled the political sphere in the last election, alternating between silence, condemnation, and apology. Remaining mostly out of the public eye, C.K. wrote his opinions on the presidential elections in newsletters to fans.

Unlike many other prominent celebrities though, C.K. elected not to take action against the candidate he clearly opposed. Now, the comedian has come out again – this time while talking to late-night host Stephen Colbert – to condemn President Trump.

In his usual style, C.K.’s commentary on the POTUS was both vulgar and insightful, saying that he was a “lying sack of shit,” but also chastising those who allowed his presidency to occur.

C.K. explained that there are many different types of people when it comes to lying. Some just lie once, some lie occasionally, some are just “liars,” and some, like the President, are “lying sacks of shit.”

He’s just a gross, crook, dirty, rotten, lying sack of shit. And that’s not a courageous position in this room.”

C.K. is correct that his viewpoint is not a controversial one, which is probably why he was reluctant to share it in the first place, treasuring a more unique perspective. Still, when just 34% of America approves of a president, it’s hard to stay silent.

The comedian also couldn’t stay silent on how he viewed those who didn’t vote because they didn’t approve of Clinton.

But voting isn’t something you do because you want to. You don’t look at it like, what do I want, what do I feel? … What will happen if I don’t? That’s called being an adult.”