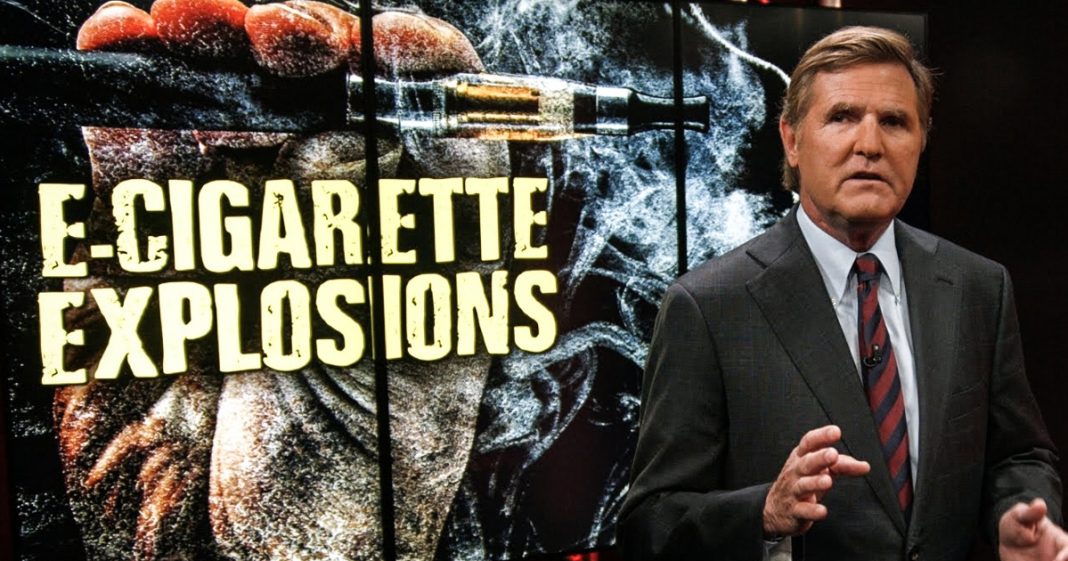 Lawsuits are being filed against the manufacturers of e-cigarettes because the lithium-ion batteries in the devices have been known to explode during normal operation and during the charging of the batteries, causing severe burns to users and property damage. Mike Papantonio discusses these dangers.

Learn more about the dangers of e-cigarettes here.

E-cigarettes are devices designed to deliver nicotine to the user without ever having to light up a conventional cigarette.

These devices were first patented in 2003, and have been available for sale in the U.S. since 2007. Manufacturers of these products advertise them as safer than traditional forms of smoking, and as a way to actually quit smoking.

Right now, the jury is still out on the long-term health effects from e-cigarettes. Recent studies have shown a link between the use of e-cigarettes and bronchiolitis obliterans, a very serious and irreversible lung disease, known as “popcorn lung.” The lung disease is caused because many e-cigarettes are flavored with diacetyl. When this chemical is inhaled, it can cause scarring of the air sacs in the lungs resulting in the thickening and narrowing of the airways.

Symptoms of popcorn lung include coughing, wheezing and shortness of breath, similar to the symptoms of COPD.

But what we’re focusing on today are the lawsuits being filed against the manufacturers of e-cigarettes because the lithium-ion batteries in the devices have been known to explode during normal operation and during the charging of the batteries, causing severe burns to users and property damage.

Most of the fires with e-cigarettes occur while the device is being charged in a USB port. The problem stems from the fact that different USB ports put out different levels of voltage and current, which can cause the battery in the e-cigarette to overheat. This overheating triggers a reaction that has been called “thermal runaway,” and once this reaction begins, there is nothing that can be done to stop it.  This thermal runaway creates a super heated explosion that immediately cause second or third degree burns to a victim, and in some cases has resulted in bone fractures, muscle damage, and loss of eyesight.

And you need to understand that these aren’t just small sparks or minor battery glitches – these are full throttle explosions.  According to a report by FEMA in late 2014, these devices, due to the way that they are shaped and designed, essentially become missiles with an explosive impact.  The document states e-cigarettes are “more likely than other products with lithium-ion batteries to behave like ‘flaming rockets’ when a battery fails.”

And just like real rockets and missiles, the explosions created by these e-cigarette batteries can be devastating.

In 2012, a man in Florida had an e-cigarette explode in his mouth, shattering most of his teeth and blowing off a portion of his tongue.

In December 2016, an e-cigarette device exploded in a man’s pocket while riding a bus in California.  The explosion caused third degree burns on the man’s leg and he had to be rushed to the emergency room.

Also in December, a man from Stratford, Connecticut had a device explode while it was in his mouth.  The explosion knocked two of the man’s teeth out, caused severe damage to two other teeth, and left him with burns on his hand.  Witnesses claimed that the device exploded and then sailed about 20 feet across the room.

In January of this year, an Idaho man named Andrew Hall had an e-cigarette device blow up while in use, knocking out seven of his teeth, leaving 2nd degree burns on his face, and shattering part of his bathroom sink when the exploding device flew onto his counter.

The FDA has documented more than 130 incidents of e-cigarette battery explosions since these devices were brought onto the market. Unfortunately, it was not until 2016 that the FDA even acquired the authority to regulate these devices. And formal science-based public hearings are not set to even begin until April 2017.

This problem will only become worse, as the use of these devices continues to grow.  More than 3 million middle and high school students used e-cigarettes in 2015, making these devices the most utilized tobacco products among kids. A CDC report from 2014 (PAGE 2), the most recent year that we have data available, more than 9 million adults in the United States regularly use e-cigarettes.  The growing use can be attributed to both the number of people using the devices to quit smoking traditional tobacco, and to the aggressive marketing campaigns that Big Tobacco is using to sell e-cigarettes.  And yes, you heard that right – Big Tobacco companies own a large share of the companies that produce these devices – They began investing and buying them out once they saw that e-cigarettes were cutting into the profits of their traditional tobacco products.

Learn more about the dangers of e-cigarettes here.