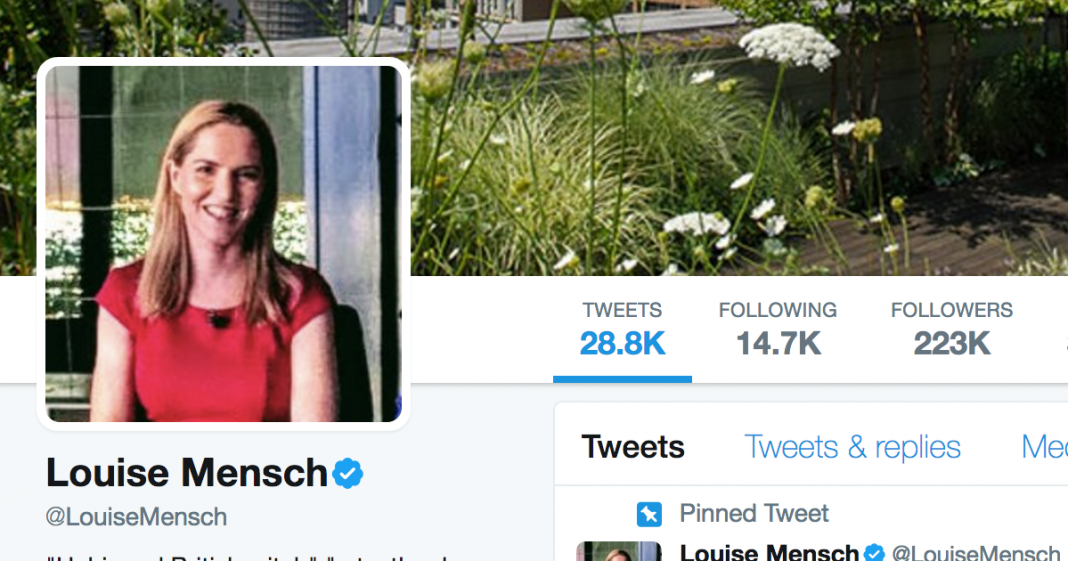 Seemingly, you can go from author, to Conservative member of British Parliament, to crazed conspiracy theorist, to media darling rather quickly; just ask Louise Mensch.

Mensch has taken the Donald Trump-esque approach of tweeting outlandish claims, then when confronted about their accuracy, stating that her tweets merely reflect her beliefs, not actual fact. This has had the puzzling effect of somehow catapulting her to corporate media-propelled stardom.

Some of her claims include tweeting that Vladimir Putin murdered Andrew Breitbart, that the 15-year-old that was sexting with Anthony Weiner was actually a Russian hacker, and that Russia was backing both Bernie Sanders and Donald Trump in the 2016 elections. She has also accused a laundry list of people and websites of being “Russian shills”: Jeff Sessions, Rudy Giuliani, James Kallstrom, Glenn Greenwald, FBI agents in New York, ProRepublica, and Democracy Now!

Normally, someone like Mensch would be allowed to court her own cult of equally disturbed followers on social media and be ignored by the general public. However, the corporate media is desperate for Russia-based gossip, so they have latched on to Mensch as some sort of hero.

Whether it is MSNBC, the New York Times, or HBO’s “Real Time with Bill Maher,” the media has not only legitimized the conspiracies of Louise Mensch, they have given her a massive platform. Now, people like Donna Brazile and Harvard’s Laurence Tribe are lauding Mensch for her work. Their followers are quick to join in on the praise-o-thon of Mensch’s journalism.

Thank you for good journalism. https://t.co/0qtqD4u1Nu

Though, not everyone is in on the Louise Mensch love fest. Fairness & Accuracy In Reporting (FAIR) did a nice job of detailing Mensch’s unhinged views last month. Likewise, Monday’s must-read article from Matt Taibbi in Rolling Stone is an excellent look into the media’s ravenous appetite for Russian conspiracies. Taibbi says that actual evidence is secondary to our belief in a massive Russian-Trump plot:

“But when it comes to Trump-Putin collusion, we’re still waiting for the confirmation. As Democratic congresswoman Maxine Waters put it, the proof is increasingly understood to be the thing we find later, as in, “If we do the investigations, we will find the connections.”

But on the mass hysteria front, we already have evidence enough to fill a dozen books. And if it doesn’t freak you out, it probably should.”

Even Mensch herself seems to know that she is simply an internet troll. In an interview with the Times of London, she said:

We despise Trump so much and have invested so heavily in the Russian collusion story, that we will go to extraordinary lengths to maintain it, even if it means listening to someone that believes President Obama should have bombed Russia to “show Putin what alpha means.”