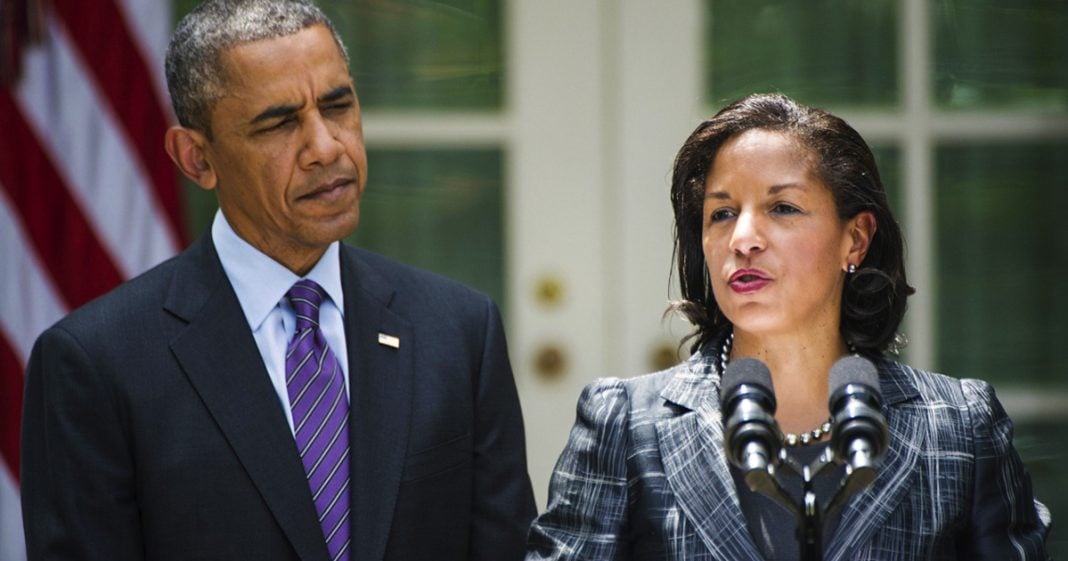 Republicans are ignoring any wrongdoing on Trump’s part and Democrats are completely underwhelmed that somehow Obama’s National Security Advisor participated in a political hit job. Here’s what we know – we know that Susan Rice ordered DOZENS of names – spreadsheets of unmasked names on calls that contained zero illegal content or represented zero illegal acts. Ring of Fire’s Josh Gay discusses why the people deserve for Susan Rice to testify under oath.

Republicans are ignoring any wrongdoing on Trump’s part and Democrats are completely underwhelmed that somehow Obama’s National Security Advisor participated in a political hit job.

Here’s what we know – we know that Susan Rice ordered DOZENS of names – spreadsheets of unmasked names on calls that contained zero illegal content or represented zero illegal acts.

We also know that information from these spreadsheets and from top secret reports leaked to the press – like the actual content of a conversation between Michael Flynn and a Russian ambassador. Rice’s requests were not illegal – a massive overreach – but not illegal. Be we do know that allowing that information to get to the press is a felony. Either Rice leaked the information, or she was extremely careless with items of national security. Neither of which will help me sleep better at night.

We also know that so far, no evidence has been brought forth that Trump or his team colluded with the Russians. Schiff has said this and even Chelsea Clinton has admitted as such. But, Rice says that because of the overwhelming evidence that was quickly pouring in, she HAD to unmask these names.

We also now know that the Rice information is what Devin Nunes went to the White House to obtain, as the Susan Rice logs could likely only be accessed by someone in the executive branch. Sharing that information with Trump and not the rest of the investigation is a serious problem for Nunes, but doesn’t erase the ills of Susan Rice.

Which all of this raises another major question – what did Obama know about all of this and who did he share it with, what did he order? We know that he publicly announced the investigation – we know that the executive staff RUSHED to spread information as far as they could before Trump took office. So, he knew SOMETHING.

You know, it was easier to accept that the President was insulated from the actions of an out of control spy industry. Gosh, the NSA and FBI have someone leaking info to the press. But, knowing that a key advisor to Obama was personally involved in politically motivated spying, that raises a lot more eyebrows. We need answers – He either had a SHOCKING lack of oversight over his closest advisors or he was complicit in this political hit job.

Now, I’m not defending Trump’s team’s actions – if Flynn or someone else did something wrong, let’s get to the bottom of it and hold them accountable. Flynn asking for immunity is a really bad sign. Likely, Congress has SOMETHING on him – taxes or that he lied under oath and they are looking to use that to pressure him into revealing something else.

But, in the same way, we MUST get answers from Susan Rice – we have to have her testify – under oath – not simply to a friendly press – about her actions and what President Obama knew. If you listen to Adam Schiff, the Trump-Russia connection MUST be true. Well, with our evidence now – if you played the Schiff role, you could easily connect the dots to reveal something akin to Watergate from the Susan Rice scandal.

Think about that story for a moment: The Democratic party loses an election, can’t believe it, can’t get over it – and yes emails were hacked, so the outgoing President orders an investigation. In that investigation, the National Security Advisor abused her power to collect damaging POLITICAL information – and then somehow that information illegally leaked to the press. That’s a really serious issue. That’s where this thing COULD go.

Plenty of you have jumped to the conclusion that Trump and Russia had to have done something wrong – there’s “a lot of smoke” – right? And yeah – there certainly has been a TON of smoke. But, we really should do the same here. There is a big ol’ cloud billowing from the Obama White House.

Of course, Susan Rice jumped on MSNBC to defend her acts. She is saying that she leaked nothing, but that information had to come from somewhere. She also claims that she acted because of the massive amounts of evidence she saw regarding Russia’s role in the election and Trump’s transition team ties to that. Of course, the Congressional investigation hasn’t found ANY of that evidence. Susan Rice even refused to answer whether or not she would testify – MSNBC’s Andrea Mitchell didn’t follow up.

Look, I don’t care how much you hate Trump, I don’t care what side you are on, or how much you want the Republican party to burn to the ground – we must demand accountability from our officials, regardless of their political leanings. Trump is awful, the GOP-led Congress is inept. But, that doesn’t mean the Democrats are saints. I personally think that both sides did some pretty dirty and potentially illegal things in the last 12 months – and we DESERVE WAY BETTER – we deserve the truth.

I frankly don’t care which party did what – I want them ALL held accountable. I don’t want any of our elected officials and their appointees to be able to skate by after using the spook industry to gain some additional political footing. Susan Rice MUST testify under oath. We deserve that much. If Susan Rice or President Obama did nothing illegal, then give us your evidence, testify and let’s move on. Likewise, if the Trump team did nothing wrong, then we’ve got to get over it. Until then, we’ve got to hold EVERYONE’S feet to the fire.