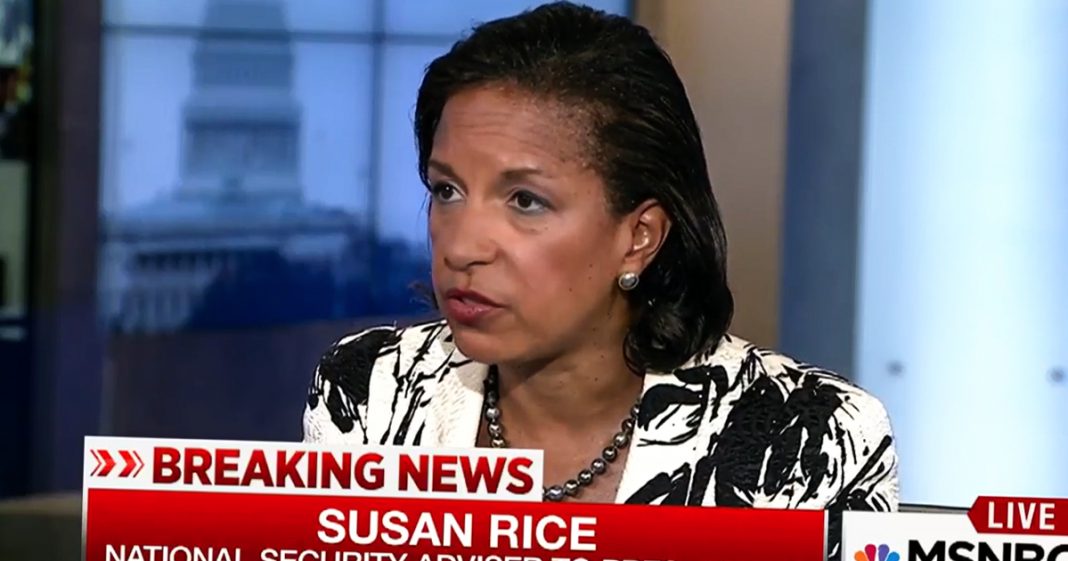 This Susan Rice story is a Real story – real crimes – real misconduct coming from the White House and the media is choosing to ignore it, calling it “fake.” This made-for-TV drama couldn’t get any more nuts – but the outcome is already predetermined, depending on which team you support. Ring of Fire’s Josh Gay discusses this.

Watching the media, you wouldn’t know this Susan Rice story is a real story, but it is a real story – real crimes – real misconduct coming from the White House and the media is choosing to ignore it, calling it “fake.”

This made-for-TV drama couldn’t get any more nuts – but the outcome is already predetermined, depending on which team you support.

What you believe and which dots you choose to connect depend greatly on which publications you read. If you read the New York Times, which SAT on the Susan Rice story, then Russia MUST have worked with President Trump to defeat Hillary. Of course if you read something like Breitbart, Trump is some angel and all of his associates are innocent of all wrongdoing.

As of Tuesday morning, the mainstream media has whitewashed this Susan Rice story. ABC news has a story about Carter Page being recruited by Russian spies – nothing about Rice. The Washington Post is talking about Erik Prince allegations, who was NOT even part of Trump’s transition team, not Rice. CNN has 4 pieces on Bill O’Reilly and only one headline about the Rice issue – “Sources: Unmasking claim is false” – CNN’s Don Lemon called the story fake – and encouraged his viewers to IGNORE all coverage regarding the matter. MSNBC’s Rachel Maddow, which turned two pages of Trump’s tax returns into a primetime special – is doing a story on how Trump MIGHT BE USING THE National Security Council for political gains. THIS IS THE SAME THING THAT WE HAVE PROOF OF WITH SUSAN RICE. Not speculation, we have PROOF. The media is literally telling you to pick a side and ignore facts.

When Susan Rice went on Andrea Mitchell’s show Tuesday – she was asked more questions about Russia, Michael Flynn and Donald Trump – than she was of her own actions. Mitchell lead Rice down a line of questioning that made her seem completely innocent. Rice was up to slam Russia and slide out of her own wrongdoing. Rice wouldn’t even answer if she would testify if called – and Mitchell didn’t follow up, instead asking Rice about Republicans saying mean things. You have someone implicated in a major scandal and MSNBC used the opportunity to play political patty-cake.

We need to ask a question – as Joe Scarborough did on his show – “What if Dick Chaney did this to Obama?” Would that anger you? Would the Democratic darlings, MSNBC or CNN play softball? I know it would have been front page news for DAYS.

Instead, because we don’t like Trump – we are allowing the Obama White House to get away with anything.

Heck, there are people calling Susan Rice a PATRIOT. Because somehow we don’t care if someone breaks the law, or abuses power. We just want our team to win. I fail to see the logic that because Trump is awful then Democrats are infallible. I fail to see how John Podesta falling into a Phishing scheme and having his emails hacked justifies THE WHITE HOUSE SPYING ON POLITICAL FOES. And I fail to see how the media will run with a story about Trump’s ties to Russia, but won’t touch this story!

But, the fact that you are willing to forgive the sins of one side and take up pitchforks for the sins on the other side show that you don’t care about the crime. You don’t care what actually transpired. You only want your team to win.

When you talk to an irrational sports fan, they’ll always tell you that the only reason they ever lost is because of the refs or because the other team cheated. Well, the same goes for politics. The problem is that corporate media is even more fanatical than the public. There is this love affair with the establishment wing of the Democrats and the press will do ANYTHING to protect them.

If BOTH sides were wrong, if BOTH side did something illegal, we deserve to know and we deserve justice. Instead, we are just fed garbage, absolute garbage by the corporate media. I’ve said it before when it comes to the press, truth is dead.