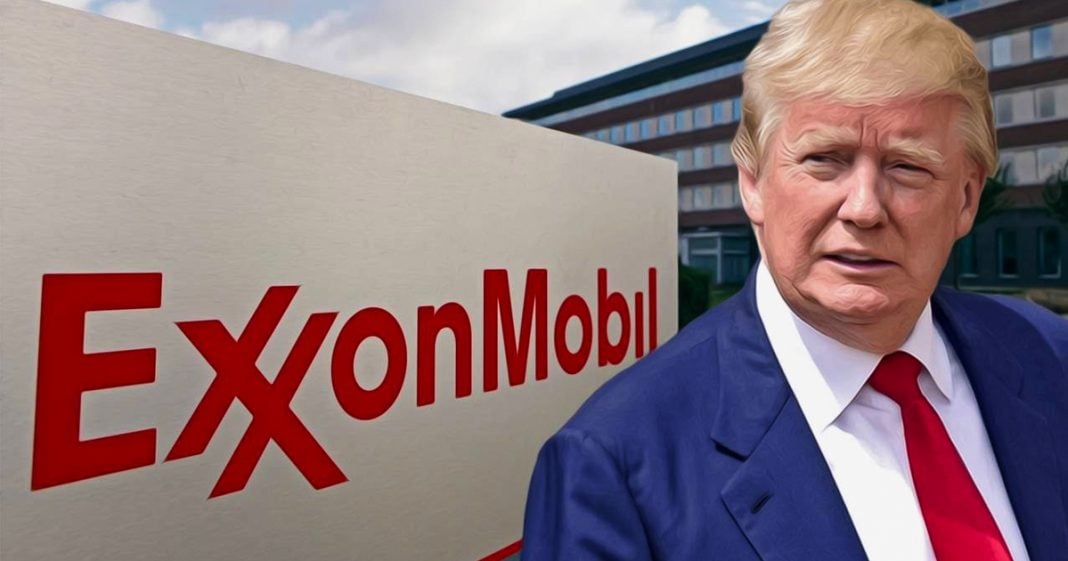 Trump’s plan to pull the U.S. out of the 2015 Paris Climate Agreement and undo the Obama Administration’s Clean Power Plan (CPP) has run into resistance from a highly unexpected source: oil company giant Exxon-Mobil.

Prior to signing the Executive Order repealing the CPP, Trump – naturally ignoring the clear majority of Americans who supported it – consulted one of the powerful corporate “persons” he really serves in order to get what he hoped would be support for his anti-environmental, pro-corporate actions.

He didn’t get the answer he had hoped for; in a letter sent only days before he signed the EO gutting new climate regulations, Exxon stated that the Paris Accord is an “effective framework for addressing the risks of climate change,” advising the Administration to stay the course. The letter added that the U.S. is “well positioned to compete” under the terms of the agreement.

Even former Exxon-Mobil CEO Rex Tillerson, now Trump’s Secretary of State, has said “ExxonMobil supports the work of the Paris signatories, acknowledges the ambitious goals of this agreement and believes the company has a constructive role to play in developing solutions.” At his confirmation hearing, Tillerson expressed support for the Paris agreement.

Exxon-Mobil’s opposition to Trump seems odd in light of the company’s history. For decades, the company was fully aware of the consequences of fossil fuels and their impact on global climate. Instead of taking action, Exxon-Mobil put all its resources into suppressing evidence of climate change as it fought to preserve its massive profits. Since 2007 however, it’s been changing its tune. At that time, Exxon-Mobil acknowledged that climate change was indeed a serious threat and that steps should be taken to reverse the trend.

In the recent letter to the Trump Administration, Manager of Environmental Policy and Planning for Exxon Mobil Peter Trelenberg (who is a member of the American Legislative Exchange Council) wrote, “We welcomed the Paris Agreement when it was announced in December 2015, and again when it came into force in November 2016.” Last month, Exxon-Mobil CEO Darren Woods wrote a blog post in support of the Paris agreement. He even supports the idea of a carbon tax.

Exxon-Mobil is not the only Big Oil player to express support for the Paris Climate Accord. Last month, Conoco-Phillips CEO Ryan Lance publicly stated that “It would be good for the U.S. to stay in the climate agreement.” Other fossil fuel companies are also backing the agreement, including BP and Royal Dutch Shell. The entire industry has committed to investing $100 million a year over the next decade to combating climate change.

It appears that Big Oil’s support of the Paris Climate Accord is motivated by “enlightened self-interest.” Natural gas exploration represents a significant portion of the industry’s revenue stream, which Woods considers to be one of the “powerful tools for meeting global energy demand while reducing emissions.”  Of course, while it may represent a viable option for transitioning to renewable energy sources, the exploration, production and use of natural gas poses its own problems – but that is another issue.

Trump his also meeting resistance not only from his own Energy Secretary, but from his own daughter and son-in-law – all three of whom fear diplomatic repercussions should the U.S. abandon the Paris agreement. The issue is creating serious rifts in the Administration, as Trump’s senior adviser, Steve Bannon, is pressuring him to pull the U.S. out of the agreement.

What will happen at this point is anyone’s guess, but one thing is certain: fossil fuel companies with major interests in the production of natural gas won’t be hurting for profits.