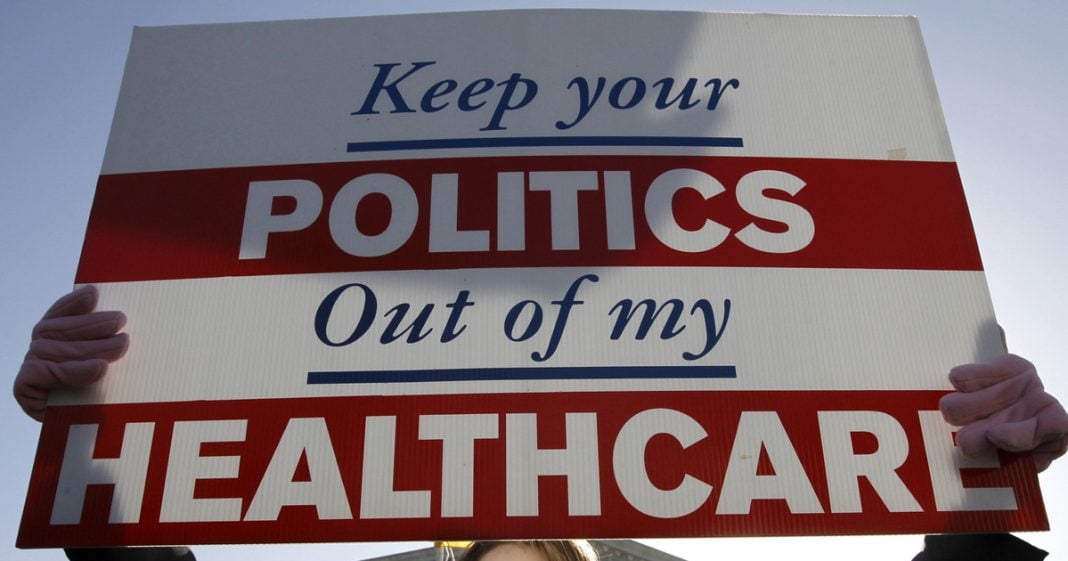 Since the signing of the Affordable Care Act in 2010, the Republican party has campaigned strongly on the promise that they will repeal and replace the law. As the party took the White House and Congress in November, it was inevitable that conservatives would act quickly and undue the ACA. However, the right has shown that they really don’t have a concrete plan for improving the country’s health care system and have failed to make any progress.

There are a few central issues at play for Republicans, in terms of finding consensus on the role of government in health care. First, many conservatives believe that government should have a minimal impact on the daily lives of its citizens. Running the country’s healthcare system is seen as a massive overreach by the government. Secondly, declaring health care a “right” in the United States is a difficult step for conservatives. Senator Rand Paul once compared health care for all to slavery, said:

Going hand-in-hand with the Republican argument is the assertion that the free-market is the best solution for health care reform. Conservatives see the government’s role in medical coverage as restrictive and costly. They contend that removing regulation will allow insurance companies to compete more easily, thus driving down costs.

So, it may surprise many on both sides to hear that universal healthcare is the answer to many of the GOP’s concerns. In 1995, the Loyala Consumer Law Review published “Health Care Reform – A Free-Market Proposal,” an essay by two law students at the University of Cincinnati. The proposal calls for an increased effort to recruit more doctors and nurses, malpractice reform, and transparency from insurance companies. But, the key to truly reforming healthcare comes from an individual mandate. The proposal says:

The essay points out that true health care reform has been difficult because of the powerful lobbyists employed by insurance companies and big pharma, as well as the insistence by elected officials that any legislation be bloated by unnecessary pork-barrel add-ons.

There is evidence to support the idea that universal health care also helps encourage a free market. In 2015, Forbes reported on The Heritage Foundation’s annual “Index of Economic Freedom.” That year, the United States was found to have the 12th most free-market economy, with countries like New Zealand, Denmark, and Canada scoring higher (the 2017 report ranks the US 17th). Of the 11 countries that ranked higher, only one, Mauritius, does not have universal health coverage.

An important thing to remember is that the United States does not currently have a free-market system. As of 2012, only two other countries, Norway and the Netherlands, spend more than the US on health care. The US spends $4,160 per-capita on health care annually, not counting any tax-exemptions granted to health care. This is partially because the two government-run programs we currently have, Medicaid and Medicare, cover the most at-risk and most costly patient groups, those with low incomes and the elderly.

As you have heard in the current debate, risk pools are crucial to the cost of health care. Fundamentally, insurance is a system where healthy individuals subsidize the care of the un-healthy. If a risk pool is filled with those that are more often in need of care, the cost goes up for everyone. Universal healthcare through an individual mandate does not have to be government run, but it does greatly increase the size of the risk pools, spreading the financial burden of the unhealthy across more healthy people. Switzerland has a privately-supported individual mandate, that allows their citizens to shop across multiple companies for value, which increases private competition.

Mandating that citizens save for unexpected health care expenditures is something that has been successfully implemented in Singapore. Their MediSave program is extremely similar to the United States’ Social Security System. Studies have shown that medical bills are the main factor in bankruptcy in the US. Many people will put their medical care on the back burner in order to pay other bills, making them non-compliant and thus less healthy. Additionally, it costs billions of dollars simply trying to collect from patients that cannot pay. Ensuring that unexpected medical expenses can be paid is crucial in allowing medical providers to operate efficiently.

The point to all of this is that Republicans, even those who are true free-market supporters, should not dismiss the idea of universal coverage or mandates for savings as options on the table for reforming health care.

Unfortunately, the American public and the officials they elect are more interested in railing against the other side, that they don’t care about what will actually benefit the country. Republicans and Democrats alike are unable to see beyond partisan pride to find real solutions. Meanwhile, lobbyists are buying off our politicians at an alarming rate, rendering serious attempts at reform extremely difficult.

If Nancy Pelosi presented a health care plan that would promote the free-market, would Republicans accept it? Similarly, if Donald Trump rallied around universal health care, would the left immediately dismiss it? We must understand that a good idea is a good idea, no matter who promotes it. Right now, the GOP needs to run with the good idea of ensuring every American has access to healthcare.

Completely government-run coverage is not necessarily the answer. But, with the right system and combination of programs, the United States could find a prosperous and efficient health care system that leaves no person out in the cold.