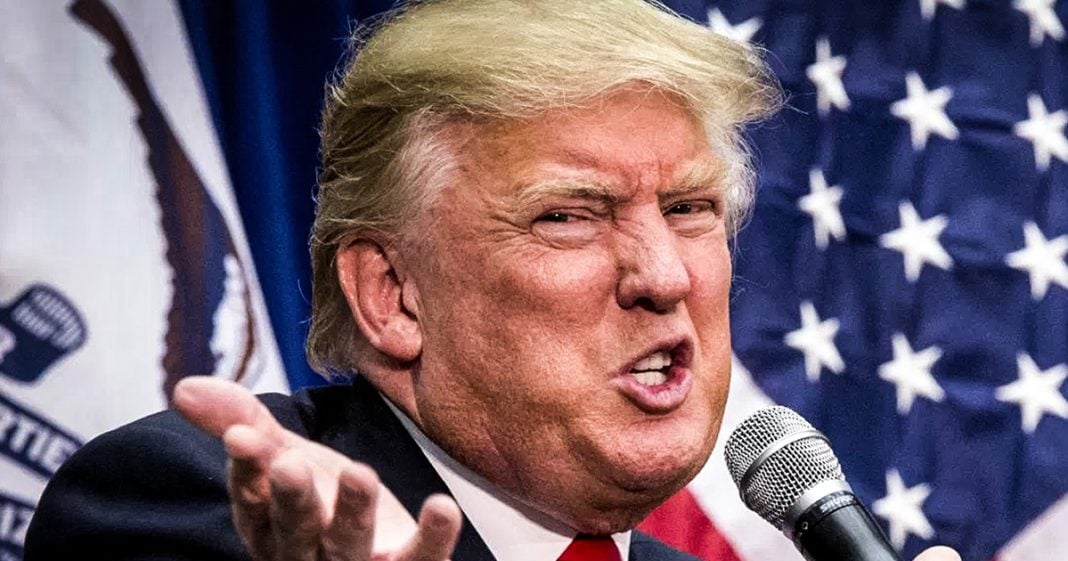 Donald Trump lashed out at MSNBC’s Chuck Todd on Twitter this weekend, calling him “sleepy eyes Chuck Todd.”  Trump was mad that MSNBC is covering the Russia story, but his personal insults based on physical appearance prove that this man has the mental capacity of a small child in grade school, and is completely unfit to lead the United States as president. Ring of Fire’s Farron Cousins discusses this.

Over the weekend, Donald Trump sent out the following Tweet. He said, “When will sleepy eyes Chuck Todd at NBC News start talking about the Obama surveillance scandal and stop with the fake Trump Russia story?” Now, a lot of people focused on the Trump Russia story from this Tweet. Few people pointed out the fact that Donald Trump, over this weekend, the sitting President of the United States, arguably one of the most powerful human beings on the planet, insulted a reporter for his physical appearance. Sleepy eyes Chuck Todd. Now, I have children that are in elementary school. I would absolutely expect to hear something like that from them, you know, if they were horrible people. Luckily, they’re not and they wouldn’t say something like that.

But, that’s the kind of mentality we’re dealing with, with the sitting President of the United States. He sees nothing wrong with going out and insulting somebody for doing their job and holding this administration accountable. Now, do I agree with MSNBC and NBC News doing nothing but talking about Trump and Russia? God, no. There are so many other issues to attack this President on and they’re grasping at straws at the moment, because we’re still waiting on more evidence on the Trump and Russia story. So, why don’t you hit him on everything else?

But, I’m not going to sit here and insult Chuck Todd or any other television new host, even if it’s Bill O’Reilly and Shawn Hannity for how they look, because that’s low-hanging fruit. That’s what idiots do. People who can’t come up with an intelligent argument always attack somebody based on their looks. And, again, that is what grade school children do, and unfortunately, that’s the kind of mindset, the kind of mental faculties that our President has. A man in his 70’s. I mean, for the love of God. This man is a senior citizen, an elderly guy who probably has lived his entire life like this though.

And, that’s the problem. We knew this coming into this election and Republicans have no problem with it. This party that claims that they have the moral high ground on every single issue has no problem with electing a bully and acting like bullies, themselves. There is no moral high ground among Republicans, yet they always try to claim it. They wrap themselves in the Bible, and instead of using that to feed the hungry and clothe the naked, they use it to justify their hate.

Donald Trump is doing that. And anyone who voted for this man that claims to have some kind of moral superiority is absolutely lying to themselves. Donald Trump is a schoolyard bully. He has been all his life and he will be, until the end of his life. Unfortunately, this is our President. We have a President who goes on Twitter and insults the appearance of other human beings. What a great time to be alive in America, right?