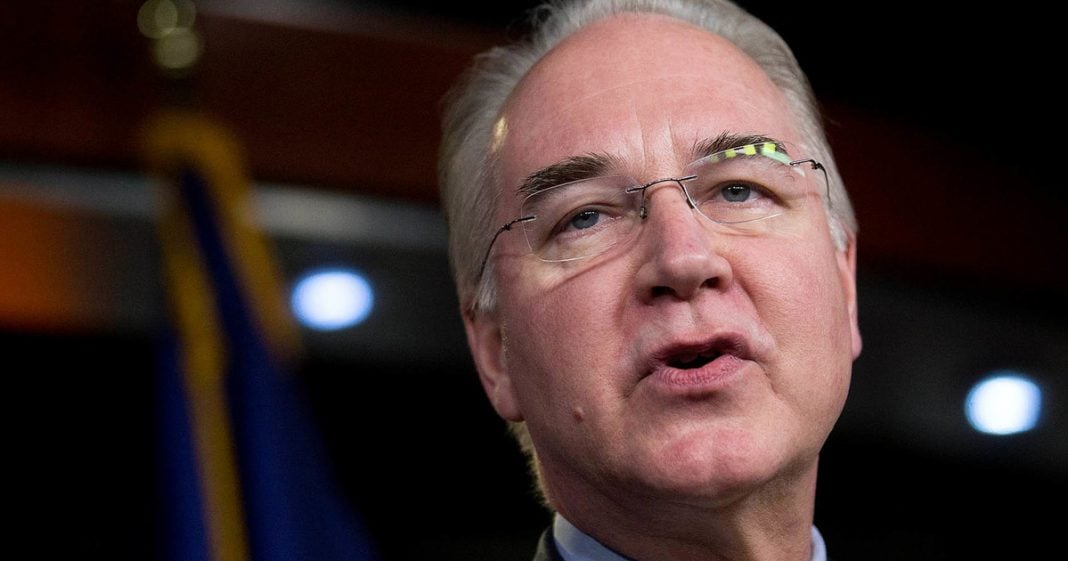 Trump’s Health and Human Services Secretary Tom Price was previously thought to be under investigation by former US Attorney Preet Bharara for suspicious stock activities. While Price served as the chairman of the House Budget Committee and was a member of the health panel of the Ways and Means Committee, he made several curious moves of pharmaceutical stock, while simultaneously using his legislative power in ways that could have affected the pharmaceutical industry.

The issues were largely brought to light during Price’s confirmation hearings, where Democrats accused him of illegal trading, possibly violating 2012’s STOCK act, which sought to keep Congressmen from profiting off of their own lawmaking efforts. Sources close to Bharara said that Price was among those being investigated for government corruption. However, an investigation was never publicly announced. Bharara was fired when he refused to resign at President Trump’s request.

“On the same day the stockbroker for then-Georgia Congressman Tom Price bought him up to $90,000 of stock in six pharmaceutical companies last year, Price arranged to call a top U.S. health official, seeking to scuttle a controversial rule that could have hurt the firms’ profits and driven down their share prices.”

The stock purchase was among those highlighted by lawmakers during Price’s confirmation in February, but his contact with the Centers for Medicare & Medicaid Services (CMS) was not previously known.

On March 8th of 2016, CMS proposed a rule that would have reduced a doctor’s incentive to prescribe expensive brand name medications, in order to encourage cheaper generic prescriptions. Medicare reimbursed doctors for 6% of the price of the drug, whereas the new rule would reduce that to 2% plus a flat fee.

On March 17th, Price’s stockbroker made the $90,000 transaction, buying stock in six pharmaceutical companies. Those six companies all lobbied heavily against the new CMS rule. That very same day, Price’s aid emailed CMS’ Chief Medical Officer Patrick Conway to set up a call that would talk about the new rule. The call was scheduled for the following week, though it was unclear whether or not it actually took place.

On April 29th, Price co-sponsored a bill that would block the new CMS rule. In December, the CMS proposal fell apart. CMS sources told Time that the rule change failed because of Big Pharma’s lobbying and the strong actions of Congressional leaders. The ProRepublica article even points out that,

“at two of the six companies Price invested in, people who used to work for the congressman were part of the lobbying effort.”

Price is hardly the only politician in the pocket of the drug companies. Big Pharma spent over $58 million in campaign contributions and over $244 million in lobbying efforts in 2016 alone. Those numbers are nothing compared to the $400 billion that the industry rakes in annually. The industry also pays to influence scientific research, buys the influence of medical experts, and colludes to keep drug prices high. With Trump and the GOP slashing regulations, you can rest assured that those actions will continue. However, the blame doesn’t solely lie with Republicans. Senator Bernie Sanders has slammed his Democratic colleagues for not supporting legislation that would allow the US to import cheaper medications from Canada.

While the parties may argue over health care reform, Big Pharma is “making it rain” on lawmakers behind the scenes. True reform would include kicking the Pharmaceutical companies out of Washington and telling Congress that if they are on the payroll of the drug companies, they won’t keep their office. It is estimated that the country spends over $3 trillion in healthcare each year, with around thirteen percent of that total funding Big Pharma. Until we control their influence over our government, health care will remain a burden to our country.