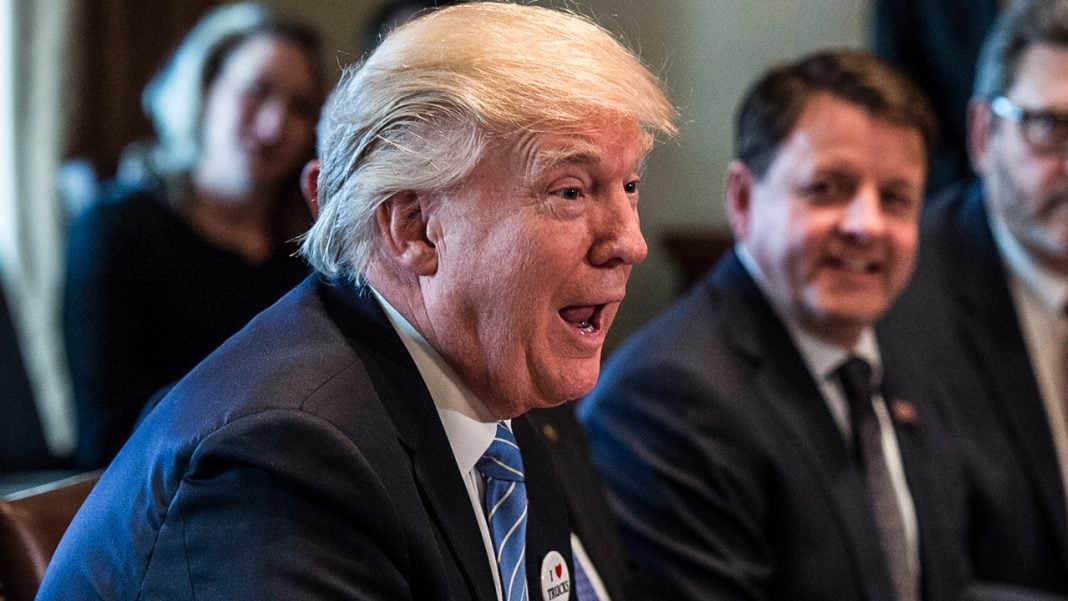 Donald Trump and the Freedom Caucus are currently in a bruhaha over the healthcare debacle, with Trump saying that the Caucus cost Republicans the upper hand in the effort to repeal and replace Obamacare, and that they could cost the Party the House in the 2018 midterms. Ring of Fire’s Farron Cousins discusses this.

Donald Trump has decided that he has a new political enemy to fight, in addition to all of the other political enemies that he is fighting in this country right now. The new enemy is the House Freedom Caucus, which is mostly made up of members of the Tea Party.

According to Donald Trump it is this caucus, the House Freedom Caucus, that cost the Republicans their Repeal and Replace bill for the Affordable Care Act. Had it not been for those pesky Freedom Caucus members we would have had that American Health Care Act passed, put in place, Obamacare destroyed, millions kicked off insurance. And somehow, according to Trump, it was the House Freedom Caucus that screwed it all up because they said it didn’t go far enough to hurt enough people, I guess.

But what’s happening right now is really interesting, because Donald Trump wouldn’t be in the position that he is in today had it not been for the House Freedom Caucus. And here’s what I mean by that:

This House Freedom Caucus basically came about from the far, far right people who really have no business being in politics. They have no idea what they’re doing. They’re a bunch of morons who can spout talking points all day long, even if they’ve been debunked. They can get crowds riled up. They can show people that “Hey, I’m just an average Joe like you but you should send me to Congress.” And they did. And that’s what paved the way for Donald Trump.

These idiots in the Freedom Caucus lowering the collective IQ of the House of Representatives is what allowed people to see that “Hey, maybe it’s not such a horrible idea to have somebody that looks like me and talks like me and is as dumb as me running the country.”

“Let’s destroy the environment. Let’s let business do whatever the hell they want, regardless of if it’s legal or illegal. And if it’s illegal we’ll go ahead and make it legal so then they don’t have to worry about hiring lawyers, because lawyers are bad. Let’s go ahead and just ship all of our jobs overseas with these horrible trade deals. Let’s put in pipeline after pipeline after pipeline. Let’s drill offshore, even though we know that these rigs can explode and destroy ecosystems. Nothing matters! Free market, right?” That’s Donald Trump’s worldview, and that’s the House Freedom Caucus’s worldview.

Their feud is only going to intensify in the coming months because neither of them really has any idea what they’re doing. They just know that “He said bad thing against us so we say bad thing against him.” It’s going to cost them both dearly in 2018, especially if Donald Trump keeps coming out saying how horrible they are. Because there’s enough idiot Trump supporters in this country that will follow him, vote against the House Freedom Caucus, thereby flipping the make-up of the house over to Democrats.

So at this point I honestly don’t know if we should just sit back and enjoy the show, or if we need to call out how stupid both of these groups are being right now. For me personally, I say let them fight. Let them go ahead and expose all the horribleness of one another, and then the American voters can see for themselves what it’s like to have a man with a mentality of a child sitting in the White House, and a group of morons sitting in the House of Representatives.