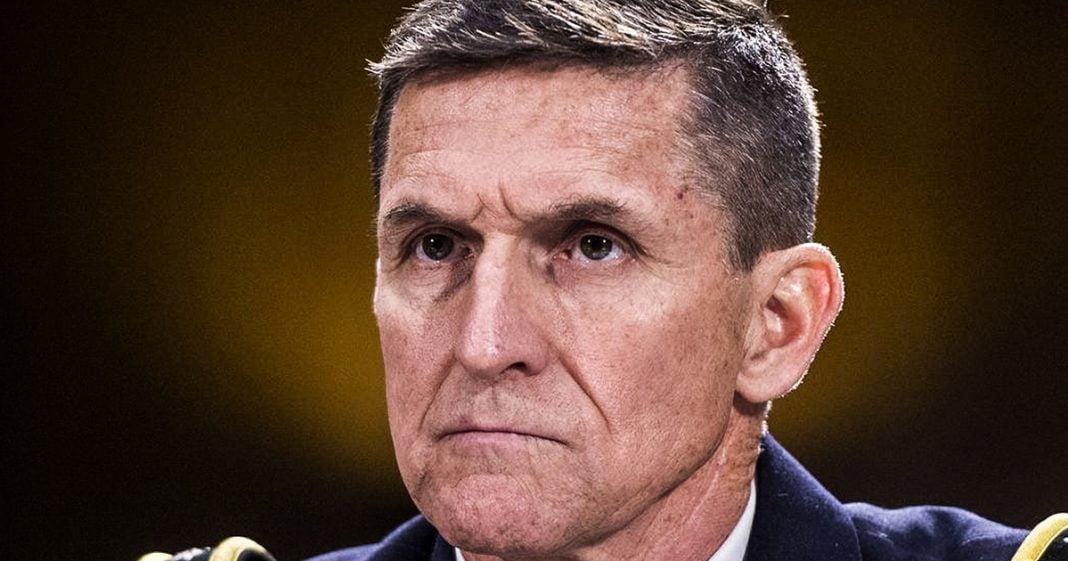 Former National Security Advisor Michael Flynn announced that he would be willing to testify on the ties between Trump and Russia if he is granted immunity from prosecution. Just a few months ago, Flynn said on MSNBC that anyone who asks for immunity is obviously guilty of a crime, so what is he hiding and who is going to go down in his place? Ring of Fire’s Farron Cousins discusses this.

When you are granted immunity, that means you probably committed a crime. That’s not me saying that, those are actually the words that former National Security Advisor Michael Flynn used on MSNBC in 2016 when he was just an advisor for the Donald Trump campaign, talking about Hillary Clinton and her staffers.

When you are given immunity, that means you probably committed a crime. Interesting statement coming from a man who just yesterday requested immunity in exchange for testifying to the Intelligence hearings on the investigation between Russia and Trump campaign connections and collusions. Michael Flynn has asked for immunity in order for him to go forth and testify, which does likely mean, even regardless of Flynn’s previous statement, if you want immunity, you have to have immunity from something, I’m assuming immunity from prosecution, which means if you think you’re going to prosecuted as Flynn has pointed out, you probably did commit a crime.

That’s beside the point right now. What we know and what we predicted last week was that the first one to talk is going to be the first one to walk, and that is what Flynn is doing here. He is trying to get himself out of trouble by rolling over on the other members of the Trump Administration and that is exactly what we have been waiting for with these investigations.

Flynn hopefully will come forward with some kind of evidence, evidence greater than just, oh, Russia created these bots to spread fake news on Facebook, not enough to really show that they interfered with the election, but that’s what the news media is running with today. Flynn can offer concrete accounts of what happened, who they talked to, who talked to whom, who sanctioned these talks, who knew about these talks, what they talked about. This might be the first time we finally get some real evidence into the collusion between the Donald Trump campaign and Russian involvement, Russian intelligence, whatever it is, whoever they talked to. We may finally get some answers.

In a very weird twist here, Donald Trump tweeted out Friday morning that he’s glad Michael Flynn is seeking immunity in this witch hunt. This is what he needs, let’s take on the Dems and blah, blah, blah. Do you understand, Donald, what’s happening here? He’s not asking for immunity because he’s going to take down the Democrats, buddy, he’s coming after you, right? This guy had to resign because he lied to Mike Pence about ever talking to the Russians and now he’s saying, I’m going to come forward, I’m going to tell you everything if you promise not to prosecute me. It’s not the Democrats that need to be worried here. It is Mike Pence and Donald Trump, because Pence was in charge of Donald Trump’s transition team. They’re the ones who vetted Flynn, so it is highly unlikely that Mike Pence didn’t know about the conversations that took place between Flynn and the Russian ambassador. He had to have known about them.

We’re talking about an investigation here that could potentially implicate both the president and the vice president. Again, the main thing we need out of this is evidence. We need to be able to prove some sort of collusion, that they worked together to undermine democracy in the United States. Spreading fake news, as deceitful as it may be, is not illegal. It is not evidence that they stole the election. Let’s stop focusing on that, okay?

If they created bots and spread articles from Breitbart and info wars on Facebook, that’s disappointing that people are that easily duped by those stories, but they would have found them anyway. I mean, really, if somebody reads an article on Breitbart and suddenly goes from Democrat to Republican, they were never a Democrat to begin with, so let’s leave the whole bot bullshit out of it and focus on the fact that we now have a former member of the administration, a former member of the campaign, willing to come forth and roll over on everyone else so that we can finally get the information and evidence that we need to take down the Trump Administration.