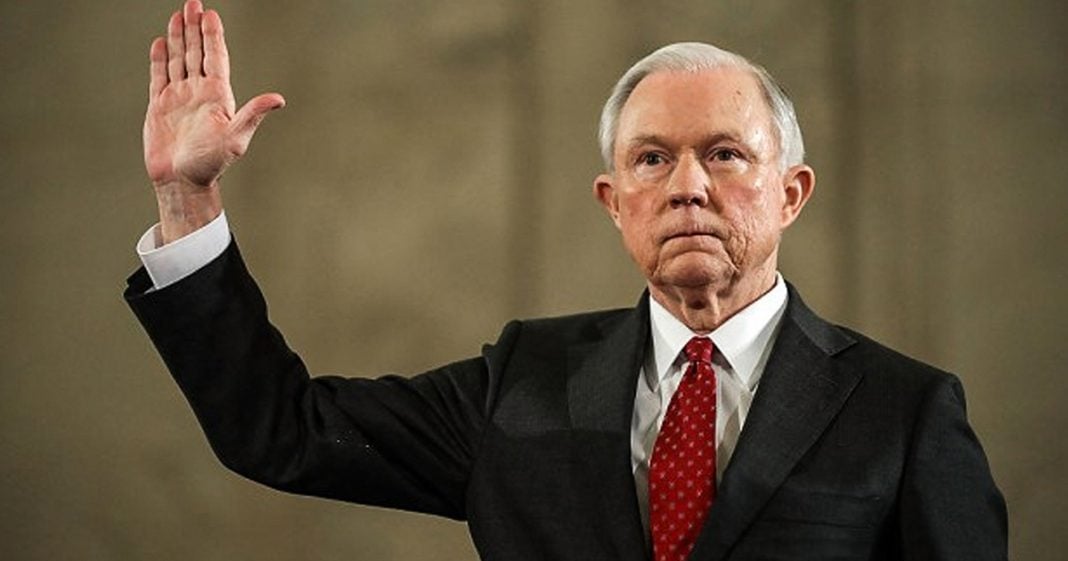 Attorney General Jeff Sessions has made a lot of enemies during his career, and those enemies are now calling for him to be disbarred in the United States for his corrupt and unjust practices in the name of the law.  More than 2,000 attorneys from across the US have asked that the AG be disbarred from practicing law, a move that would effectively disqualify him from his current job. Ring of Fire’s Farron Cousins discusses this.

While our new Attorney General Jeff Sessions is busy out there spouting these old, tired, worn out and completely false talking points about we need to crack down on marijuana and how it’s just as bad as heroine, attorneys across the country in the United States are actually working to get this man kicked out of office. More than 2,000 attorneys in the United States have signed on to a petition to get Jeff Sessions formally disbarred from the Alabama Bar Association, effectively preventing him from being able to practice law and most likely getting him completely kicked out of office. Now this isn’t just because they hate Jeff Sessions. It’s because of his history of corruption and lying to both people in the legal community and the American public. Specifically, they’re talking about the fact that he lied under oath about the fact that he allegedly never met with any Russians ever.

Now remember, Sessions offered up that information voluntarily. He was not asked, “Did you meet with Russians?” He brought that up when questioned by Al Franken. He said, “I never had any contact with them.” The questions that Franken asked were simply, “Would you recuse yourself?”, which he has now done, but lying under oath is typically a major crime in the United States. If you recall, that’s actually what caused former President Bill Clinton to be impeached. Lying under oath can get you sent to prison. Lying under oath can ruin your career and will get lawyers disbarred, and has in the past. That’s what these attorneys are working on right now. Jeff Sessions lied under oath. There is no question about that, except maybe amongst hardcore Trump supporters, but the rest of us in reality understand that this is what he did. We can compare his statements to the information that has come out since then and Sessions’ own admission since then, and determine yeah, he lied. That should get him disbarred.

It should get him removed from office completely regardless of the disbarment, but since apparently that’s not going to happen because as Rand Paul said, Republicans don’t investigate Republicans, these attorneys have taken it upon themselves to do the work that Republicans in Congress are too cowardly to do, too boneheaded and naïve, they think that all the horrible things happening with inside the Trump administration, those aren’t going to affect your average everyday Republican congressman in the next election, but it will. Talking points like Jeff Sessions lying under oath and Republicans doing nothing about it are going to stay talking points until after the 2018 midterm, possibly even into the 2020 election, and that’s what has to happen.

People in this country need to remember that we know Jeff Sessions committed perjury. He committed a crime and the Republicans in Congress just sat there and let him get away with it.