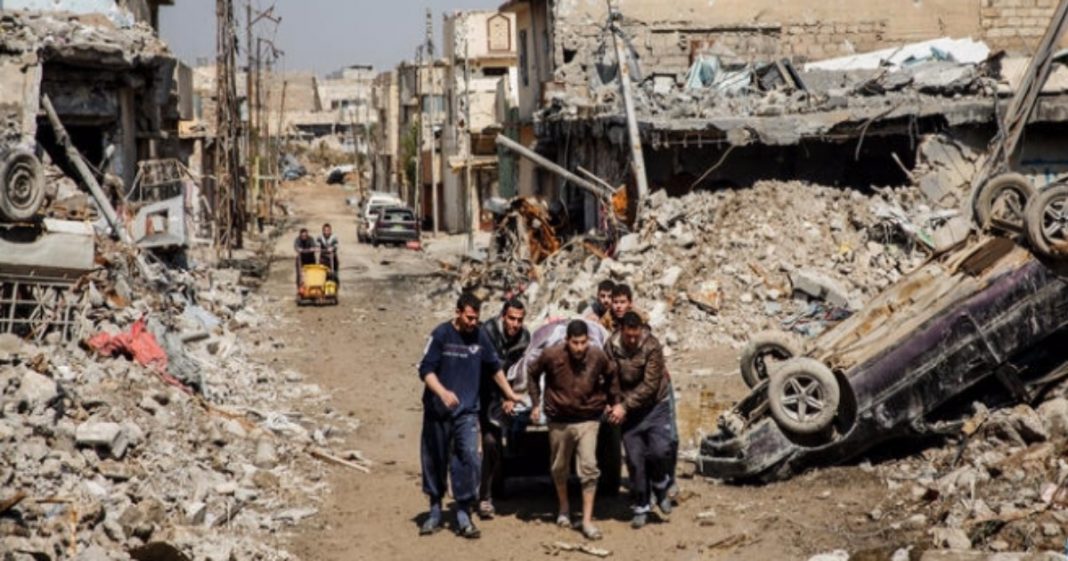 Last week, U.S. military officials reported that as many as 200 civilians – or more –  were killed during airstrikes against an ISIS stronghold in the northern Iraqi city of Mosul. Speaking with NBC News yesterday, Lt. General Stephen Townsend acknowledged that there is a “fair chance” that U.S. forces were responsible. He added that it if the reports were accurate, it was an “unintentional accident of war.” But it also may very well be a consequence of the Trump Administration trying to rewrite the “Rules of Engagement.”

More details have been emerging from news sources abroad. According to the Kurdish media outlet Rudaw, the number of dead is closer to 240. Of those civilians, 137 had been taking shelter in a building in the al-Jadida neighborhood, while others had been in their homes. Some victims, still alive, wound up buried under rubble for several days. This incident is possibly the biggest killing of civilians since the U.S. invasion of Iraq in 2003.

The deaths occurred in two separate bombings. One was carried out on March 13th and the other on the 18th. Buildings in the neighborhood were completely destroyed. According to survivors, ISIS snipers who had been stationed on rooftops and were destroying vehicles on surrounding streets were the the targets of the bombing. However, those militants were not on every building that was destroyed. Speaking to the New York Times, Ali Abdulghani pointed out that “Not all of the houses had Daesh [ISIS militants] on the roof…why, just because of one Daesh, kill everyone?”

Why indeed? Part of the reason is that since December’s “surge” into the ISIS-held city, U.S. military advisers have greater authority to order airstrikes without prior approval from headquarters. However, much of it has to do with the Commander-in-Chief – Donald Trump – pressuring U.S. forces to act more quickly and ratchet up efforts to take Mosul. This has given commanders less time to plan attacks and assess the risks of “collateral damage.”

A U.K.-based monitoring organization, Airwars, reports that so far, over 1,300 civilians have died as a result of U.S.-led airstrikes in the region – more than those caused by Russian forces in Syria. The recent increase in these deaths began under the Obama Administration, but Trump has been ratcheting it up since taking office in January.

In fact, Trump has been planning to escalate the conflict since December when his transition team began inquiring into restrictions and limitations on the use of U.S. troops abroad – including rules on how special operators can get to the war zone and who they can target.

During his campaign, Trump frequently criticized the rules of engagement. Last year, he told Fox News, “We’re sending leaflets down [saying] ‘in an hour we may be bombing your truck.’ Please remove yourself .” Apparently, he didn’t – and doesn’t – believe such advisories are warranted.

Trump also declared his intention to escalate the war on ISIS. A few weeks ago, the New York Times reported that the Trump Administration was “exploring how to dismantle or bypass Obama-era constraints intended to prevent civilian deaths from drone attacks, commando raids and other counterterrorism missions.”

It appears that the result of this “exploration” is the deaths of as many as 240 non-combatant civilians. If the United States is attempting to “win hearts and minds” in this ongoing “War on Terror,” this is not the way to go about it. This type of approach will not make Americans any safer, and in fact, will only exacerbate the dangers. Trump’s simplistic mentality – which he summed up neatly last year when he said, “I think Islam hates us” – is only going to breed more terrorists and alienate Muslims in the region who would otherwise cooperate with the U.S. and its allies.