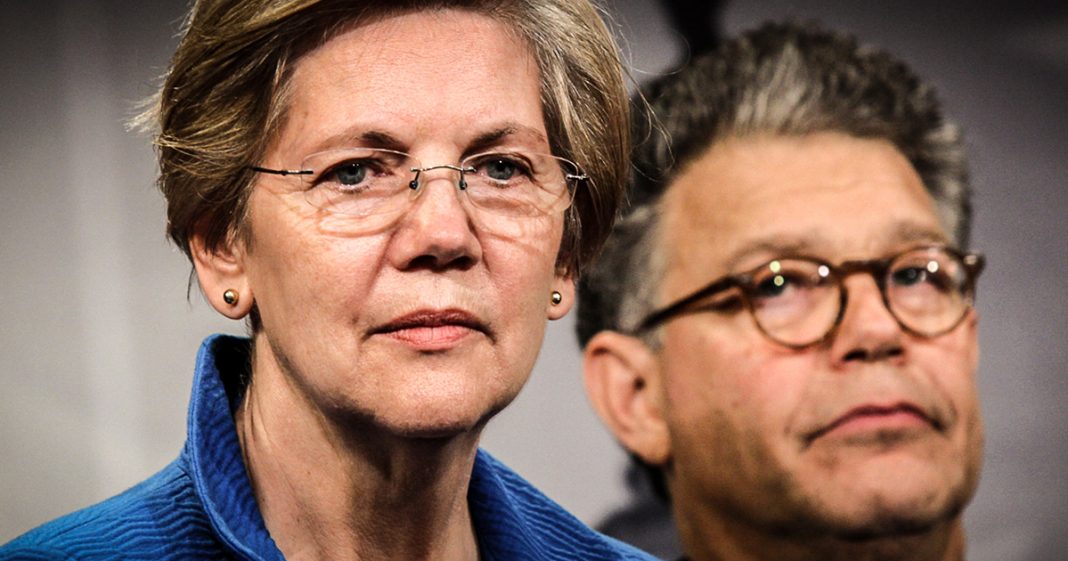 A group of Democratic Senators, including, among others, Al Franken, Elizabeth Warren, and Independent Senator Bernie Sanders, have introduced legislation that will significantly lower the cost of prescription drugs for American citizens.  Trump told us during the campaign that we needed lower cost prescription medication, so will he hop on board with the Democrats’ plan? Ring of Fire’s Farron Cousins discusses this.

The Democratic Party is actually not wasting any time trying to capitalize on the failure of the Republicans to repeal and replace Obamacare. Now last week I pointed out the fact that the Republican Party was at an all-time low, and Democrats were doing very little to capitalize on it, but it turns out, this week, they’ve decided to strike while the iron’s hot and a group of Democrats, including Independent Senator Bernie Sanders, have introduced legislation that would lower the cost of prescription drugs for citizens in the United States. Here are the people who have helped to introduce this legislation. This is a list of Democrats.

You have Al Franken, Bernie Sanders, Sheldon Whitehouse, Sherrod Brown, Amy Klobuchar, Elizabeth Warren, Tammy Baldwin, Jack Reed, Kirsten Gillibrand, Maggie Hassan, Dick Durban, Chris Van Hollen, Jeff Merkley, Tom Udall, Richard Blumenthal, and Corey Booker. These people typically don’t always agree on everything. In fact, Corey Booker earlier this year, along with a couple other names on that list, find themselves on the opposite end of the lower prescription drug cost legislation, but now, they understand with the huge public backlash that took place, that they can no longer sit on the sidelines or make up these phony BS excuses as to why they don’t want to lower drug costs for Americans in the United States.

Now the specific piece of legislation that they have introduced would allow Medicare to finally negotiate drug prices with the drug companies and would allow for the importation of cheaper prescription drugs from other countries, provided they go through the same testing that we do here in the United States, which is virtually none. It acts as the monopoly that drug companies have over their patents, and it prevents them from preventing competitors from entering the market. See that’s something that up until now had not necessarily been addressed and it’s an issue that really hasn’t been talked about all that much.

Drug companies today will pay off their competitors to delay the release of a generic or alternative version of the product that’s currently out there. Drug companies have a patent on their drug for 10 years. After that time, generics can emerge, other products with the same formula can come out and drug companies will pay these competitors, in what’s called a pay for delay scam, so that they do not release these drugs allowing the drug company to rip us off for a few more years. This piece of legislation specifically targets that act.

Again, I’ve said this a thousand times, the high cost of prescription drugs is a uniquely American problem. Other countries do not go through this. We pay markups anywhere between 5000% and 20,000% depending on the prescription drug. Drugs like Xanax, Lipitor, the markups on those are upwards of 20,000%. Other countries, Canada, sometimes they pay 200-300% markup, maybe, in extreme cases, upwards of 1000% markup. Keep in mind again, the standard in the United States is about 2500-5000% markup. Canada has nothing like that. Most industrialized countries in the world have nothing like that, but we do, and it’s not because these drug companies want to make up the cost of research and development, because most of that is actually already paid for by the taxpayers because the government subsidizes that with federal money so drug companies aren’t paying that.

They’re trying to recoup the cost that they spend, billions of dollars a year, to directly advertise their drugs to you, so that you see them on TV during the nightly news or while you’re watching Wheel of Fortune. So that you can go to your doctor the next day and say, “Hey, I saw this amazing drug on TV. Prescribe it for me.” A doctor without any scruples isn’t going to hesitate because they get kickbacks often and say, “Hell yeah. Here’s your prescription. Thanks for watching.”

The Democrats are trying to limit this, but we will not get rid of this problem until we get rid of the direct to consumer advertising of the big drug industries. We have to stop that, because that is the number one driver of the high cost of prescription drugs in the United States. It is refreshing to see this group of Democrats and Bernie Sanders working together to do as much as they can to help lower the cost of prescription drugs at a time when the Republican are at their weakest. This is an issue that Donald Trump said we need to take care of while he was campaigning. He said he wanted lower prescription drugs, so it’s going to be interesting to see if he goes along with them, because if he does, the Republicans will really have no choice but to support this legislation, which would be great for every single person in this country that ever has to go take a prescription drug.