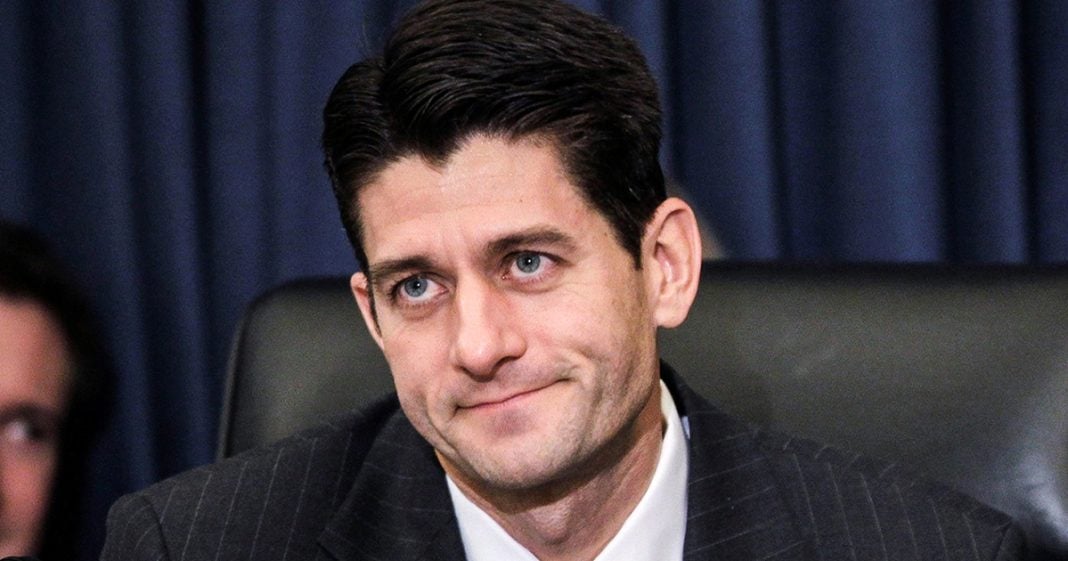 Paul Ryan is still bitter about losing the only battle he’s been wanting to fight for over half a decade, and he told Donald Trump that he’d better not work with the Democrats to craft a better healthcare plan.  Looks like Pissy Paul has some personal issues he needs to work out. Ring of Fire’s Farron Cousins discusses this.

Paul Ryan, during an interview with CBS this morning, said that he does not want Donald Trump to work with Democrats in any way to come up with some kind of new healthcare plan for the United States. Obviously, Paul Ryan is still a little bit bitter about the fact that he has been talking non-stop about repealing and replacing Obamacare for seven years, and when he finally gets the opportunity to do it, he fails absolutely miserably in front of the entire country. Yeah, no wonder Paul Ryan wouldn’t want Donald Trump to work with Democrats as Donald Trump has said that he might attempt to do. But here’s the reality of this, nobody is going to work with anybody else when it comes to making a better healthcare bill. The Republicans, including Donald Trump, do not want input from the Democrats because if they get input from the Democrats, it’s going to basically be the same legislation that the Affordable Care Act is with maybe a few provisions that are going to lower insurance premiums and lower the cost of prescription drugs. Republicans don’t want that. Paul Ryan sure as hell doesn’t want that, so of course he wouldn’t want anybody working with the Democrats.

But furthermore, the Republicans are the ones who have campaigned on this for seven years. The Democrats have not. They created the Affordable Care Act. Sure, they want to make it better, but it wasn’t a big issue for them. They moved on to other important things happening in this country, but the Republicans never did. The Democrats do not owe the Republicans their cooperation on this piece of legislation. They did their work. They did it in 2009 and 2010 when this piece of legislation was signed into law. They’ve done their part. They could make it better, and they’re trying to. There’s other pieces of legislation they’ve introduced recently to kind of further this a little bit, but for the most part this hangs on the heads of Republicans.

If Donald Trump decides to work with Democrats on making a better bill, that’s actually going to help the Republican Party, and I think Donald Trump knows that. If, by the end of this year, we get a new healthcare law, even if it is a bi-partisan law, even if it’s 90% written by Democrats, the Republicans are the ones who get credit for that. Donald Trump knows that and that’s why he wants to work with them. Paul Ryan, being the pissy little man child that he is, doesn’t quite understand that, so he is willing to take his legislation and go home because he doesn’t want anybody working with those pesky little Democrats who foiled his seven year plan.