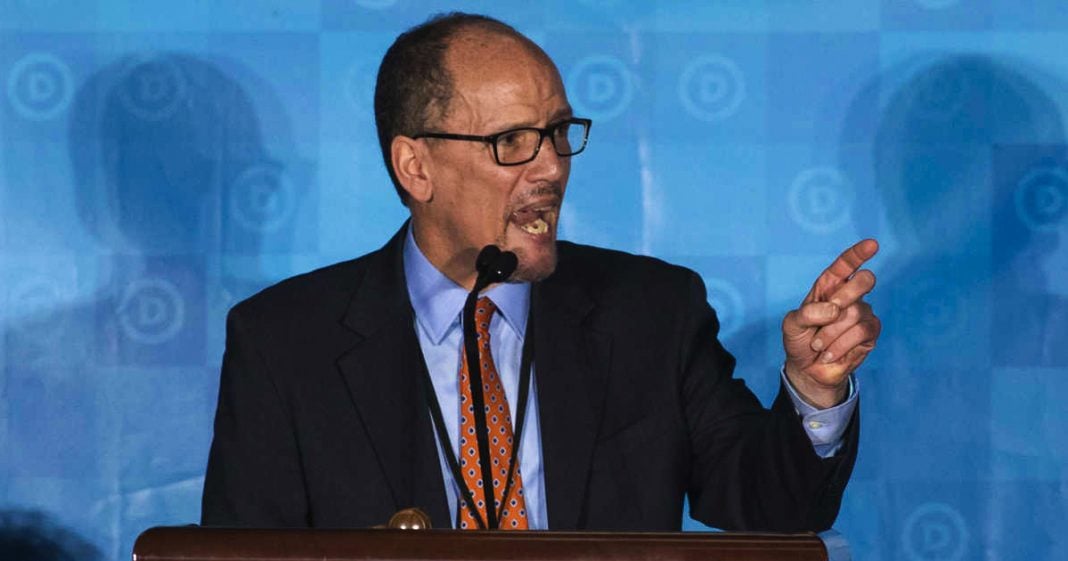 It appears that the Democratic National Committee is ready to finally move on from their crushing defeat in November, with newly elected chairman Tom Perez asking the entire DNC staff to resign by April 15th.

Faced with an ongoing battle between the establishment wing and the more progressive members of the party, the DNC needed to shake things up. On Friday, Perez told NBC:

“What we’re trying to do is culture change. We’re repairing a plane at 20,000 feet. You can’t land the plane, shut it down, and close it until further notice.”

While mass turnover is common after a leadership change, the more left-leaning Democrats feared that former Labor Secretary Tom Perez, who was backed by veterans of the Obama administration, would be too cozy with lobbyists and would not make the necessary moves to right the party by 2018’s midterm election. Last month, Perez was chosen as chair of the DNC over Rep. Keith Ellison, who earned the support of Bernie Sanders.

The Democratic Party desperately needs to change. We can only hope that Perez will now surround himself with the right people to defeat the GOP in 2018. The performance in 2016 saw the party not only lose to a polarizing (to put it mildly) political outsider in Donald Trump, but also lost control of Congress to a fractured Republican party.

“America was hurting and [the GOP] offered a plan. […] the Democrats brand wasn’t resonating with those looking for change.”

With Republicans controlling virtually all of the Federal government, the Democrats have an uphill battle to take back control. However, they have been offered a glimmer of hope as the Republican party struggles with its own infighting. President Trump has failed to gain favor with many conservative lawmakers, as highlighted by the failure of the Trump-endorsed American Health Care Act and Congressional resistance to the President’s proposed budget.

However, the Democrats have failed to capitalize to this point. Polls have shown that somehow the DNC is viewed as less favorable and less trustworthy than even the embattled President Trump, who is mired in a Federal investigation into his campaign’s ties to Russia, backlash from his outrageous claims on Twitter, and an contentious relationship with the press.

Latest Suffolk poll should be a wake up call to Democrats pic.twitter.com/OyJ1VvhRH8

If the Democrats can unify and provide a compelling alternative to Trump’s failure to produce the results he promised during his campaign, then perhaps they can re-energize the party to win in 2018. Trent says that the key to winning in 2018 is to “get people excited about politics again.”  He said that too often, politicians are intentionally vague and it is hard to get people fired up that way. Offering real solutions for jobs, education, and healthcare is how the DNC will bring passion back to the party.

Trump and the GOP are a disaster but Americans to this point have not felt that the option on the left was much better. Cleaning house at the DNC is an important first step for Perez, but he has a long road ahead to 2018.